Why, in a beginning level piece, is a repeated note split between the hands?

I wonder how are melody fingerings decided and suggested, especially in beginner books. I want to explain this with context and example.

I am 50 and being taught (for few months now) by a fairly good tutor and one of the books is "John Thompson Teaching Little Fingers to Play" (embarrassing, right? :-) ). I am finishing the book now and one of the pieces is "My Bonnie". A very easy piece, but with a confounding finger suggestion.

Any kind soul who may help with some comments and clarifications? 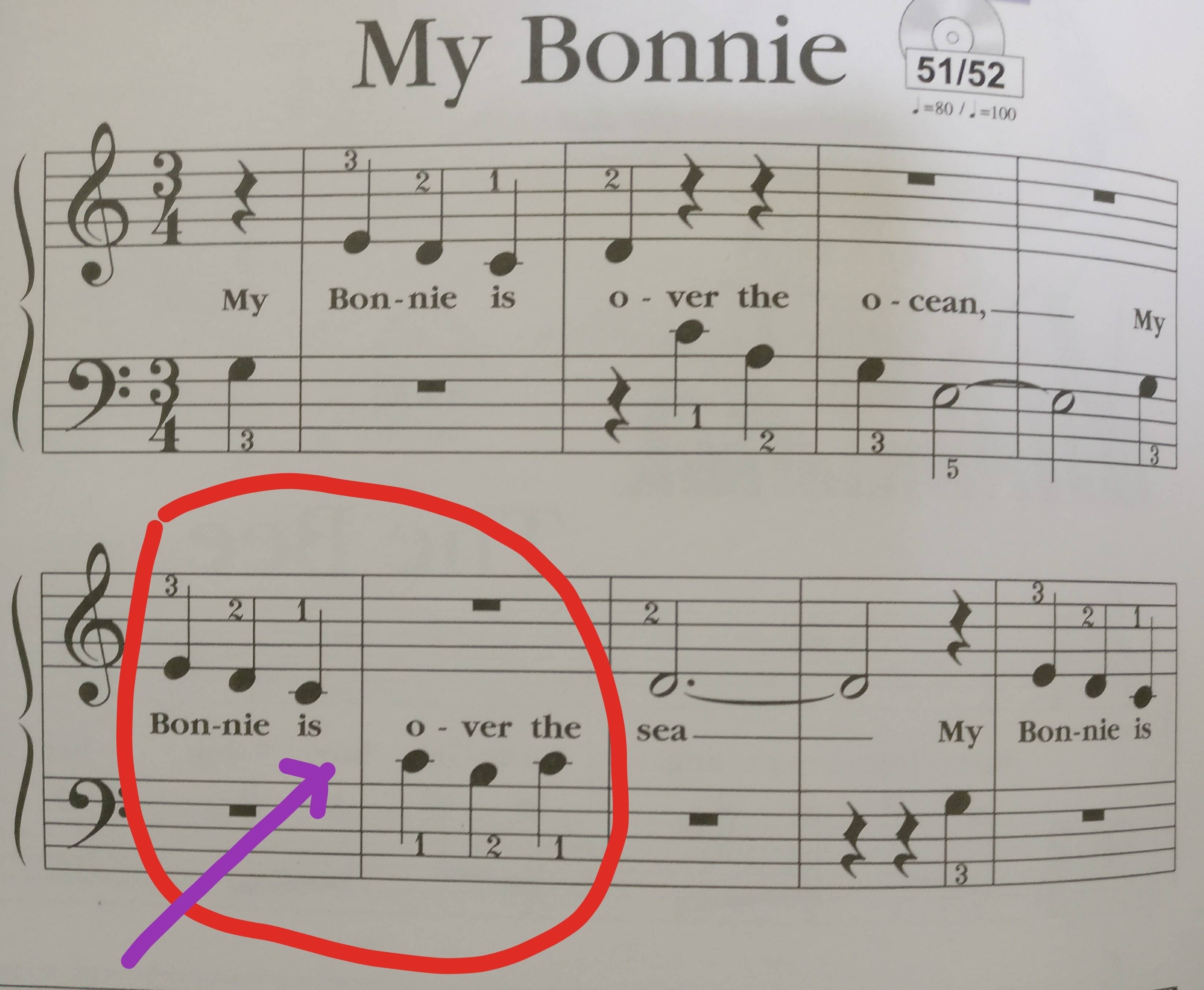 I think this is more because of some general decisions Thompson made about pedagogy, than for "musical" reasons. For example there is no reason why a more advanced player couldn't play all the notes in this piece with one hand - either right or left.

Probably Thompson decided that, at this stage, there should be no notes below middle C played with the right hand, and no notes above middle C played by the left. That certainly makes the music easier to read for a complete beginner, since the only leger line in the notation is the unavoidable middle C, but there is no particular musical justification for it, and of course most music not arranged for beginners doesn't have that restriction.

Playing a note with one hand, immediately followed by the same note with the other hand, is common enough. Beginners have to be introduced to it sooner or later, though this example is a fairly artificial situation for using it.

Apparently the editor is trying to avoid any shift in arm position, thinking that this would confuse their young learners. Having assigned the three first notes to 3-2-1 of the right hand, this means that the right hand couldn't play the B, so the entire next bar was assigned to the "strong" fingers of the left hand.

It turns out that you find overlapping hand positions more confusing than shifting positions. That's unfortunate, but the editor cannot foresee the pupils' individual reactions, only guess.

In addition to the other answers, it's worth addressing the issue of why different hands play the middle C. After all, it would be straightforward to play all middle Cs with the right hand, reserving the left hand for only the B.

The reason for the switch is related to musical phrasing. The E-D-C and C-B-C each can be treated as a single gesture. The E-D-C "gesture" is three notes moving downward one step and a time. Repeating the C "interrupts" this gesture, but starts a new "down and back" motion. That's why it makes sense to switch hands at that point.

Although a teacher might not explain this level of phrasing to a beginning student, it's built into the method so that some fingering/phrasing intuition can begin to develop.

21
When learning a piece, concentrate on playing the beginning really well or the whole piece the same?
5
Piano Exercices to go beyond John Thompson's Modern Course?
15
Playing guitar with webbed fingers
5
When learning scales, is it important to know which key is being pressed when?
1
Fingering for some arpeggios on piano (Final Fantasy prelude)
2
Jazz chords: left hand fingerings
1
Practicing piano scales
18
Piano exercises post-chemotherapy
3
How does a performer with smaller hands manage large intervals in Bach?
16
Why are there fingerings in Liszt's Beethoven's 9th transcription, a piece for a very skilled player who presumably doesn't need the finger markings?