What is the proportion of tenors?

I would like to know what is the percentage in the population that have a tenor voice.

I guess it is difficult to find this number. And I guess it changes depending on the region of the world, culture.

Actually, I would be interested in any study about the distribution of voices (tenor, etc.) in populations.

If we can't find any study, can you tell from you experience as a voice coach or singing teacher?

For males, the ordering implied by these numbers agree with this statement in Merriam-Webster, which is listed under the entry for "baritone":

baritone In vocal music, the voice or register between bass and tenor, the most common category of male voice.

For females, the ordering implied by these numbers agree with this statement from Wikipedia:

The lyric soprano is the most common female singing voice.2

In The Diagnosis and Correction of Vocal Faults, James McKinney asserts that voice types are roughly distributed on a sort of bell curve, with most people falling into the middle voice types (mezzo/baritone), which lines up pretty well with my experience.

The graph below is taken from a study on the frequency of someone's natural speaking voice and it seems to provide at least some sort of evidence that might lend support for the claim that a bell curve distribution exists for vocal classifications. I read about this study on this page, which is also where the graph is from: 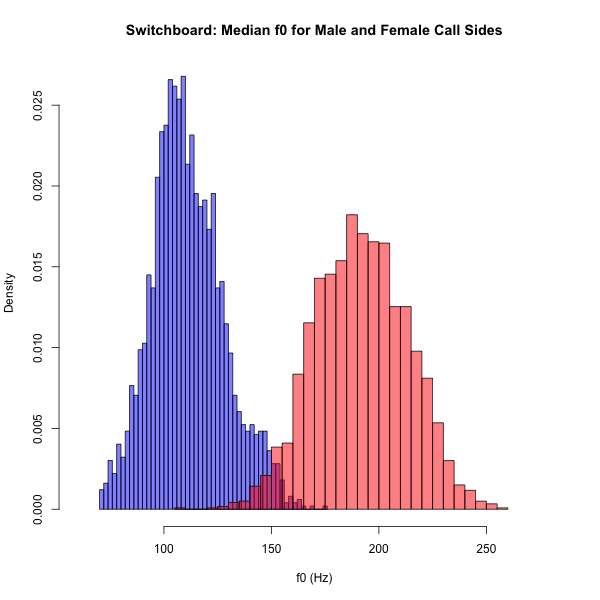 Given the information in the more credible sources, I am probably inclined to trust the rough numbers from the Reddit post. Glancing through the user TotoCotogni's other posts, he seems like a relatively credible source, as the Internet goes for hard-to-answer questions.

Note: this same question was asked in another music.SE question, but it doesn't look like a numerical answer was ever given.

Not the answer you're looking for? Browse other questions tagged voice vocal-range bass-voice tenor or ask your own question.

11
Is there a standard range for a baritone? What is it?
1
What kind of tenor will my voice lead me to (audio recording included)?
1
How long to learn/understand/master mixed-voice technique?
2
Low larynx and mask resonance
6
50 years old , haven't sung a note in my life, but
7
Passaggi, fach and volume
29
Why can I easily sing or whistle a tune I've just heard, but not as easily reproduce it on an instrument?
3
General exercise, before meeting a vocal coach?
2
Is it possible to use a vocoder to imitate another singer?