When adjusting the neck of an acoustic guitar, what bending might be normal?

Recently I bought a second guitar, before I had for almost 8 years just one guitar and did not noticed that its action was quite high. When I took the guitars of others I often wondered that they where much more comfortable to play, but I thought it was an issue of the guitar itself and I had no idea how to adjust this. As I got my 2nd guitar I noticed the same, and also noticed that the saddle was much lower.

So I did some research and found out that replacing (or sanding) the saddle can help lowering the action, so I did this with my first guitar getting the action from 6mm down to ~4mm, see the picture: 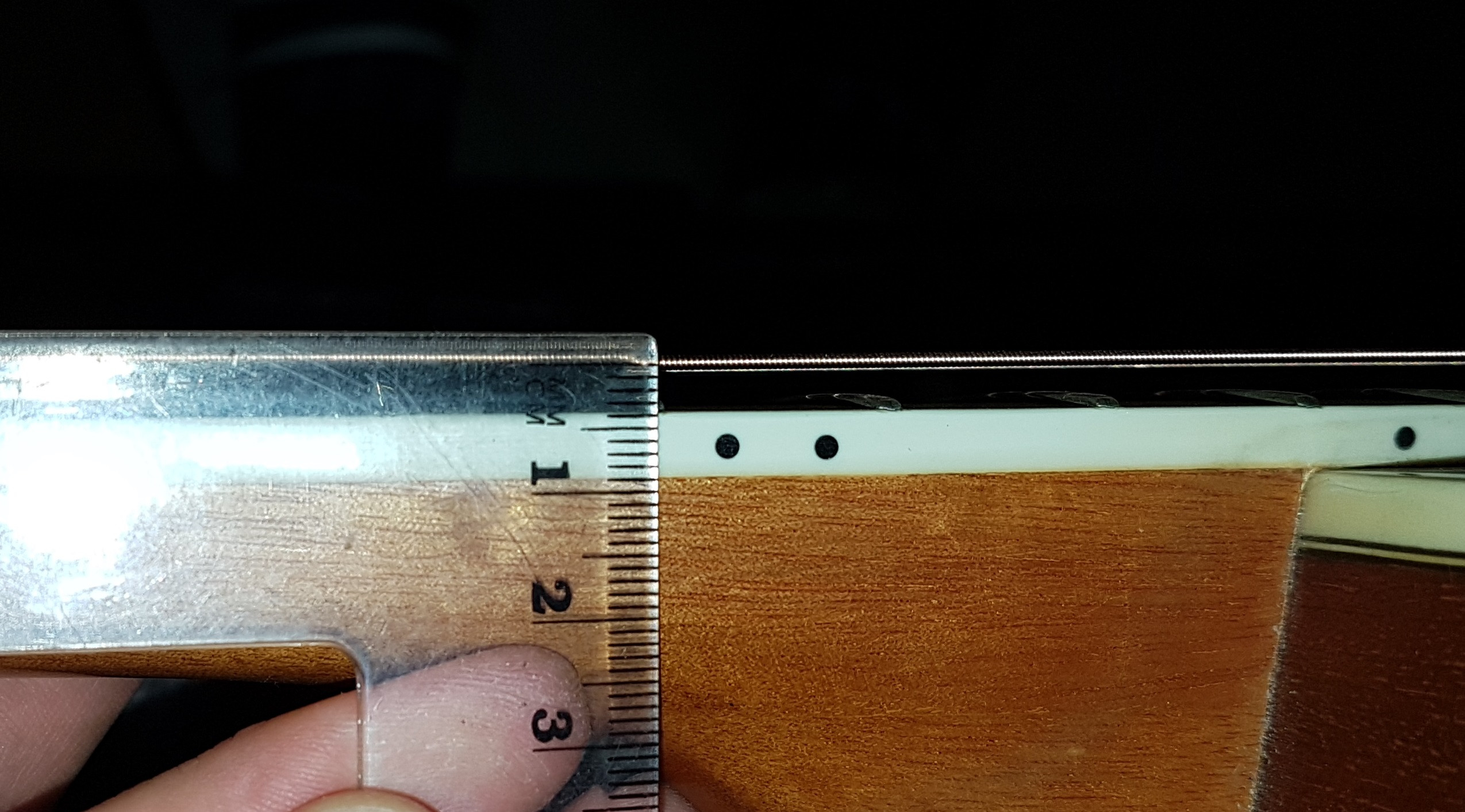 But I am trying to get it even lower, but the saddle is already quite low. So I did some further research and found out that this could be achieved by adjusting the truss rod.

But before doing this, I would like to know. What bending of the neck is considered normal? I could not find any comparing pictures on the internet, so I am asking. My other guitar has also a slight bend, so I guess some curve in the neck might be normal, but I wonder what degree might be normal (so that I do not adjust my guitar wrongly)?

I also append a picture of the neck, but on it the bend is not as clearly visible as in real life:

So what bending is normal? Or should I aim for as flat as possible?

Ideally we are adjusting the truss rod to render the neck as flat as possible without creating too much string buzz.

The three things that determine the height of a guitar's action are the nut, the saddle and the neck bow. Unless something else is wildly out of whack (like the the guitar's top lifting or the bridge peeling up), it's the neck bow that should be attended to first. Why? Well, because it works, and because you can always 'undo' an adjustment to the truss rod, but it's not so easy to restore a bit of bone/plastic that you've shaved off the saddle or nut. You've tackled the saddle first, so be aware that this will have changed the relationship between the saddle and nut heights. Don't touch the nut, though. Concentrate on the truss rod for now. The general advice for truss rod tweaking would include: loosen the strings; go slowly- a quarter turn at a time, then tune up strings and check; go gently, making sure the allen key/wrench is fully seated in the hole so you don't burr or round off the truss rod nut; never, never force it; record how many quarter turns (so you can return to the original setting), and test every string at every fret (with the guitar held in the normal playing position) for buzzing. Make sure you give it a good strum- you want to detect those buzzes. When you sight along the fingerboard it should look ever so slightly concave. If the neck looks twisted take the guitar to the repair shop or gift it to your mother in law. So in summary, try the truss rod before you attack the saddle; be aware that in changing the saddle height you affect the relationship with nut height, and make sure the fingerboard is slightly concave, not flat.

Not the answer you're looking for? Browse other questions tagged acoustic-guitar maintenance setup action guitar-neck or ask your own question.

5
Can Adjusting the Truss rod of the guitar crack the neck?
3
Risks of adjusting a truss rod?
7
How to decide what kind of truss rod wrench to buy?
5
High E string on tele has "sitar tone"
4
tight truss rod
5
Truss rod adjustment had no noticable effect
1
High action on higher fret on my steel acoustic guitar
2
Using Capo to Unstring and Restring the same Strings (Acoustic Guitar)
2
How to lubricate truss rod nut?