Alternative to capo on 8th fret

I have to use a capo on the 8th fret to be able to sing along to a song. What is an alternative to putting a capo on 8? I only know basic chord fingerings.

If there is only one set of chords that you can play, your options are limited. If you tuned the guitar a step sharp you could move the capo to the seventh fret but then you would have to re-tune to play anything without a capo that you did not want to play a half step sharp. Also, the higher string tension would exert more stress on the neck which might require a truss rod adjustment and would make the strings harder to push down to the frets.

If you are able to play enough chords to play in more than one key, you can find a different capo position that will allow the use of an alternate set of chord shapes to play the same key as what you get by putting the capo on the 8th fret using whatever chord set you are using now.

The chart below will help you find some possible alternative capo positions and corresponding chord sets. 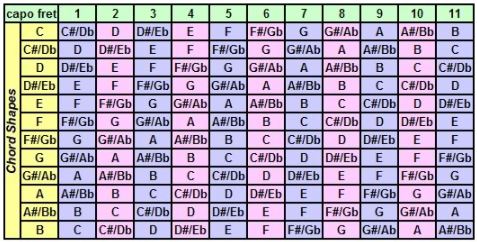 If you take one of the chords (could be major, minor or 7th degree) from the first vertical column in yellow as the chord shape you want to play, the columns under 1 - 11 will give you the chord that will it will sound like if you put a capo on the fret indicated by the number at the top of the column and play the chord in the 1st column.

So if you want to find alternatives for using a capo on the 8th fret to play a certain song using preferred chords but having the music sound out in the key you want to sing in, first know what key the chord shapes you are using now is derived from. For example if the first chord you play is a C and you also play a F and a G, you are most likely using the chord set for the key of C.

But as you can see on the chart, placing the capo on the 8th fret would make the chords sound in the key of G# (which is the same on guitar as Ab) G#/Ab is not a popular key for guitar because there are not many chords in that key that can be played in open position. So using the chord set for the key of C with capo on 8th fret will allow you to play the song more easily.

To use the chart to find other options, once you know what key you are singing the song in by playing C chords with capo on the 8th fret (in this example G#/Ab) then find other boxes where the same key appears (G#/Ab in the example). Then follow that row horizontally to the first column (yellow) and see what key is in the first box.

This way you can find other chord sets that can be used with different capo positions to play the song in the key you want to sing in but using a set of chords that are easier for you to play.

Some possibilities in our example would include Key of D chord set with capo on 6th fret, Key of E Chord set with capo on 4th fret or F chords capo 3 or G chords capo 1. So if you are comfortable with any of the chord sets mentioned above you can move the capo closer to the headstock and still play the song in the key of G#/Ab using chords from the key of either D or E or F or G.

You can use the website linked in the answer by Lee White to make the process of transposing all the chords from the set used for 8th fret to the corresponding chords used in the alternative set of chords you select.

So in the example used above, if you were playing C chords with capo on 8th but wanted to use G chords so the capo could be on the 1st fret instead, you could use the transposition chart to determine the chords in G that correspond with the chords used when playing the song using the C chord set. Technically you won't actually be transposing the song because either way it will sound in the same key (G#Ab in our example). But the methodology to determine the new chords to use for the G chord set is the same as if you were transposing from C to G.

I hope this makes sense and will help you find an alternative that works for you. Good luck and have fun!

You can set the capo to any fret you want, and then transpose the chords.

For instance, a G-fingered chord with capo on the 8th fret is in fact a Eb chord. If you set the capo to the third fret, you can achieve the same by placing your fingers in a C chord shape.

Here's a nice website that helps you to transpose chords. Play around with it and see what works best.

A capo on 8th fret transposes 8 semitones. Which is a augmented fifth. I suggest you transpose the song a fifth up (the new tonic will be the original dominant). If the original song had "nice" (for the guitar) chords, then probably the transposed version will also.

Then you could either add a capo on the first fret (if you want an exact equivalent to your 8-th fret), leave out the capo and sing a semitone lower (it should make little difference, if it's only a matter of voice accomodation).

Simplest solution, giving you only one 'nasty' chord - F - is to capo on fret 3, and change all the names up four letters. Thus Em > Am, Bm > Em, Cmaj7 > Fmaj7, G > C and so on. Same key as before, mostly friendly chord shapes, comfy capo position.

7
Is it OK to play guitar with capo on 5th fret, since I have arthritis in thumb & finger joints?
2
Transposing on a guitar
3
How to play chords from a tab where a capo is used
3
What does a capo really do to chords?
2
guitar scale when using capo
0
Tuning Guitar with Capo
4
Key of a song with capo on the 4th fret
1
What is the equivalent of F no capo with 3rd fret capo
1
Understanding How the Guitar Capo Changes Chords
2
Which Fret do I Indicate on an up-the-neck chord chart that is using a capo?