I am new into turkish music (actually I am new into music theory in general). I opened this post because I wonder why just some few makams from all the possible ones are used.

I guess that the main reasons are subjective after centuries of searching for the most beautiful ones. However, without any background into music theory, I studied with my field of expertise why some makams are more popular than others. But I would appreciate any other explanation.

With 53 commas, there are 210 tetrachords-series than span 22 commas, and 4060 pentachords-series than span 31 commas. This translates into 11130 (210 x 53) possible tetrachords and 215180 possible pentachords (4060 x 53). However, as far as I know, not all the commas are used in the turkish music, but just some of them [2]. This means that most of tetrachord and pentachord series cannot be transposed to all positions because some notes cannot be played. For example, with the 32 common commas, the tetrachords are reduced to 1936 and the pentachords to 21760.

The total number of makams is not the multiplication of the later numbers, because the first note of the pentachord is the last note of the tetrachord. The actual number of possible makams with the 32 commas is 762960 in 237106 makam-series, which is still a large number. 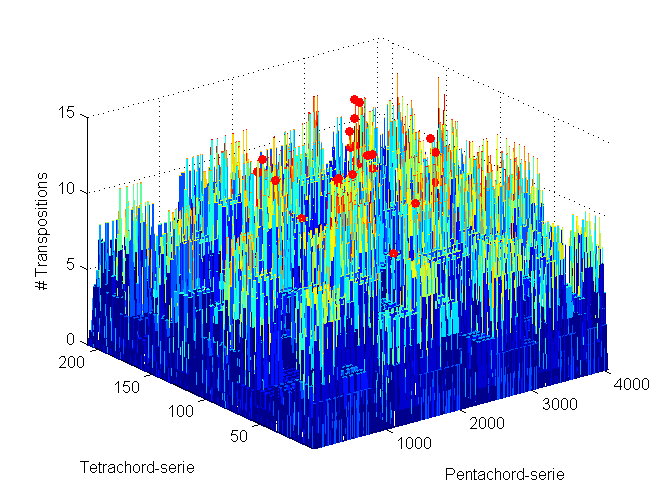 Most of the combinations (around 70%) can never be played. What I found interesting is that the basic makam-series are actually the ones that can be transposed the most, which is not surprisingly because I guess is essential when combining instruments with different tuning.

For example the Çârgâh/Çârgâh, Bûselik/Çârgâh and Kurdi/Bûselik combination can be reproduced at 15 different notes, while the Hicaz/Hicaz just at 8 notes.

In the next figure I show the total number of times a tetrachord/pentachord-series can be used. The red spots are the basic series in the same order I described above. The Kurdi, Bûselik, Çârgâh are the ones that can be reused the more, but there are other series that seem more suitable for music composition than the Usak, Rast or Hicaz. I wonder why and if there are other issues I am missing. 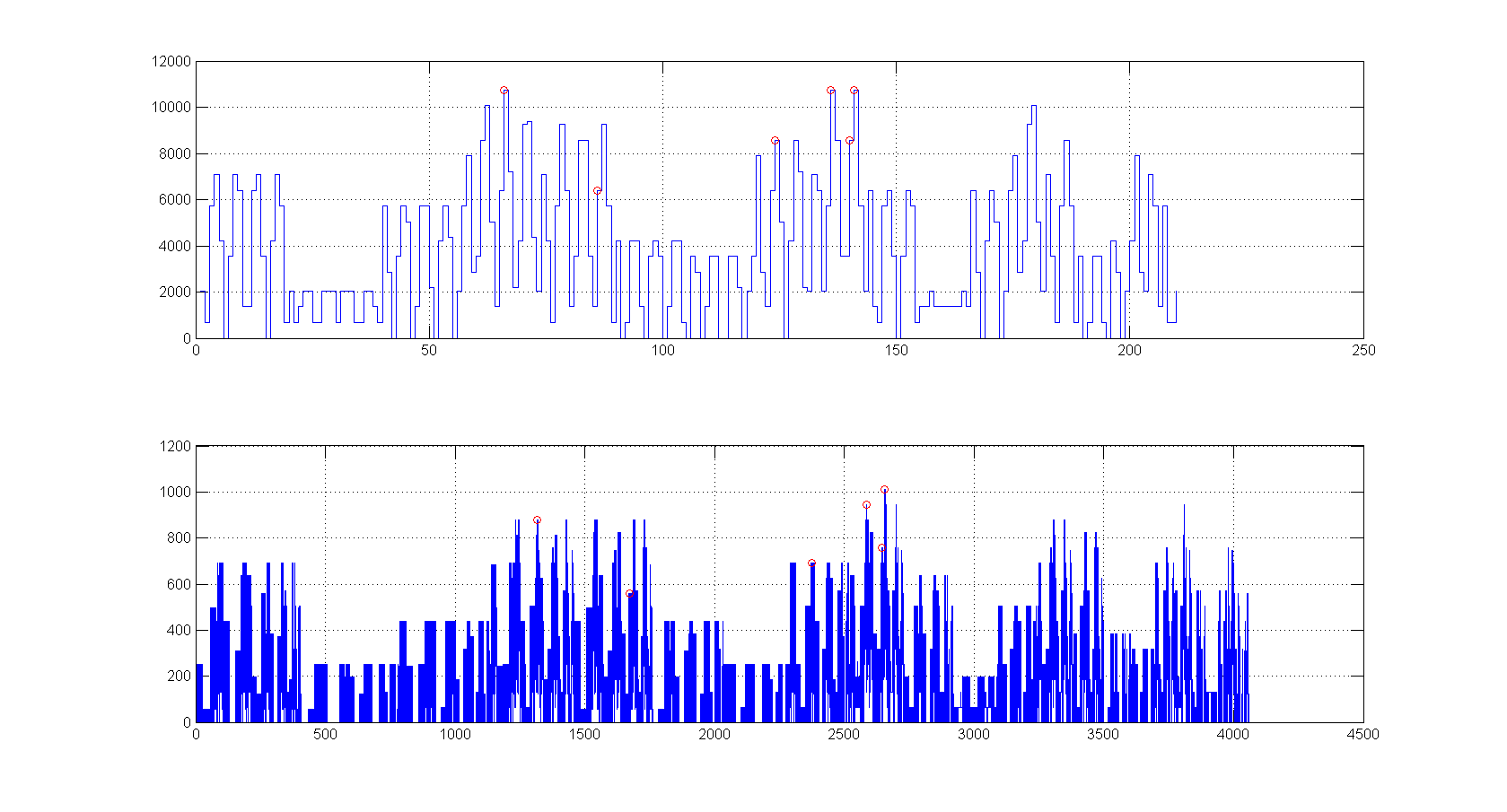 With due respect to your field of expertise, the approach you're using to understand Makam music has so many flaws and the subject is so extense that it's difficult to clarify by just writing a single answer in this page. I'll do my best to summarize and resume my points and will be open to provide more information if necessary.

The main flaws I see in your thinking are 2:

First of all, you need to be aware that all the 53 commas theory is just a single theory between many that got widely spread, has become quasi-official (in Öztürk terms), and most accept as valid to explain Makam music while the truth is that it tries to explain music performance by some standards that do not purely reflect how Makam music works. You need to understand that this theory was born out of Arel, which was a theoretician that worked in the historical context of the decline of the Ottoman period and the search for modernization of the Turkish republic (by imitating Western standards). Ezgi and Yekta also wrote "modernized" theories in this direction. This meant conservatories were established that worked on a Western fashion, and some tried to make Makam music fit into such Western standards as well. This is why according to this theory Makams are built with an octave scale skeleton. Again, this is very misleading since Makam is neither a scale nor spans an octave. Even though trying to understand Makams in terms of pentachords, tetrachords, and trichords (the later you seem to miss) can be useful to understand the material a Makam works with, same basic material between Makams doesn't necessarily mean same emotions/interpretation/intonation (this means commas are useless if you want the true feeling). Another misleading invention is 53-TET theory. In such, the octave is divided into 53 equally-distant tones and then from those we would choose the ones that are close to the perde (pitches) used in a given Makam. The problem is not all tones reflected the performance practice. Another problem with this is that there's no single position for a perde, and depending on the Makam, some perde are soft and very moveable, acquiring different values depending on phrasing (and of course, "out-of-comma" values). The most common example is the Segah perde. The phrasing dictates the actual intonation.

You can still move on with your plot and even create a whole thesis about it, which may appeal to musicologists, but musicians that are aware of the issues I mentioned will struggle to find any value on it.

Music does not start from calculations, music is an art that is born out of emotional dimensions. This is why Makams are created and arouse new beauty or feelings, not just because they were theoretically possible.

I further recommend you to read the How was the traditional Makam theory westernized for the sake of modernization article by Öztürk for more in-depth information about the issues I mentioned.

1 comma is not used so 5 intervals are used to create tone-series.

Here are the all possible intervals for tetrachords.

These series are theoritically produced tetracords. I think other tetracords not have beatiful sounds

Also makams are not only scales. Scales is only helps understanding of makams

19
Where should I go to learn about non-Western scales (particularly Turkish & Greek)
7
Why is Mozart's Turkish March considered a rondo?
4
Why D sharp not E flat in Turkish March
0
Exhaustive list of chord (at least triad and dom7) functions for a software ear training tool
2
How many natural scales are possible?
10
Lilypond - Custom Key Signature for Turkish folk music and microtonal accidentals
1
Key and possible missing “tonic chord”
6
Is it possible to generate a perfect sawtooth wave?
1
George Van Eps says there are 364 million note combinations, but I can't compute this number