How do I go about playing 32nd notes?

I'm an intermediate alto saxophone player and I'm currently learning to play Milhaud's Scaramouche, III - Brazileira. The problem is the last sequence of 16th and 32nd notes which are extremely hard for me to get down. I can do them clean at around 138 for an eighth note but it's hard to go any faster without making my hands fly everywhere and sounding uneven and wrong. Here are the relevant measures (circled in pencil): 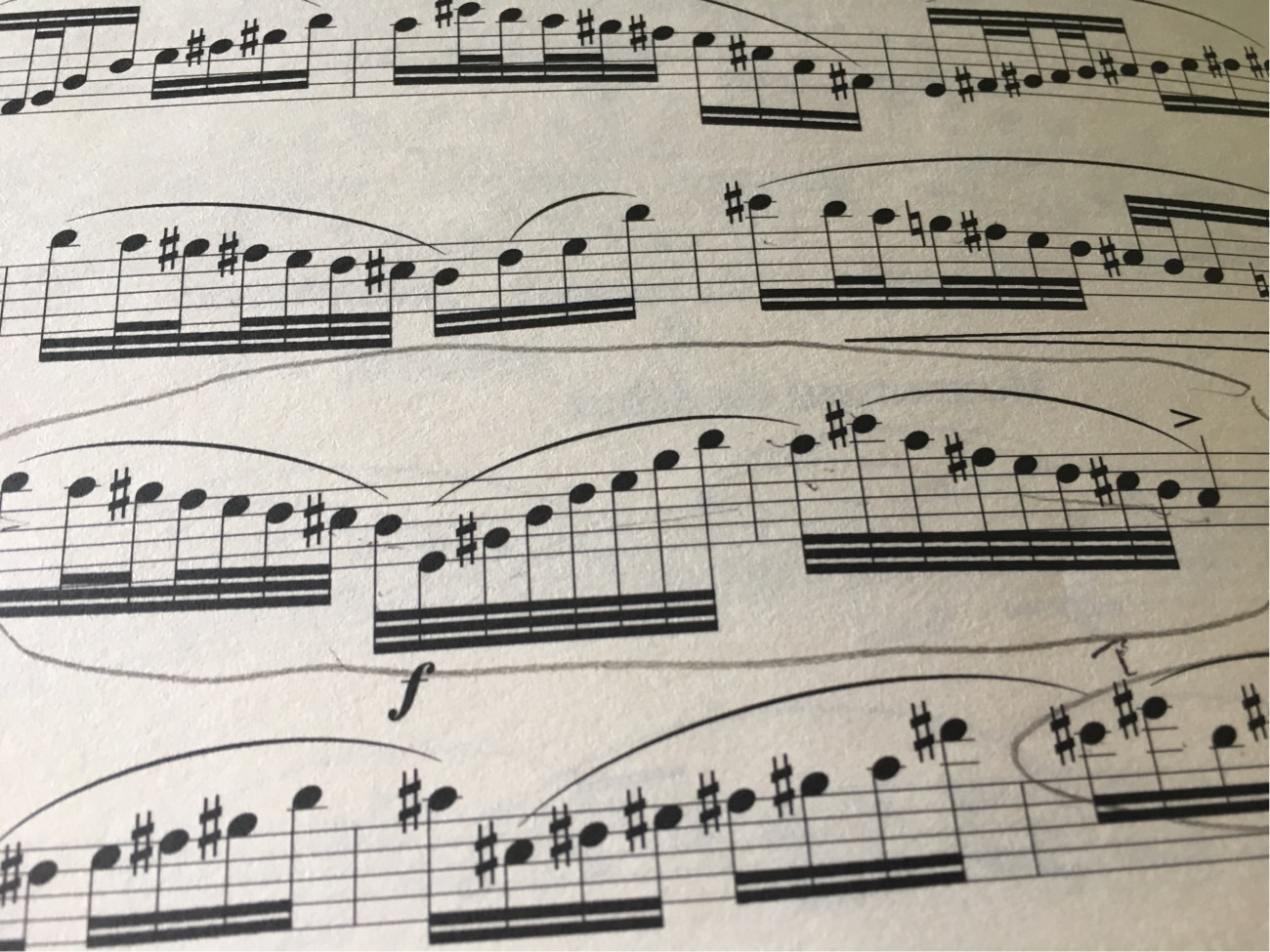 My target tempo is around 168 for an eighth note. What are some tips to getting it clean and especially getting my posture correct so I don't have my hands flying everywhere?

I'm going to suggest two primary techniques for working up a line of fast passagework like this, but in the end I would suggest combining the two processes into one. Also, I'm changing the 32nd notes to sixteenth notes in my examples, because it makes them easier to read and, at first when you're practicing at slower tempos, it indicates the feel.

My cello teacher called this technique "making it harder at first, so that the actual line becomes easier." The basic idea is that you'll practice the line at a much slower tempo, but change the rhythm from straight sixteenths to dotted-sixteenth/thirty-second note pairs, like this:

Initially, play the passage in this rhythm at a much slower tempo, until it's perfect (probably in conjunction with the second technique I describe below). The idea is that the slower tempo is giving your brain more time to internalize the large-scale connections, but your fingers are still getting practice in the faster connections between every other note. Of course, the problem here is that you're only practicing the quicker connection between the even and odd notes this way. That's why, before moving the tempo up, you should also practice the inverse, "Scottish snap" version of the rhythm, like this:

Now you're practicing the faster finger connection between the odd and even notes, in the context of an overall slower tempo.

Once you have both patterns perfect at the tempo, play everything as straight sixteenths a couple of times. This should feel insanely slow and easy after using the off-kilter rhythm, but it's important to synthesize everything. Now bump the tempo up a bit, and start over.

I can't emphasize enough the extent to which these techniques are best combined with each other. The idea with the second technique is to build up your finger speed (and finger calmness) within the beats, while still giving your brain time to breathe. The idea is to slowly build up a larger span in your playing. Begin by separating every "beat" (by which I mean every eighth note in the original notation) by playing all the notes up to the next beat and inserting a rest. After the rest, begin with the last note you played and finish out that beat, overlapping with the first note of the next beat. That sounds more complicated than it is, here's what I mean:

It's imperative that you maintain the overlap as shown in the example. You are practicing from beat to beat, but inserting a rest into the pattern to give yourself time to internalize everything. Obviously, this is very choppy, and you need to make sure you start building up larger-scale connections, so, once you've got this version down at the current practice tempo, expand everything by one beat:

Now you're having to get more notes in before you take a break, and it will take several attempts before you feel comfortable with it. When you are, double the length again and again until you're playing the whole passage without artificial interruption. Then, finally, bump the tempo up a titch, and start over.

One thing that will initially be complicated by both of the techniques is the overall tonguing of the pattern. Try to incorporate the actual tonguing as much as possible, especially once you get to larger spans of music. Make sure you have played everything exactly as written at one tempo before you even think about moving on to a faster tempo. This final consolidation phase should always feel almost painfully easy after the more complex versions you've practiced.

In my experience, this tends to be a frustrating process the first time I'm working on a passage. It will feel like I'm taking one step forward, only to take two steps back. However, when I come back to the same passage the next day, I'm usually shocked by how much more easily the pattern falls under my fingers. I do the whole routine again, but it's usually far easier. After a few more days, my fingers know the passage, and I can't remember why it ever seemed so difficult.

Practise in sections, so maybe divide it up into beats, and practise it until you get it perfect before moving to the next beat. Also once you have a couple down, practise joining them together.

Take a metronome and go through each section, gradually speeding it up. You should also subdivide the rhythm with the metronome.

As for your fingers, now's the perfect time to focus on them. Here are two things to focus on: - Movement - Pressure

Your fingers should be moving as little as possible. That means keeping your fingers resting on the pearls and only moving as much as you need to (for example, bottom pinkie work on both hands for low notes).

Also, you should only be pressing on the keys as much as you need to. Take a few moments to really think about how much you need to press in order to close the pad sufficiently -- don't press harder than that.

Think of both of these factors as you do this, and your fingers will be able to stay more relaxed as you go to faster tempos.

Not the answer you're looking for? Browse other questions tagged technique practice saxophone or ask your own question.