Why can't we identify melodic minor as a minor tonality?

I was reading a book (Murat Yakin's Starter's Guide to Music Theory and Analysis), and I came to this part, which I think is incorrect. It mentions that the melodic minor scale has only one minor chord (the i chord), and that this is the reason why we can't identify the melodic minor as a minor tonality, while the the notation clearly defines the ii chord as minor...is this a mistake or is there something that I am not getting? 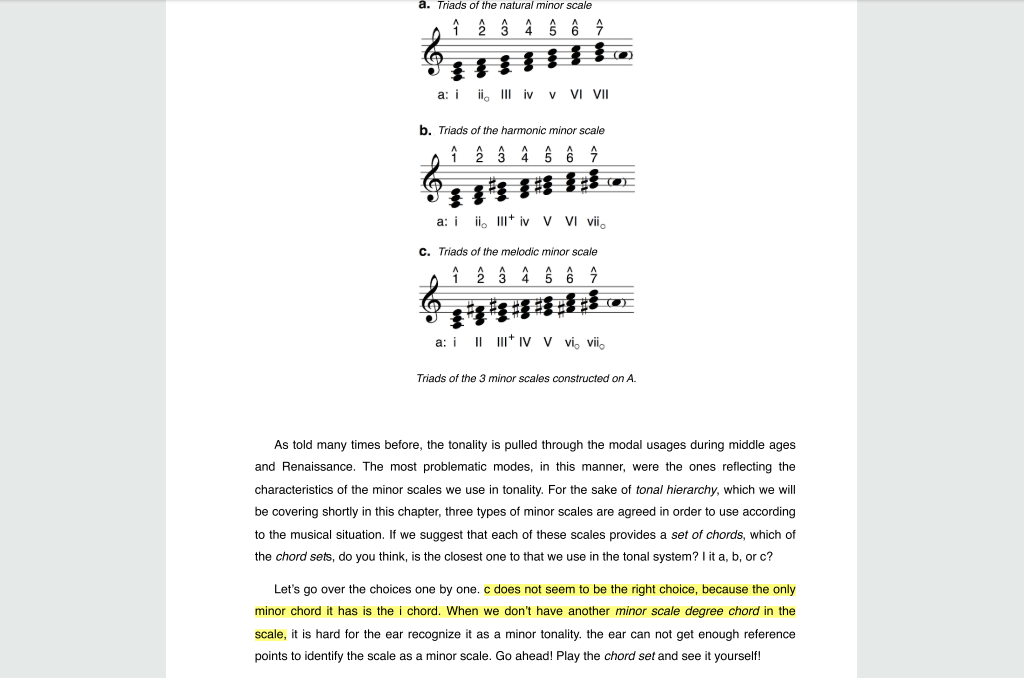 Yes, B, D, F# looks like a minor triad to me! c seems to be merely a misprint for a. If he intends to 'go over the choices one by one' he wouldn't start with the last one!

But a contains three minor triads. b and c contain two each. Let's assume he isn't simply an idiot, he must be failing to explain his meaning clearly. I get the impression English isn't his first language.

What's the source? Apart from the obvious errors, he seems to be falling into the usual trap of thinking a scale or mode is a restriction rather than a base.

Setting that smaller error aside, there are a couple of deeper issues I have with the highlighted analysis.

First, the quality of a chord depends on more than just the triad, and because the author ignores the other notes, I think he/she has mislabeled some of those chords. I'll consider A melodic minor (scale c). The modes of A melodic minor are well known: 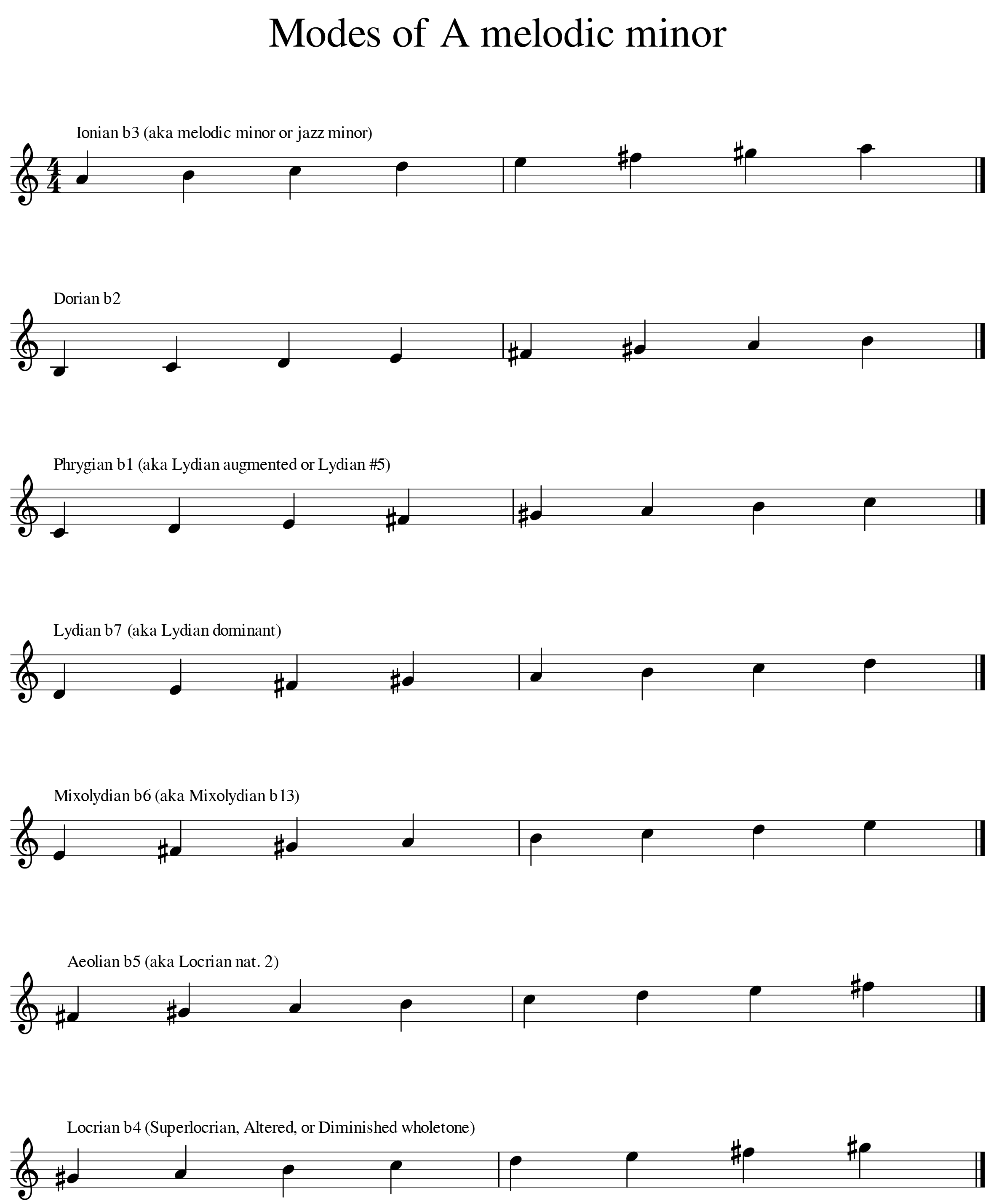 There is significant contrast between the list I've included above and the source you've included in your post. For example, I'm much more inclined to call the vi chord vi min ♭5 than vi dim. In fact, the question "How many of these modes are minor" is a bit ambiguous. Two of the modes from above contain unaltered minor triads (im∆7 and iim♭2), but if you consider Locrian to be min♭5, then there is certainly a third altered minor chord (the vi chord) and maybe even a fourth minor mode (the vii chord). This ambiguity is problematic for the source you've included, because it seems like his/her argument relies on a sharp distinction between "minor" and "not minor"--at least, the author needs these two categories to be distinct enough that he/she can simply count up how many are in each category. I don't think that sharply defined boundary exists.

Another issue I see is that the author hasn't correctly identified why a given minor scale might be harder to distinguish from a major scale, or why a different minor scale might be easier to distinguish from a major scale. The best way to do this analysis is to compare each minor scale to the major scale. This contrasts with the author's approach of comparing the minor scales to each other, which I think is much less useful. When we compare each minor scale (a, b, and c) to A major, what do we find? Scale c (A melodic minor) differs from A major by only one note: the third (C vs. C♯. This, in my opinion, is the support the author is looking for when he/she states "it is hard[er] for the ear to recognize [scale c] as a minor tonality."

Note: in the instance where a scale might have an alternative descending form, I'm referring only to the ascending form, for simplicity.

Classically speaking (my interpretation of Common Practice Period harmony), the statement isn't really correct. Keys have associated chords and scales; scales (per se) do not have chords. (I'm not familiar enough with jazz or pop theory to discuss the terminology used there. Perhaps the original question arises in those contexts.)

The minor mode has two mutable tones, 6 and 7. There are various common usages of these. Either form of the note (like A or Ab in C minor) is usually considered diatonic. About the only unusual combination in a melody is the "natural" (lowered) step 7 and the raised step 6 (like G-A-Bb-C or similar), but I it may occur. Some of the chords using the raised 7 are common: V, V7, vii0, vii07. Those using the raised 6 are less common although ii, ii7 and even IV do occur; more rarely one gets II or II7. The augmented III+ is rare but still occurs if the voice leading requires it.

The three forms of the minor scale come from arranging melodic (and harmonic) patterns in order of pitch. There are a few common usages of natural or raised steps but exceptions are common.

With tonic harmony (i chords), melodies often use the raised 6 and 7 when ascending and the natural 6 and 6 when descending. With subdominant harmony (iv chords), both the 6 and 7 are predominately used in their natural state. With dominant harmony (V or vii0 chords), the raised notes are common. The idea is the provide a half-step approach to the root (step 8 actually) both melodically and harmonically while avoiding the augmented 2nd between 6 and raised 7. The pattern 4,5,6b,7 isn't uncommon as it outlines a V9 chord. In instrumental music, usage is more diverse. Mozart and Beethoven often use the "harmonic" scale in ascending and descending passages in instrumental music.

5
How does Gdim7 fit in C# minor?
12
History of "jazz minor/melodic minor" harmony
14
Why do the notes of Melodic-Minor Scale change when you play it in descending order?
4
Is a pure minor scale the same as natural minor? Do they mean the same thing?
12
What is the historic origin of the terms & textbook definitions of the natural minor, harmonic minor, & melodic minor scales?
14
Why can't I identify major and minor chords?
2
V7 and the minor scale
3
Does melodic minor ever function as a key (or tonality) in of itself?
2
Usage of Melodic Minor instead of Harmonic Minor on Secondary Dominant
6
Is the melodic minor a key as well as a scale?