What is the purpose of a zero fret on a guitar?

Some guitars have an added fret just after the nut called a "zero fret": 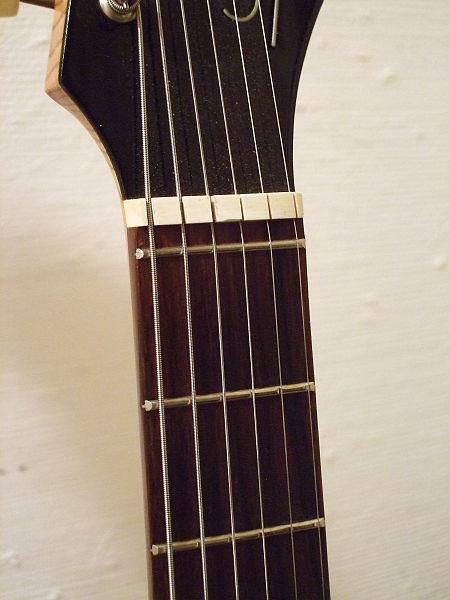 What is the purpose of this? Is it to enhance playability at the bottom range of the instrument (by making the first fret easier to bend and push down)? If it is then why don't all guitars have it?

A zero fret may also be easier/cheaper to manufacture than a traditional nut. With a traditional nut, the string slots must be cut precisely to the right depth. With a zero fret, the slots in the nut are cut deep without no need for precision. The nut is only responsible for the horizontal separation between strings; the zero fret is only responsible for the height of an unfretted string. It is presumably cheaper or easier to get the correct height with a zero fret than it is to cut nut slots to the correct depth.

Tuning may be easier with a zero fret, due to lessened friction with the nut (the nut slots can be cut wider when a zero-fret it used).

1
What would (theoretically) cause ESP LTD strats with Floyd Roses to play easier than an MIM Strat?
2
Should my fret be buzzing on my recently bought guitar?
9
Is a slight amount of fret buzz acceptable when lowering the action on a guitar
20
Why is a zero fret so uncommon on guitars in spite of all the advantages?
4
Fret markers on guitar necks
5
Question about a guitar lick involving string bending and playing a higher note while the string's bent
6
High E String Buzzing Only When Picked Open
2
Questions on Guitar Maintenance & New Gear
2
Which Fret do I Indicate on an up-the-neck chord chart that is using a capo?
2
Why is this fret buzzing on my plectrum banjo?