I've linked below to the song by Meshuggah, "Break those bones who sinews gave it motion".

What is the rhythmic technique/grouping that the drums and distorted guitar are using from 0:29 to 1:01 of this song? The meter is 4/4, and this meter is established by the intro guitar riff from 0:00 to 0:28. But at 0:29, the drums and second guitar begin playing a figure that doesn't seem like it's in 4/4 time. This would suggest that the figure is some sort of polymeter, but it doesn't seem to ever sync back up with the 4/4 time. If it's not a polymeter, then what is the rhythmic nature of this figure occurring from 0:29 to 1:01?

You're right that this is a polymeter-like figure, but there are some important deviations from traditional polymeters. I'll try to explain the ways it deviates from typical polymeters and some of the effects this has. In particular, the polymeter-like figure in Meshuggah's song is made more complex by three factors: (1) it is played on the drums (among other instruments), (2) the eighth note groupings are highly complex, (3) the polymeter repeats over a 6-bar phrase.

In addition to this first feature (i.e., the way the polymeter is distributed across the instrumentation), there's a second really crucial feature: instead of a simple 3-3-2 eighth-note pattern that fits within a single bar of 4/4 time, this song is based on a 3-3-5 eighth-note pattern which necessarily spills over the barline and restarts on different beats. The best way to show this is by highlighting the groupings in a transcription. I've emphasized the 3-3-5 groupings with the colored brackets. The top staff shows the guitar line, and the bottom staff is just a simpler rhythmic representation, which shows the first beat of each 3-3-5 grouping. Each time the 3-3-5 pattern repeats, the color of the bracket changes. This is hopefully a useful way to visualize the pattern spilling over and starting in different places of the 4/4 measures. 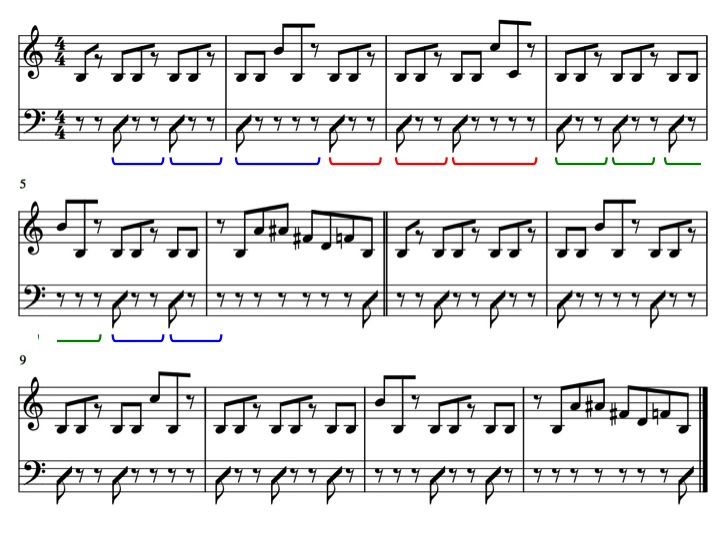 (Please pardon the non-standard way I've grouped eighth notes--I've tried to draw the beams so that they connect the groups of 3 and 5.)

So far I've described features 1 and 2, which complicate the rhythmic structure of this polymeter-like figure. As if that weren't enough, there's a third thing to point out. The polymeter repeats over a 6-bar phrase, which has two important consequences. The first consequence of the 6-bar phrase is that the 3-3-5 polymeter isn't perfectly continuous. Typical polymeters simply repeat perpetually without any interruption or break in the core pattern/structure. But during the fourth repetition of this polymeter (half way through bar 5, where the 3-3-5 group starts for the fourth time), there is an interruption after the initial 3-3 grouping. Maybe this fourth and final iteration of the pattern could be called a 3-3-6-3 grouping, where the '6' represents the first 6 notes of the bar 6 lick. If we use this description, the full 6-bar polymeter-like phrase would be:

The second consequence of the 6-bar phrase is that the polymeter does not repeat in sycn with the 4/4 guitar. The polymeter repeats for the first time after bar 6, when the 4/4 guitar is exactly halfway through his 4-bar riff. This places the polymeter squarely in contrast with the normal Western tradition of using 4-bar phrases, 8-bar phrases, 12-bar phrases, etc. when composing in 4/4 time. I've put a double bar after measure six where you'll see the whole 6-bar phrase repeat a second time. So whereas most simple polymeters sync back up with the rest of the band over relatively short periods of time, it takes 12 measures for the intro guitar's 4/4 lick and the 6-bar polymeter to line back up and begin together.

So I think it's fair to say that there is a 6-bar phrase that uses a 3-3-5 polymeter, but the 6-bar phrase probably can't be called a polymeter outright. There are some interesting rhythmic techniques worth studying in this piece!