In the Kool & The Gang song "Fresh", there's an unusual yet intriguing chord at 2:11 in the song -- this particular chord has had me stumped trying to identify it ever since the song's release in late 1984.

I've used a computer program that does Fourier Transform analysis to identify the predominant sound frequencies of that chord, and what best describes that chord (it starts between the lyrics "I'll do whatever..." and "...to make you mine, baby") is:

Best I can tell, this is a V7 chord with an added iii and vii (in B Aeolian [minor] mode). Note the presence of an both an A and A♯.

What is this chord?

This chord you're hearing is F♯7(♯9♭13). You've got the right notes, but in the recording, the chord is being voiced something like this: 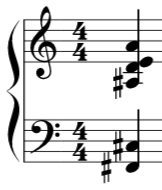 These notes and this voicing are confirmed by a spectrum analysis:

When identifying a chord, a crucial feature to listen for is the note being played by the bass. In this case, the base is playing an F♯, which usually suggests an F♯ chord (as opposed to a Dmaj♭13 chord).

In fact, this chord is so common (at least, in jazz) that this particular voicing has a name: the treble clef part shown above is a "type A" rootless voicing for F♯7(♯9♭13). The type A rootless voicing is a fancy name for something Bill Evans popularized. It's simply a chord that is constructed using these scale tones: 3-5-7-9. We can use this exact same construction for minor chords, major chords, and dominant seventh chords. When applied to dominant seventh chords, though, the usual convention is to replace the 5th with the 13th, making the construction: 3-13-7-9. So starting with plain old F♯7, the type A rootless voicing would be:

And finally, flatting the 13th (changing D♯ to D♮), we get:

which is the right-hand voicing from the first image above.

It's, of course, difficult to analyze a chord out of context because often the difficult notes to categorize end up being easier to explain away as non-harmonic tones, such as suspensions and passing tones.

Having said that, to me D natural seems like the root of this chord. If you spell it:

You have a D major 9th chord with a flat 13. This is a little unusual, but you'll find it in jazz harmonies. The A#/Bb sounds to me like a non-harmonic tone that wants to resolve to A, making this a pretty run-of-the-mill major nine chord.

Not the answer you're looking for? Browse other questions tagged chords chord-theory analysis or ask your own question.