What mode to use over this progression?

I am currently starting to understand the theory behind music and I'm trying to figure out the best approach to playing modes over chord progressions. I have to play a song where the bridge progression is A2, F#m11, E2 and then D.(That just repeats for a few measures.) What should be my process to break this down in the most efficient way? Only thing I've every done is play based off the key of the particular song. I want to break that mold and start looking at things in a different angle. I appreciate all your help!

For songs where all of the chords have a standard "diatonic" function and fit within the tonic, the process is pretty straightforward:

For reference, here are the different modes and the chords that work with each mode: 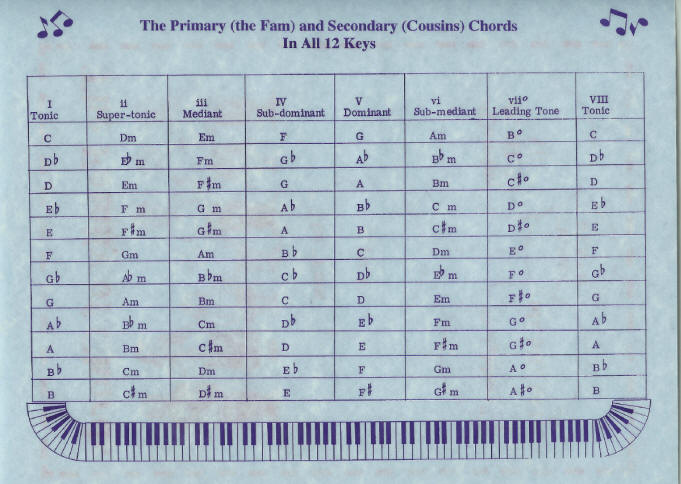 For example, the top row (going across) shows the scale degrees for a tonic/tonal center of C major. Your progression (A2-F♯min-E2-D) sounds like it has A major as its tonic. So we can look to the third-from-bottom row with A in the first column.

The other chords from your progression are all part of the standard family of chords, and they all have standard diatonic functions:

So your progression (A2-F♯min-E2-D) is a I-vi-V-IV progression. We're not thrown off by the 2 in A2 or E2--we know that those are still major chords and thus fit in the standard family of chords.

Now that we've finished steps 1 and 2, we can move on to step 3 and recall/look up the mode associated with each scale degree:

So the modes we can use are:

For more complex cases, the chords may not fit within the standard diatonic harmony/family of chords. In those cases, there will usually be several decent choices available to you for each chord. Here are some of the factors you can look at when deciding which mode to use:

Criteria 1 and 2 both focus on shared tones. Shared tones are tones that are present in two different places. As an example of 1, let's imagine a progression in the tonal center of A major, and one of the chords that appears in the progression is B♭ Maj. We could use B♭ Ionian (which contains an E♭) or B♭ Mixolydian (which contains an E♮). Choosing the Mixolydian will increase the number of shared tones between the B♭ scale and the tonic, because the E♮ will be an extra shared tone.

Jdjazz has summed it up really well, and makes modes understandable. What you have to bear in mind, though, looking at it from a different perspective, is that each and every one of those modes - A Ionian, F# Aeolian,D Lydian and E Mixolydian - contain exactly the same set of notes as each other. You're not going to be using a different set for even one of those chords,all from the A major family.

You may consider using the tonic note from each mode as a base for your melody line, but while that is bound to work, and always sounds good, you won't want to start each new bar on the tonic for the mode for that bar.

So, hopefully to simplify things, all of the bars can use all of the notes from the key of the piece - A major. In order to keep things on track, though, the emphasised beats in each bar (normally 1 and 3 in 4/4) need referencing to 1,3 or 5 of the relevant chord. For instance, on the E2 bar, start that part of the melody on E, G# or B, and it kind of keeps the structure in shape - and as a bonus, the 1,3 and 5 of E Mixolydian are E, G# and B! As an extra bonus, all three are also part of the A major scale, where all this lives!

To provide a more simple answer, I would suggest this approach.

Look at your base chords (without additional tensions)...

This is actually just a simple progression in the key of A major...ergo, playing the A major scale over it will work and sound good (A Ionian). You can look to target chord tones in your playing as well. With the additional tensions, this is your chord progression (as provided)...

Not the answer you're looking for? Browse other questions tagged theory electric-guitar scales modes or ask your own question.

13
Is it acceptable to change tempo in the middle of a song or is this a bad idea?
1
Is there a constant relation between a song notes and its chords progression?
7
How would you go about writing a a chord progression properly using the circle of fifths in the phrygian mode?
4
Available Tensions for Modal Scale Degrees
3
Is the melodic minor scale use as the basis of chord progressions in modern jazz?
3
Rationalizing this chord progression (I7-iii-IV)
18
What are modes in the real world?
5
Why is it a convention to number modes by their tonic scale degree relative to ionian (major)?
1
Understanding method of applying modes on chords