What are all those extra controls on the Fender Jazzmaster?

The wikipedia article says a lot, but doesn't dissect the artifact.

This image from guitar-mod.com should help: 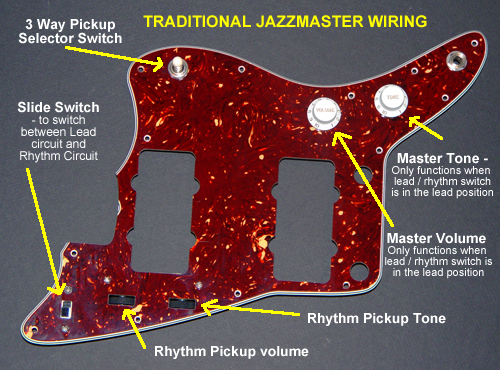 If you can visually flip it around in your head to match the pickguard picture, you can see that the rhythm pickup's volume and tone controls are thumbwheel-type roller pots.

In the Fender Jazzmaster, essentially there are two different tone control circuits, the "Lead circuit" and the "Rhythm circuit", designed to have different tonal characteristics. You can switch between the two, independent of the selection of pickups.

This was Fender's design, and it proved not to be very popular, but it is retained on new guitars that are patterned after the original model.

Gibson had a related system, called the Varitone, which was a six-position rotary knob that engaged different arrangements of capacitors into the tone circuit to create different "notches" in the frequency response, independent of the conventional tone and volume controls. The Varitone was found on some high-end ES-335-family instruments starting in 1958. It is still available on some "custom shop" models of Gibson and Epiphone guitars today, notably the B. B. King "Lucille" model.

This is nothing I know myself, but here's what I could find:

Not the answer you're looking for? Browse other questions tagged guitar electronics or ask your own question.

9
What are Tone Pots / Potentiometers?
15
What changes in the amp when I adjust its presence?
11
Is anyone able to outline the purpose of these controls?
3
Transposing notes from piano notation to play on guitar
3
Concerning individual string picking - when (it what situations) should the pick be angled, and when should it be perpendicular to the string?
15
What are power chords?
2
Confusion about C Major Chord on guitar
10
What makes a B-D-D-D-D-D tuning useful? Doesn't it make it more difficult to play?
17
What is an All-Pass Filter? What are its uses?