Music Notation: "Wave" below a note

Here's a link to the edition I'm talking about, and below is a screenshot of bar 14. I would post the other examples too, but this weird reputation system is not letting me. 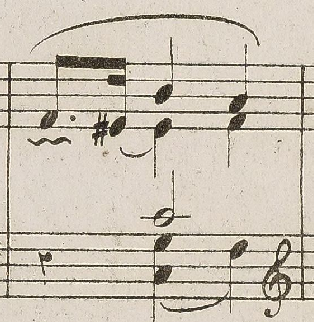 I figured for myself that it is neither a trill or a mordent, since that usually would be above said note (that would be, in that case, a rest), but any help and/or correction is appreciated!

They are mordents. Here's a different edition:

Your edition was published in France. French music engraving in the 17th and 18th centuries used "wiggly curvy" symbols drawn close to the note heads for ornaments rather than the "pointy" German style which is now "standard". See editions of Couperin etc for many examples.

I suppose this publisher was still using his old hand-engraving punches for these symbols in the 19th century. He also used "old style" double-sharp symbols, with four dots in between the arms of the "X" symbol.

This is a couple of bars from the OP's edition:

The misprint of the tempo indication "Presto" for "Mesto" (which somebody corrected by hand to "Lento" which is at least closer to what was intended) right at the start of the collection doesn't inspire much confidence in the edition!

Not the answer you're looking for? Browse other questions tagged notation sheet-music articulation chopin or ask your own question.

11
Soft note marking
12
Meaning of dots below note heads
10
Most complex "block" of sheet music notation
7
What do these triangles above and below the staff mean?
5
Two dots below a note in the Bass Clef
9
8 below note played as octave or singular note?
8
Music notation question - note between staves
4
Music notation: Left side dot