What are the benefits of guitars with fanned frets?

I've seen fanned frets on some extended-ranged classical and electric guitars. What are the benefits of guitars with fanned frets? Are there any drawbacks? 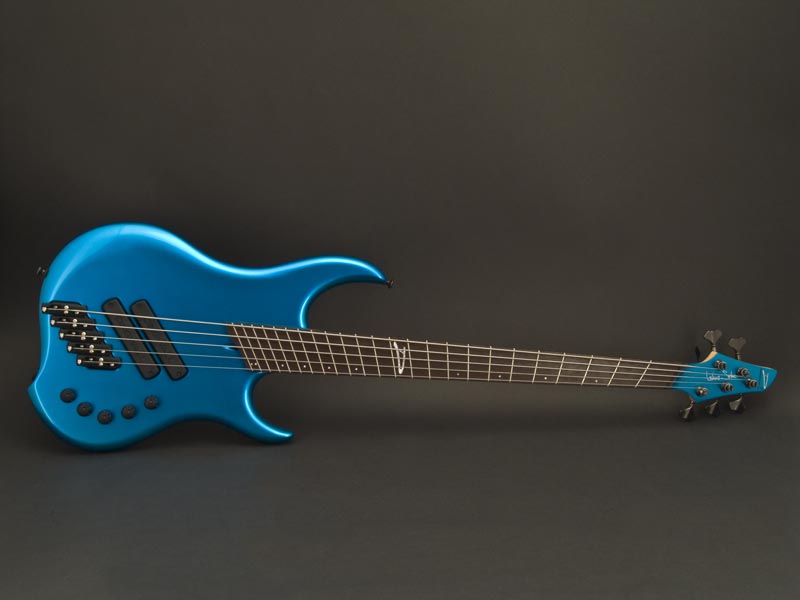 The idea of fanned frets is, in essence, to combine the baritone or bass guitar with the regular guitar in one instrument. Fanned frets enable strengthening the tone of the lower strings by giving them a longer speaking string length. They can also enable a high string that can be tuned higher than is possible on a conventional guitar by giving it a shorter vibrating length, enabling a higher-tuned string that won't break under the tension.

In the modern era the technique was first used on an 8-string guitar designed by classical guitarist Paul Galbraith and built by luthier David Rubio. Galbraith wanted an instrument where he could play notes one 5th lower than on a standard 6-string, and one 4th higher as well, adding a full extra octave to the instrument. He called his design the "Brahms guitar" because he found he could play convincing arrangements of Brahms solo piano repertoire on his instrument. He then built up his own repertoire of arrangements where he plays solo classical guitar with lower bass parts and a fuller sound.

Next up came Charlie Hunter, who worked with luthier Ralph Novak to create an 8-string electric guitar that has the range of the regular 6-string but also adds a full octave lower. (This design has a longer scale length enabling the extra bass range, but doesn't enable any higher notes). Charlie Hunter plays in a style where he covers the range of both the bass guitar and the electric guitar all by himself (Ralph Novak's slogan is "Fire you bass player"). Hunter usually performs with just himself and a drummer.

Now progressive heavy metal and djent guitarists are getting into the game. Strandberg Guitarworks makes a Misha Mansoor model.

Here are some luthiers that build 8-string fanned-fret classical guitars.

Here are some luthiers that build 8-string fanned-fret jazz guitars.

Six-string guitars and bass guitars that use fanned frets

The technique of fanned frets has also been applied to the conventional 6-string guitar and the conventional 4, 5 and 6-string bass guitar. The theory here is that the lowest strings and the lowest notes make a stronger, fuller sound by giving them extra vibrating length, and the upper strings get a brighter, clearer sound by giving them a shorter vibrating length.

As luthier Chris Larkin explains for this 9 string bass monster - To get suitable tension on the huge variation of string sizes it required different scale lengths for each string and so needed fan frets.

I managed to find a 7-string fanned fret guitar I really liked (The Ormsby HypeGTR), so I thought I'd buy it and experiment to see exactly what the benefits are.

The question of: "What are the benefits of guitars with fanned frets?" is a good question. The correct answer depends on what your intentions are. If all you ever want to do is strum chords to back up your singing voice or play along with others, then you'll do just fine on your standard six string guitar.

However, if your ambitions run far beyond playing backup with other instruments to soloing on one guitar, then you've got a world of trouble. It's been said the guitar is an easy instrument to play, but a difficult instrument to play well. And so it is. Why is that? It's because great music is the range of the Grand Staff and then some. That's the nature of the beast. So there are only three options! Either 1) start or join a band or an orchestra, 2) increase the string count, or 3) possibly do many additional practice sessions trying to do what the human hands were never designed to do.

There are three things that can trouble great guitar playing: 1) String count. 2) String length. And 3) Choice of tuning. If you can bring all three of these parameters together in the correct order, you can make many many technical problems go away.

How many strings should the guitar have? Ten strings seems to work well when tuning in 4ths, which is what medium sized guitars are usually tuned to. I tune my fan fretted ten string classical in fourths with my third right in the middle between my 5th and 6th string. This allows me to preserve six string chord shapes. In fact it opens up another useful chord shape not found on six stringers.

I play five wound bass strings and five unwound treble strings. This configuration works really well and allows me to chase music I wouldn't otherwise go after. In fact: There's very little music I can't chase after. I like to call my guitar a Grand Staff guitar because it makes sense to write music for it using the Grand Staff as opposed to how it's usually done.

It may surprise some people I play a fan fretted ten stringer, and as far as I know it's the only one so far in existence. What surprises me is no one ever thought of it before. In any case I have played six, seven, and an eight stringers before I got the ten stringer. So I know a few things about string count, string length and choice of tunings. This works and it works very well.

Any specific questions to playing a fan fretted ten stringer, I'll be happy to answer.

The second most obvious difference (advantage?) is that fanned frets accommodate the human construct better (than parallel frets). If one simply moves the left hand away from the body, the elbow being the pivot point, the hand naturally tilts or fans away from the body. As the hand moves to the right, the angle of the hand the moves (pivots) in the other (towards the body). Fanned frets accommodate the natural ergonomics of the player's hand, angle causing less stress on the fretting hand as it contorts less. Of this I have no doubt as I have "A-B (d)" the two side by side.

Two things: one, this is nothing new. The orpharion- a kind of lute with metal strings in the Renaissance- had fanned frets.

The other thing: yes, the idea is to get longer bass strings (or shorter treble strings). But if you look at the difference in length fanned frets give you, it's not much at all- barely a semitone if even that. Thus, I suspect that fanned frets are more about appearance than actual acoustical advantage, which is negligible.

Not the answer you're looking for? Browse other questions tagged electric-guitar classical-guitar fretboard or ask your own question.

3
How does a bass with tilted frets work?
39
How does scale length affect my playing?