Is it possible to play a piano piece written for four hands with just two hands?

I was wondering if it is possible to play a four-hands piano piece with just two hands. Were any classical musicians capable of doing that?

Longer answer: A piece for piano four hands generally has movement of notes in opposing directions that can "tie up" a single player's fingers, and/or spans of notes that two hands generally cannot cover. Depending on the piece, it is possible for a single player to improvise something similar, but they probably won't hit every note on the page and so the harmonies and movements won't be as "deep" as with two players.

There is a famous story about the blind jazz piano player Art Tatum. When he was a child, circa 1920, he heard a piano piece from a player piano roll. It was recorded by two pianists playing four hands on the piano. However, Tatum did not know that it was a four-hand piece, and had no sheet music (which he could not see anyway) so he learned it by ear and played it by himself, with two hands. This is recounted in the Jazz documentary television series by director Ken Burns.

However, in a quote from a published book mentioned in the Wikipedia article on Art Tatum, it's said that Tatum himself denied that this story was true.

A supplement to KeithS's answer...

Sufficiently simple duets written for "one piano, four hands" can be played "as is" by one person. Here's a brief excerpt from a student/teacher duet from "Keyboard Musician for the Adult Beginner" by Frances Clark ("Texas Sky", page 43). 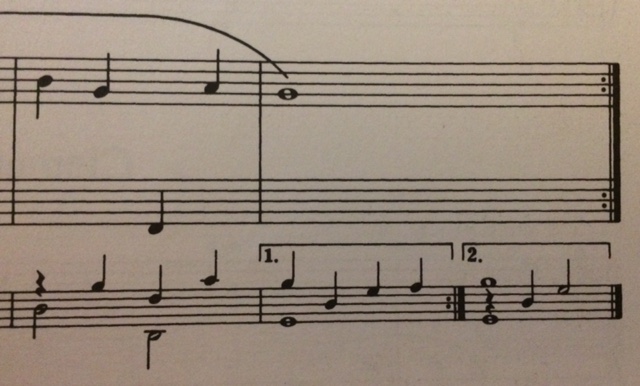 Both parts are clearly notated for two hands, but each part can be played with one hand, provided the player's left hand can span a tenth.

In this case, the Primo part (upper image) is in octaves, so can be played with the right hand alone. The Secondo part (lower image) is a fairly standard left-hand part, but written out for two hands.

So, as KeithS wrote, yes, it's possible to play a four-hand piece with two hands. But...

In a duet with any substance, there will be problems that amount to a hand-span that isn't manageable, either because the interval is too wide, or because too many fingers are required. In this case, the performer has to adapt, choosing to play the most important parts and dropping others.

Some composers created both solo and duet versions of their pieces. Brahms's Hungarian Dances, for example.

Piano pieces for two players have a tendency to create some typical problems when it comes to adaptations for us average ten-finger Joes:

Since 4-handed piano music (hereby "4s") involves more hands, it is written with a nearly infinite handspan in mind. In a 4, there is no reason why the notes A0, E3, G4, and C7 cannot be sounded together to create an Am7 voicing. This kind of voicing is not typical, but similar issues with intervals being far too wide to reasonably play arise for the same reason: your hands cannot be in more than one place at the same time. There are workarounds to this, though; quick arpeggiation of troublesome chords that cannot otherwise be sounded (like violins tackling chords), or even more creative ideas like using one's nose to hold down a key while the hands fill in other parts, or triggering notes with one's feet using something like MIDI pedals? If you're willing to get into and beyond extended technique, some elements could be solved, but you're unlikely to find a complete solution in those kinds of ideas.

- (Too many) Independent voices

Another issue is that 4s often feature more independent lines than is common in 2s. For example, the two pianists could each focus on playing a melody in the right hand and accompany in the left without breaking a sweat, but our poor lone pianist struggles to play both melodies simultaneously while also keeping up a doubly-difficult accompaniment pattern in his left. And if our lone pianist could effectively take on four hands, imagine a piece written for two such skilled lone pianists, and now someone theoretically would have to tackle somewhere around 8 hands worth of piano... My point is, independent lines are more difficult in larger numbers, so a single pianist would have trouble keeping up with many different melodies and countermelodies at once.

- Too many notes, Sire

A simple problem, but a logical one. Four hands have 20 fingers, and though a typical 2 wouldn't use all 10 fingers at once, expect a 4 to use more fingers simultaneously than the average pianist is used to using. And it goes without saying that if that number ends up being more than 10 fingers, you are in for a world of pain.

Those who write 4s often do so with the explicit intention of making them impossible for a single pianist, much like Black MIDI artists who would never write a playable score for a human. This means that even if the arrangement can be executed at an arbitrarily slow pace, getting an arrangement up to speed is often rendered extra-impossible by a devilishly brisk tempo. Speaking of tempo,

Arrangers of 4s have no issue with making their pieces technically difficult for both musicians, and as such often set the tempo extremely quick. And jumping between voices at high tempos would require lightning-fast and completely precise finger/hand movements. Good news: there's a maxim that says

, and luckily this is one of its very few useful applications. If you could somehow play the piece correctly, even as slow as one beat per minute, then in theory you could get it up to speed. The big drawback here is that getting it up to speed would take an extremely long time spent practicing the piece; think decades of one's life devoted to the piece as a ballpark guess.

I mean, with a piece this difficult, the most effective way of practicing it seems to be just ignoring the piece entirely for many years, instead working on one's craft the natural way until one finally gets to a level of piano skill where the arrangement is much, much closer to being playable for them. Either that, or you would have to entirely reinvent your understanding of how to play and practice the piano for this piece somehow. There's also a non-trivial probability of you simply not living long enough to realize your goal if you're on what would normally be a reasonable practice schedule, I think.

Beginner pianists already have a tough time playing with both hands simultaneously. The difference between two hands doing complex tasks and two hands doing four complex tasks is immense because you only have one brain, and the human brain can only focus on so many things at a time. I suppose it would be possible to train oneself to be able to do two or three of the "hands" as kind of a background task with enough repetition for muscle memory, but that also factors into the long, long practice hours. And most of those hours would be completely demoralizing, with little to no progress being made at the end of hours and hours of time at the keyboard.

At the end of this, what have we accomplished?

There would definitely be something to be said for the absolute euphoria of being the first person ever to accomplish anything like this. You would also most certainly be far, far beyond your skill level at (regular piano) playing than you were when you started. And having the knowledge and experience of having tackled a 4-handed arrangement once, you'd be the most qualified person on the planet to learn a second song in that style, and you might be able to do it much, much faster than it took to learn the first one. You might even inspire a generation of pianists to challenge themselves to learn your new approach to piano.

There are obviously a lot of drawbacks. The biggest concern is that you have a high risk of failure. It's not unreasonable to believe that you might develop arthritis before completing your training, or go blind, or lose a hand in a woodshop accident. Or just completely lose interest in music forever. Additionally, there's the very real possibility that upon completion, no one but you would care about it. Musicians might be very impressed, but no layman will ever understand what you went through to learn that piece. You might have your own niche community of fanatics who really do recognize your talent, but outside of that?

The waiter at your favourite restaurant likely isn't going to recognize you and bring you extra breadsticks. People will not name their babies after you. You won't be approached by strangers when you're out taking a stroll (actually, that one sounds pretty good).

Also, the value of your time is immeasurable. You could do many things instead. Getting a job comes to mind, having fun with friends, being a responsible parent or pet owner if you have a little gremlin or two, there are so many things that you would never experience in life if you chose to doggedly pursue this Herculean piano piece. There are other time-consuming things you could do that would be easier and much more worthwhile than doing this:

But hey, if you ignore everything I just said and end up succeeding against all odds, give me a call. Hell, I'll even give you free breadsticks at my restaurant.

16
Well-known composers or piano pieces generally suitable for someone with small hands?
37
How does your brain learn to play the piano two-handed?
40
Hands-separate piano practice doesn't seem to help with hands-together playing
8
Piano for small hands (disabled)
14
Piano scales: Why bother with hands together?
5
Does a four hands piece sound different if played on 2 different pianos?
16
Piano can play hands together but not separately. Why?