How to chose chords on Plectrum Banjo

I'm new on harmonic music world because I play a melodic instrument. Now, I have as a second instrument a Plectrum Banjo (standard tunning CGBD) and I would like to play with friends some Jazz songs. Just for fun.

I have started with 'It had to be you' and I get chords from Real Book. I notice I should do inversions for chords because anatomic reasons. And I would like to know what is the most important criteria to chose each chord. For example, I try to chose next chord moving as less fingers as possible or at least a chord in closed freds. Also I try to don't use open strings because I don't really like the song on open string I don't know why. Let me show notes I have tried for this song. 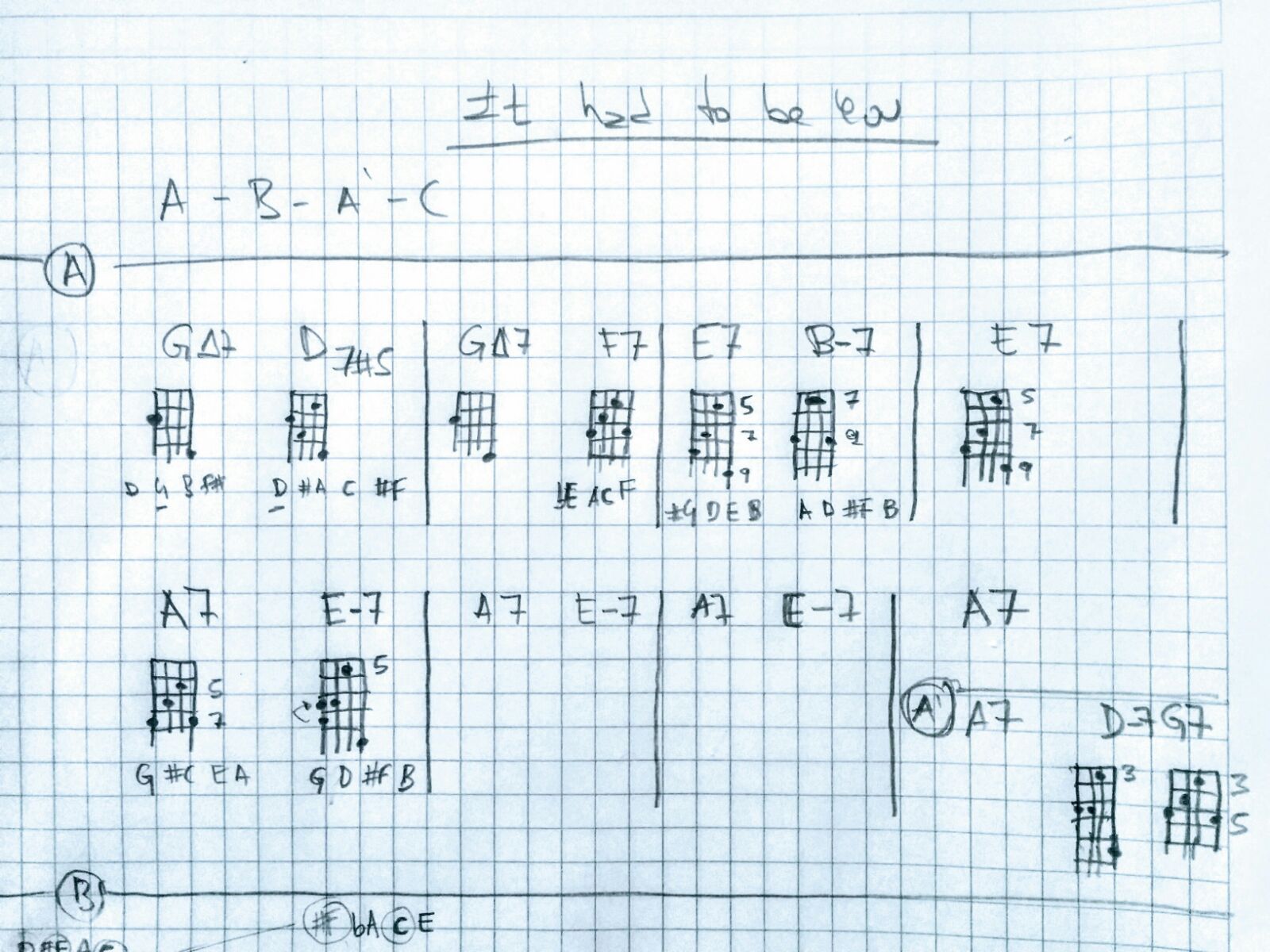 Ok, my question. Is this the best way to play this song? I'm wrong with my criteria?

If someone want to do a little chat or be in touch with me to share concepts, practice or mentor me it would be wonderful.

I haven't played a banjo before, but I hope that some guitar knowledge may transfer.

Choosing chords comes down to which chord comes before, and which chord comes after. At a beginner level, it's likely that you only know one or two forms for a chord, so this decision is easy to make. At higher levels you can play inversions in very strange paces on the neck, allowing for more variation. This will let you find chord sequences with no massive jumps, and the hand moves small amounts up or down the neck between chords.

At a beginner level, changing between chords is slow and painful. Placing each finger individually and looking directly at your hand while doing this will slow down every chord change. With practice and practice alone you will learn to change chords without even looking at your left hand. This will drastically reduce changeover time, making it possible to change between completely unrelated chords quickly in open positions.

I won't go into bar chords here, since they do not appear in the question.

Regarding the song in the example

Most of your chord choices are fine. Your G7 can be played with fingers 2 and 4 so that they don't need to move when you press down 1 and 3 to play the D7. You then lift them up again for G7. Changing to F7 is a simpple matter of moving 2 across a string, and sliding 4 down a fret. The other fingers simply press down where they are needed.

There is now a massive jump on the neck, moving up 4 frets. Lucky for you, the next chord actually uses all four fingers on the same strings, so its a simple "slide up and readjust" chord change which won't interrupt your playing once you get used to it.

Going to the B7 and back to the E7 could cause a hiccup if done incorrectly. YOu could simply slide the fingers up again, and move the fingers to the correct frets on the same strings. This results in the first finger being behind the second on the same fret however, which is not optimal. I would suggest to lay the first flat over the middle two strings for the B7, and then do the change in reserve on the way back down to the E7.

The rest of the song just rocks back and forth between A7 and E7, and both chords are on the same fret. It's a simple matter of sliding 2, 3, and 4 up and down the frets to the right places and keeping your index finger in place.

All of these changes are perfectly acceptable and don't need to be changed from what I can see.My only advice is to play through slowly, concentrating on the chord changes, not the chords themselves.

Not the answer you're looking for? Browse other questions tagged chords banjo or ask your own question.

15
What to play instead of chords with an informal group?
2
How to play barre chords high up on the neck
0
Changing a song's key vs. changing chord voicings
2
How do I manage internalizing foundation for chords, scales, hamonies and voicing
2
Learning to master keys by using association with music
1
Can I use a tenor banjo bridge on a plectrum banjo?
1
How does one transpose the guitar accompaniment for "Aura Lea" without making it sound like crap?
4
Why do some composers/songwriters choose inverted chords over root position chords?
2
Why is this fret buzzing on my plectrum banjo?