What inverted chord is this?

What chord is this? I thought maybe E(add2)/B? 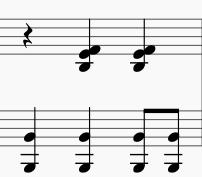 The top line is treble and the bottom is bass

With so many Bs in the spelling, I would be inclined to call this chord a Bsus4, but it may also be an inversion of an Esus2, where the minor 3rd of the ii chord (G of Em) has been replaced by the 2nd (F♯).

(I assume there is no key signature.)

First of all, we can safely assume that the root note is B, since it is played in three different octaves. The other notes are E and F.

There is, of course, another less likely possibility

In second inversion, this has the correct notes to be a suspended second chord on E (B E G F), however the G is missing.

This is actually in the key of D major / B minor: 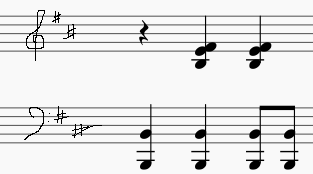 The notes of this chord are B, E, and F#. This is a B minor chord with a suspension on the fourth (some might call it Bsus4).

2
Is this chord a Maj6 (no 5) or inverted minor triad?
2
What Is Piano Music With Two 'Great Staves'?
14
What does this double-treble double-bass staff mean?
1
How to play these notes?
4
How do I read this piano sheet music?
3
How to play this rhythm?
3
Chord progression versions and categories