How much of a jazz composition is defined by the composer, and how much by the musicians?

Do jazz music composers need to write all notes for the every instrument, do the players write themselves a new suitable extravaganza or do they completely improvise the song?

In jazz there are many topologies for improvising or playing together.

by solo performance we understand: - a single individual with the main orchestration role

by chamber music we understand: - a set of small individuals (usually 2 up to 7-9 people playing together)

by small ensemble we understand: - a medium size set of individuals playing music together - usually 7 up to 24-32 people

by large ensemble we understand: - a set of 24 up to 80-120 musicians playing together

one thing that I’d actually like to make clear, is that these categories can fall into one another. that being said, you can have a chamber music/combo with a soloist. or a large ensemble, with sets of small chamber music/combos, as soloist, and then lead soloists, and believe, you can have very intricate and complex forms of musical orchestration

regarding notation and interaction, you can have a combination of some of those:

regarding notation and interaction

in terms of music content, although not necessarily following the same form of strict rules. and example of that my be rooted, into the late music of john coltrane, or later on evan parker

by structured based improvisation, we mean: - improvising with a structure

by graphical notation we mean: - the act of improvising with scores, that use self determined symbols to guide the performance. the symbols can consist of basic shapes like squares and triangles, but also more intricate and complex shapes, like hermetic, and cabalistic symbols, stuff pointing to chaos magick, or even more extreme forms of content, not necessarily, but also mystical

by indeterministic rules we mean: - rules that define the way as the material will be generated, not necessarily determining the content of the performance, but giving cues, to generation of material

an example of that may lie within john cage 4’33’’, but also steve reich pendulum music, and also, in the same fashion, john zorn cobra conducted improvisation system, which in my standing point, is one of the most difficult pieces to play within conducted free improvisation

by partially notated improvisation, we mean: - a score where not every single aspect of music is specified

and example of that may be a standard, or a graphic score

by fully notated improvisation, we mean: - a score where every single aspect of music is specified

a typical, but not always the case example where that may happen may lie within big band scores

by conducted improvisation we refer to: - performances where we have a conductor guiding the development of music

that can range from a fully notated score, where the conductor and the musicians know everything that they are going to play in advance, to a performance as the above mentioned cobra pieces of zorn or even conrnelius cardew the great learning

again these categories may fall into one another

As so often, the answer is 'it depends'. Basie, Ellington etc. would fully score most of the piece, then there would be a section where selected players improvised a solo. In bebop and its derivatives all that would be written down is the melody and the chord sequence. And there are many gradations in-between!

Here's what's written down for a Basie number.

Here's what's written down for 'Giant Steps'. Maybe Coltrane's band at the infamous original recording session didn't even get that much! Research the story, it's interesting. 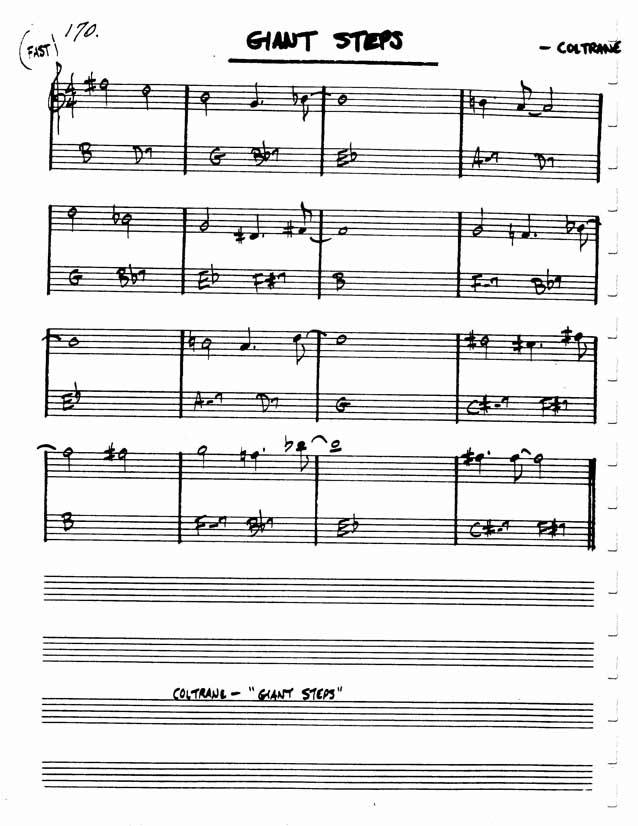 All stops from one extreme to the other. Sometimes just a leadsheet ( chord chart and basic dots) to full blown orchestration, particularly when there are a lot of musos involved, who may well get in each others' ways otherwise.

Improv. happens usually after the main theme has been stated - otherwise no-one's going to have a clue what it's all about! Unless it's free jazz, where anything and everything is permissible, but to a lot of listeners this is so random there is no shape, and it's hard going to listen to for some...

For some jazz standards - Summertime for one - there are many different chord sequences available, so it might be that a solo player (pno) could completely take it apart and put it back together in the course of playing it.

Some songs are so complex that they need written scripts to be played by more than 3 or 4 players, others will lend themselves to nothing, as they are well known standards, where everyone has the opportunity to blow their own verse or two, or even share - trade fours, etc.

So, unless you narrow the question down to a particular sort of jazz, any answer will reflect what is said here. Yes and no. All and next to nothing.

Not the answer you're looking for? Browse other questions tagged composition jazz or ask your own question.

10
Do all jazz musicians [in a band] need to know a song's melody?
3
start with lyrics or harmony?
9
Do people who don't study modes improvise the same as those who do?
4
Why and how to play chord progression?
1
How do jazz musicians pick chords and scales?
2
What are the rules of Third Stream composition?
4
Do jazz musicians improvise on the parent scale in addition to the chord-scales?
2
Film composition and tempo/cue matching
16
How much of a jazz tune should I pre-arrange?