What does "fouettez en tirant" mean?

I'm new here but I cannot find anywhere on the internet what this musical term means; "fouettez en tirant". It appears in Viotti's Concerto in A Minor No.22 in the third movement; Agitato Assai.

I tried using Google Translate but I ended up with "whisk pulling" which makes no sense.

Here is an image of the term being used on the music sheet: 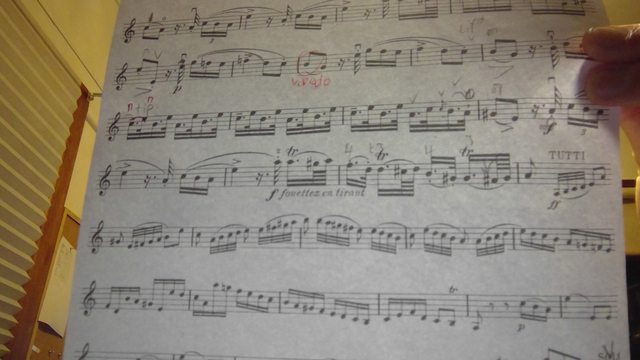 Fouetté it's a fairly standard (advanced) bowing term. It is pretty much the same an accented detaché but on the string (unlike an accented sautillé).

It is also called a "whipped stroke," by analogy with the classical ballet movement with the same name.

It is mostly used on up-bows, so presumably the "en tirant" is asking for it on a down bow. That would make sense from your image - the fouetté only applies to the dotted 32nd note before each trill, and by implication the trills themselves, on the off-beats, are meant to be up-bows.

There don't seem to be any YouTube videos, at least with English commentary. I found one in Spanish, but I don't speak that language.

Taking a peek at the online Dolmetsch dictionary (everyone should bookmark this),

I see a listing for

tiré (French m.) drawn, pulled - referring to the down-bow on the violin

So, along with Google's "Whip pulling" pseudotranslation, I would suspect a down-bow either extremely fast, so as to lose "grab" on the string, or possibly a down-bow ricochet.

It's certainly an obscure marking, and perhaps some native French speaker can comment on the idiomatic meaning.

Not the answer you're looking for? Browse other questions tagged sheet-music terminology or ask your own question.

24
What exactly does "feat." mean?
3
Is there a formal name for this type of composition?
5
What does "1 x Tacet" mean?
4
What do the terms "pitch relationships" and "vertical dimension" signify in relation to harmony?
5
What does Opt. S.D. mean?
1
What does 'angular' mean?
2
What does ben tenuto il basso mean?
1
Is there a definitive list of forms for classical music?
6
Two different clefs at the start of a piece on the same hand