What are the attachments used for on this bass drum?

Non-percussionist here. Questlove (The Roots’ drummer on Jimmy Fallon) has this colorful bass drum with some enhancements such as a separate, smaller drum (snare?) attached to the front and a hole with appears to have a microphone shoved in it. 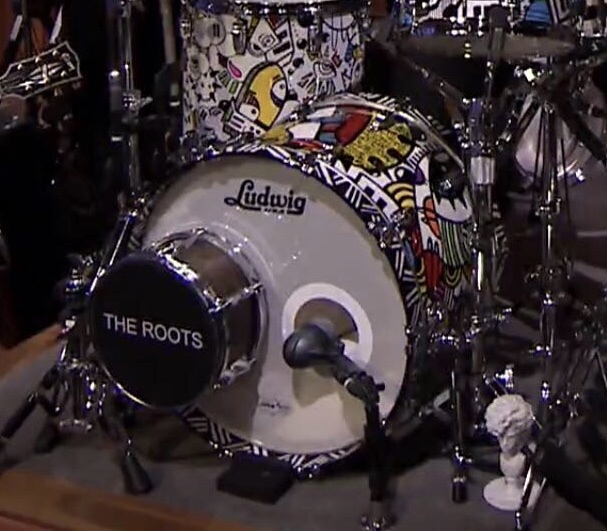 What are all the attachments to his bass drum and the benefits of them?

That's actually not a snare drum but a “huge-diaphragm microphone”. This was a gimmick some studio engineers built out of, indeed, a snare drum shell by mounting a subwoofer in it instead of the drum head. (Note that a loudspeaker and a dynamic microphone capsule are by construction basically the same thing, just the latter is normally much smaller, lower powered, and driven in the opposite direction.)

A couple of years ago, Yamaha brought out these devices in a ready-built form.

The idea behind this concept is basically that the bigger the diaphragm, the deeper in the near field you are, which improves the low end (ideally, without compromising the transient response as an EQ boost would). The tradeoff is that these “mics” don't really handle high frequencies at all due to inertia issues, that's why such a mic is usually paired with either a conventional bass drum mic or a condenser microphone which has even better HF response (but is by itself not usually used for bass drum because the large-diaphragm variants be be in risk of getting damaged by the sound pressure levels when you mount it as close as you want for the LF).

Not the answer you're looking for? Browse other questions tagged drums drum-kits drum-hardware bass-drum or ask your own question.

14
Should I retrain myself to be a right handed drummer?
19
How do you successfully share another drummer's kit at a show?
27
When playing drums behind the beat, what instruments define the actual beat?
6
Are kevlar straps on bass drum pedals reliable?
11
Should I rest the bass drum beater on the skin or in air when playing a drum kit?
7
What is the name of the drum you wear on your back to play without your hands?
4
What does this “legato” means for bass drum?
3
Best way to practice bass (drum) technique without a bass drum
1
Is the 808 sound used as a drum or a bass?
3
Drum chart standards