Difficulty on deciding when to use grace notes

Writing down exact lengths this is what a piece of my melody (4/8) looks like: 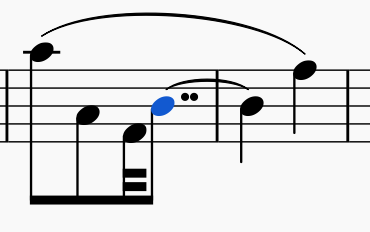 I assume this is a text book case of it being better to use a grace note like this: 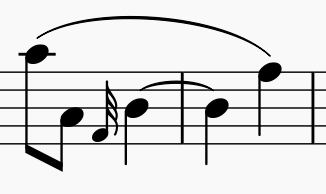 I'm having a bit of a hard time on deciding when exactly to use grace notes. For instance, this:

My intuition is to leave it as it is, since it occurs in between beats (as it should) But then it seems odd to have fixed-length notation in some instances and grace notes in others for the same kind of embellishments in the same score.

Grace notes and phrases do not as a rule carry harmonic/melodic/rhythmic meaning. Any accented note that is off-beat is not a grace note. Notes that are on-beat may be appoggiaturas (a particular kind of grace note asking for harmonic resolution, not stricken through and usually written with "at least" its nominal duration): they are a bit of the odd man out since they eat into the note value of the following rather than the preceding note, serve harmonic function, and it's actually the following, usually "in-harmony" main note that is unaccented and may even have a fuzzy/shifted starting point.

Appoggiaturas are not much in fashion these days. Their main place is in solo pieces or voices or chamber music where the execution typically relies on single players.

There are no completely reliable hard rules like in many musical issues.

Grace notes are usually used as Acciaccaturas. So, you'd use them when the notes are not melodically and harmonically essential. They are ornaments, that add a little flavour to your melody. Basically, if you remove them from the melody, the sum of it would be the same.

Is not so easily readable by someone not so experienced. I'd suggest to use something less confusing, unless you are aiming this to be read by someone on a high level of sight reading.

Not the answer you're looking for? Browse other questions tagged notation composition rhythm or ask your own question.

1
How does one choose the correct time signature to match the tempo and vice versa?
1
Advice for figuring out unusual rhythms when composing
10
Many, seemingly arbitrary time signature changes
3
How to play eighths (quavers) interspersed only with quarter notes (crotchets) in swing time
2
Errors with slashed grace notes in LilyPond
1
Are grace notes ever notated with notes of exact duration?
2
Grace notes at beginning of “A Media Luz”
3
Musescore issue: Bar going across the page
2
Usage of grace notes in a Yiddish music theater song