A standard way to count rhythm across bars is to pick a count for the beats in a bar and then use the first beat as the bar count. So in 4/4, counting quarter notes, one counts:

As subdivisions are added, typically syllables are used instead of numbers, such as "and" for eighth notes. So:

One can also imagine adding some indication of where one is in the form to the count, etc. For songs with simpler form or with clear lyrics it isn't too bad, but I'd love to have a way to keep a mental count that makes it difficult to screw up where I am in the form.

This method reuses both the number and certain syllables for more than one purpose. E.g. "Two" can mean both the second bar and the second beat while "and" can be either the off beat eighth or the first part of a triplet. Usually this isn't a problem, but I'm finding it a bit taxing as things get more complicated. E.g. at fast tempos I'll count "Three" and then sort of think "was that the third bar 'Three' or the third beat 'Three'?" I've mostly gotten to the point where that doesn't throw me off, but it seems like it is taking effort. Counting a triplet rhythm where there's also something exactly in the middle is quite vexing.

I've talked to musicians who use a pattern of sounds, e.g. "dig ga da" for triplets, and then either just know where they are in the song or use the chord progression and lyrics to keep track. For specific patterns there are mnemonic devices of using words or phrases to get the feel of the rhythm, e.g. the teach rhythm with food approach. Neither of these seems like a really robust tool.

Now I'm pretty sure someone somewhere has put thought into this and designed a system that tries to solve these issues. I don't really want to overthink this and I'm well aware a lot of it is just practice, but I'd love to hear how others approach trickier counting or, ideally, read a writeup of a really well thought out system for counting complex patterns.

Searches here and on Google have turned up relatively little, but perhaps I'm just using the wrong words. Anyone have thoughts or pointers?

Edit: per xerotolerant's answer, the search term I was looking for is "rhythmic solfège." There's actually a pretty good Wikipedia page, which I'm surprised I didn't find originally.

To start with, you can use words with the right number of syllables to count subdivisions. These are just any words that fit a subdivision. There are many great examples in Finnish, but the only ones that come to mind is tri-o-li-tri-o-li, trioli actually meaning triplet in Finnish, and len-to-a-se-ma for quintuplets, meaning airport. In English you could use the same approach and count tri-pa-let. Another one i found is ba-na-na for triplets. Additionally i found a pdf with more stuff, and a forum thread discussing it.

However there is a system i think I'd closer to what you're looking for. It's a system that uses Indian syllables like Ta-ka-di-mi. Lots of examples come up just searching Takadimi, one i found is takadimi.net. There is a wikipedia page on the subject. I also remember Ben Levin's video being quite good, with a focus on large compound meters.

This might be right for you, but i myself have no problem counting 1-2-3-4 even at fast tempos (hint: don't say the entire word), and pronouncing the 1 a bit louder. My system for odd meters is simply counting it out, and if it's too fast you can skip every other count, like this:

Say the examples out loud to compare efficiency. Notice how in the second example, the last and first count are closer together than all the others. This is true for any odd count. I find this a good indicator for keeping track of the "one". For larger meters i simply restart the count (i.e. divide into smaller groupings) somewhere, for example:

By restarting the count you are splitting the measure, thus you are getting a sense of where the middle is (if you split it down the middle). Adapt this method to the rhythm you are trying to play if you decide to use it.

Takadimi rhythmic solfège sounds like what you're looking for. I was taught a variation by a piano teacher. Beats are subdivided using predetermined syllables. Ta - ka - di and mi. A single beat would just be ta.

A beat divided into two equal parts would be ta - di.

If you need to subdivide further then you just think of the shortest notes as being ta - ka - di - mi. The longer ones you just elongate as ta - ah - ah - ah. ( as many ah's as necessary) 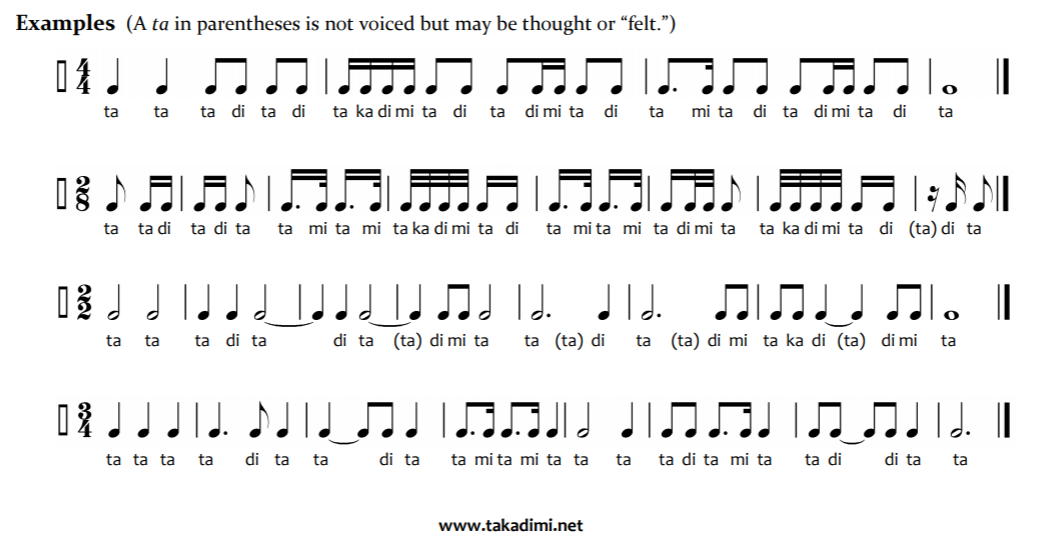 Here is the official PDF on it in the mean time. Takadimi explanation

Melody is form. I'm a jazz drummer and play sometimes simple and sometimes complex forms. Everything I am playing should serve the melody. Therefore, if I have internalised the melody and am singing it internally whilst I improvise I never get lost. Nobody wants to hear a musician playing by numbers. It's a useful tool in the practice room but for freedom of expression through improvisation it is not. Just my opinion.

4
What is the meaning of the song "Solid Four"?
7
How is the cha-cha counted?
2
How are varying degrees of accent notated?
3
Confusing rhythms/tuplets in Le Sacre du Printemps?
3
Am I counting the beat on my 4/4 meter correctly or not?
4
Proper way to count beats
5
Counting duplets
1
How can I count steady while also playing a non-steady rhythm?
3
Using rhythmic solfege to count a dotted eighth - sixteenth rhythm