I have a mini-score of Beethoven's Eroica Symphony (Edition Eulenburg).

In the first movement, the timpani line specifies Eb and Bb which is not surprising since the piece is in Eb. The surprising bit is that no key signature is used so it appears to indicate E and B natural. I guess that before the development of pedal timpani, the precision was regarded as redundant but it looks rather odd to modern eyes.

I don't have any scores for newer pieces that require pedal timpani. I presume that key signatures will be used.

The question: was this lack of key signature standard or common and what is normal in newer music?

The second movement of the Eroica requires C and G. So, I expect that pre-pedal timpani, four would be required. What would be usual today?

Edit: For the benefit of future readers, I have corrected my original phrase "chromatic timpani" to "pedal timpani".

It's even worse than that! Look at a section of the first edition score (available on IMSLP http://hz.imslp.info/files/imglnks/usimg/e/e2/IMSLP46066-PMLP02581-Op.55.pdf

The timps (they're on the top line of the score) are given just a 3-line stave, and notation doesn't go much beyond an indication of 'the high one' and 'the low one'. A slightly later convention was to write timps as C and G, whatever the key. That couldn't last long, of course! Even as early as Beethoven's 8th and 9th symphonies the 'tonic and dominant' convention was being broken, he used octave tuning.

Beethoven's timpanist wouldn't have had 4 kettles. He has 8 bars of slow 2/4 in which to re-tune for the 2nd movement. Plenty! The indication is just 'Timpani in C'. C and G would have been assumed. 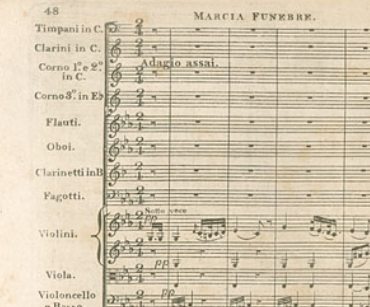 When valveless brass instruments were in use, the timps were often grouped with the brass in the full score. That meant that the entire group of staves had no key signatures. In fact in the first edition of the Eroica, the timp staff in the first movement is reduced to only 3 lines, to save a bit of vertical space.

The modern practice is to group the timps on their own, or with the rest of the percussion.

Four timps were not required. They would be retuned by hand between the movements, which doesn't take a professional long to do. In fact "non chromatic" timps were often retuned during a movement in 19th century works - this can be done quietly enough to be inaudible. If there are four timps on the platform in front of the player, they will usually be of four different sizes (covering different ranges of notes), and therefore not suited to "avoid retuning" in music of Beethoven's era.

In the baroque period, timps were often written as transposing instruments like the rest of the brass section, with written notes C and G. In fact, there are no surviving written timp parts at all before the 16th century - apparently, the player learned what was required "by ear".

Until composers started to write music that could only be played on pedal timps (the correct term for your "chromatic timp") i.e. starting at the end of the 19th century) all that was required was a textual statement of which notes the drums should be tuned to, with a very few execptions (e.g. Berlioz's use of 16 timps in his Requiem).

Not the answer you're looking for? Browse other questions tagged key-signatures timpani or ask your own question.

9
Why are double strokes (with the same hand) taboo on timpani but recommened on snare?
3
How should I dampen timpani?
6
Do timpani have access to all notes in their playing range?
4
Should fast timpani notes be treated as a roll?
3
Timpani Choke Notation
4
(0,1), (0,2) and (0,3) modes of vibration for a timpani
1
Why were timpani tuned most often in tonic-dominant?
1
Can a timpani player play more than one note at a time?
5
Question about this thing for timpani