I'm reading the score of Bartók's Concerto for Orchestra, and I've come across some unfamiliar markings in the score: 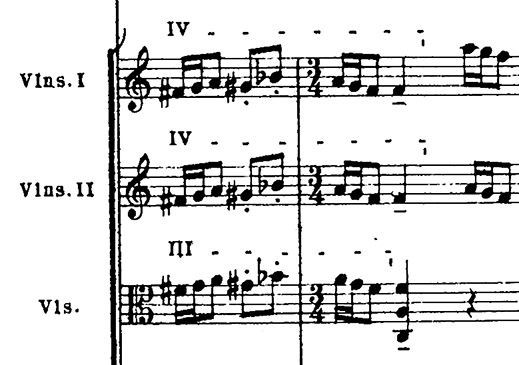 Google has informed me that they are used to specify which string the players should be using. I'm not a string player, so I'm curious about why one would specify the string - it probably changes the sound quality compared to the "default string", but in what way? I'm not sure I can tell a difference from the recording I have. Are there more examples that show how this technique is used?

The Roman numerals often indicate that the notes should be played on a particular string. For the Violin, I = E-string, II = A-string, III = D-string, and IV = G-string. In your example, the first and second violins are expected to play the passage on the G-string in 6th position (nearly halfway up the string). The violas are also meant to play on the G-string (III for viola). Notes played high on the G-string have a very dark and beautiful quality which cannot be reproduced on the D-string.

The violinist usually can figure out which is meant by context.

Example of Roman Numerals for Position

Not the answer you're looking for? Browse other questions tagged notation string-instruments or ask your own question.

2
Numbers above notes
2
Is there more than one use for Roman Numerals in music notation?
0
What does the caret symbol ^, mean in guitar tablature?
2
String Instrument Bowings
6
Letters m, n and v above roman numerals in functional harmony notation
4
Questions on how to write sordino directions
5
Roman Numerals and VII#
5
Roman numerals below the note in violin
5
Chords as Roman Numerals: how to represent in-between chords?
5
Four-note arpeggio on string instrument