This might be a cringy question but can you play a minor pentatonic scale of any key with other keys: for example, playing a G Minor Pentatonic scale then switching it a an A Pentatonic minor scale. Of course I already know you can play the same key with different patterns.

You can play any scale over any chord (or key). The question is if it sounds good to you—which sounds a like cop out—but it really does come down to taste.

If the scale that you want use has a lot of notes in common with the current chord being played, it will generally sound very consonant or "inside" (because the notes are inside the scale). When the scale shares very few notes or none at all, it will sound very dissonant or "outside". Both have their uses especially when you use them together—as in playing "outside" for a bit and then resolving to an "inside" sound. That's the part where taste comes in—how far outside can you get where it still sounds good to you and for the genre that you're playing?

Here's an example of how major pentatonic scales relate to C major. You can get the minor pentatonic version by transposing down a minor 3rd (ex. C Maj -> A min): 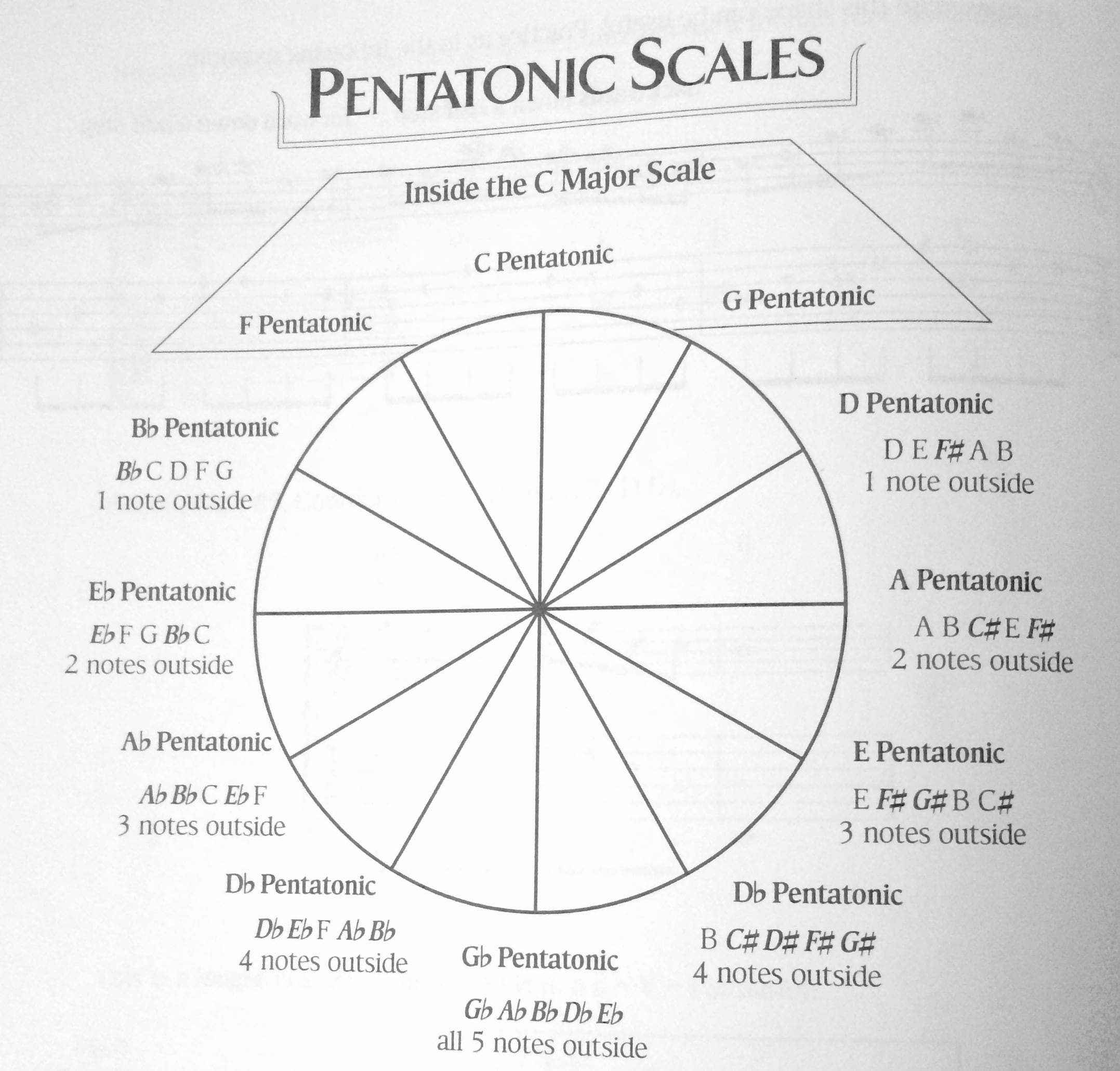 (note that there's a labeling typo in the diagram, the Db on the lower right should read B)

With all that said here are a few suggestions to get started:

You can do this as a technique to find other notes that you like, but what you are likely doing is implying notes from other scales: let's take an example

You're in a minor using a minor pentatonic:

The you try E minor pentatonic:

It sounds good. But what you are actually probably enjoying is the one additional note: B. what might sound better would be to incorporate this note into your playing, and play these 6 notes: A B C D E G

Experimenting using other pentatonics can be a good way to find other notes that you like within a song, but if you do that, make sure you then find where all those notes are in the same position as your home key pentatonic: that way you will learn something about the notes themselves, and instead of just "moving the pentatonic box", you'll learn something about what additional notes sound good in a particular song you're playing. Don't just take your first position pentatonic and move it around the neck of the guitar, that way you are "hiding" your own musical discoveries from yourself!

The minor pent strictly speaking fits only the chord of the same name. However - it makes interesting listening when used over the same name major chord. Guitarists in particular have used it for decades. In fact, some of the solos used on tracks from '60s etc. are made up entirely of those 5 notes. Even when the underlying chords change!

It works, but there are better fits. But the question is 'can you?', to which the answer is 'yes'.

Let's take the notes from Am pent. A C D E G. Now those from the chord a 4th higher. D F G C A. Note (pun intended) that playing the first set of notes on A works, but with the second set, there's only one note different. Let's go a 4th lower. E G A B D. The original C is replaced by B, the others remain. So, with careful selection of notes played - and where they're played - 80% is the same anyway. This is why using Am pent. notes all through a 12 bar, with A, D and E chords, works fairly well. One or two 'avoid' notes, isn't too bad !

If you are asking whether you can use Am pent. notes over, say, chords in F#, well, try it ! Your ears will probably provide an answer. Not really. But, music is all in the ears of the listener, and stranger combinations of notes have been produced. So, instead of asking for our guidance, give it a try. You may (or may not) like the result.

7
Approach to learning arpeggios for chord-tone soloing (shapes or notes)
14
Pentatonic scale with a sharpened 2nd note, any name?
15
Difference between minor and major pentatonic scale boxes?
1
How to play a Pentatonic Major using a Pentatonic Minor 3 octave shape
7
Singing what you're playing vs playing what you're singing
2
Confusion about mixing major and minor pentatonic
1
Confused about how to know the chord progression for each scale
4
Are there “rules” for improvising with the minor pentatonic scale over 12-bar shuffle?
4
Learning Minor scales through 7 patterns (Guitar)
2
Soloing in any key on guitar. Knowing the fretboard or knowing the boxes?