In "The Geometry of Music", Dmitri Tymockzo discusses voice crossings in measures of voice leading sizes:

"I consider a measure of voice-leading size to be “reasonable” if it satisfies two basic requirements: first, it should depend only on how far the individual voices move, with larger motion leading to larger voice leadings; and second, it should judge voice leadings with voice crossings to be larger (or at the very least, no smaller) than their natural uncrossed alternatives."

"I propose that any method of measuring voice leading is acceptable, as long as it does not have the counterintuitive consequence that “voice crossings” make a voice leading smaller. It is actually quite easy to formulate this principle mathematically: if a metric is not to favor voice crossings, then it must treat the collection of distances {x1 + c, x2, …, xn} as being at least as large as {x1, x2 + c, …, xn}, whenever x1 > x2 and c ≥ 0. Intuitively, this means that the metric should not prefer an uneven distribution of distances, such as {4, 0, 0} over a more even distribution, such as {1, 1, 2}"

Why should voice leadings with voice crossings be judgded as larger than their uncrossed alternatives? And why does such metric does not prefer an uneven distribution of distances over a more even one?

Tymoczko is really discussing voice-leading efficiency here. In short he's saying that, given multiple progressions that have identical pitch content (but with the pitches divided among the voices differently), voice leading without voice crossing will be more efficient (that is, smoother and with less movement among the chords) than the progression(s) with voice crossing. 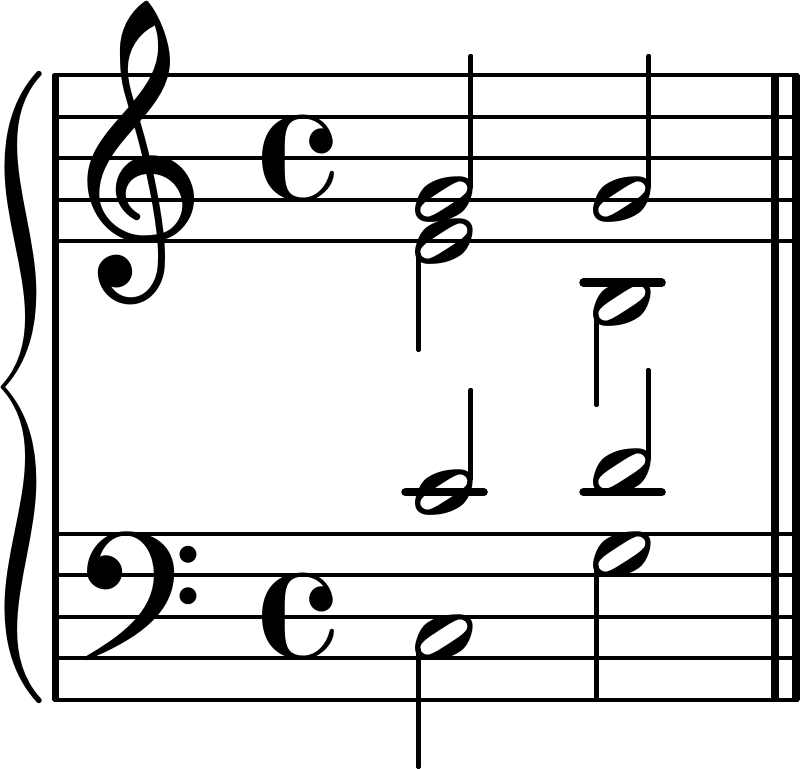 In the above example, the voices move:

This combines for a total motion of 14 half steps. Important to note is the voice crossing in the second chord due to the alto being lower than the tenor. 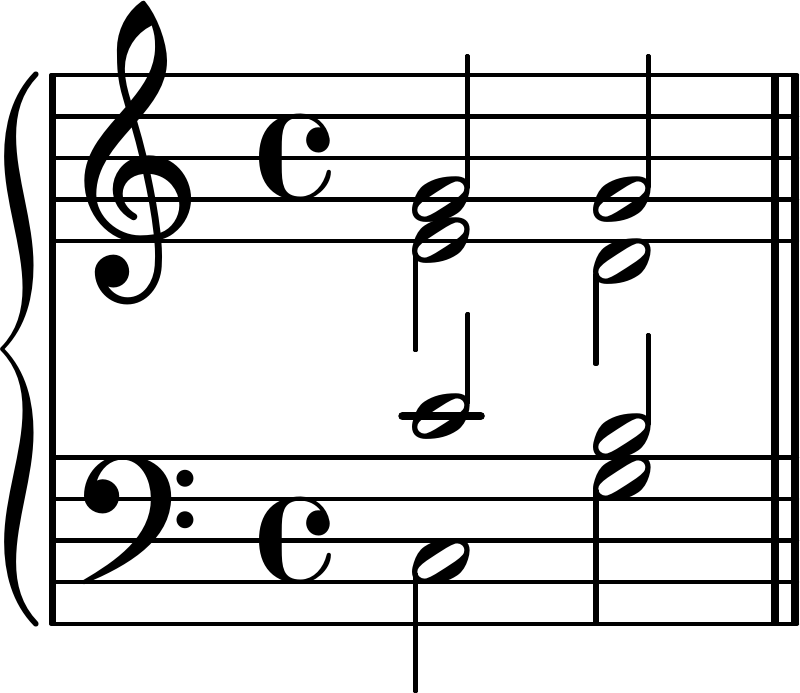 In this example without voice crossing, the voices move:

This combines for a total of 10 half steps, decidedly less than the 14 half steps in the voice-crossed example above.

As for the "uneven distribution of distances," let's look at the distances moved again: {0,5,2,7} in the first, and {0,2,1,7} in the second. Whenever we have a large leap, it can be viewed as a result of voice crossing; notice how the {5,2} in the voice-crossed example is smoothed out to {2,1} in the second example. As such, typical efficient voice leading will not have these uneven distributions, because they suggest possible voice crossing.

This uneven distribution becomes even more clear when we remove the bass voice: we have an uneven {0,5,2} in the voice-crossed example compared to an even {0,2,1} in the more efficient example.

(Note: for another recent answer where I discussed voice-leading distance, see Can one measure the "distance" between chords? If so, how?)

Not the answer you're looking for? Browse other questions tagged theory voice-leading or ask your own question.

21
Can one measure the "distance" between chords? If so, how?