Why you need a rest here in this score?

This is the piano sheet music for Elgar’s Variation, Nimrod.

Please do note: I am currently learning time and key signatures with my theory teacher, but in looking at the music here I can not understand why this rest is required. 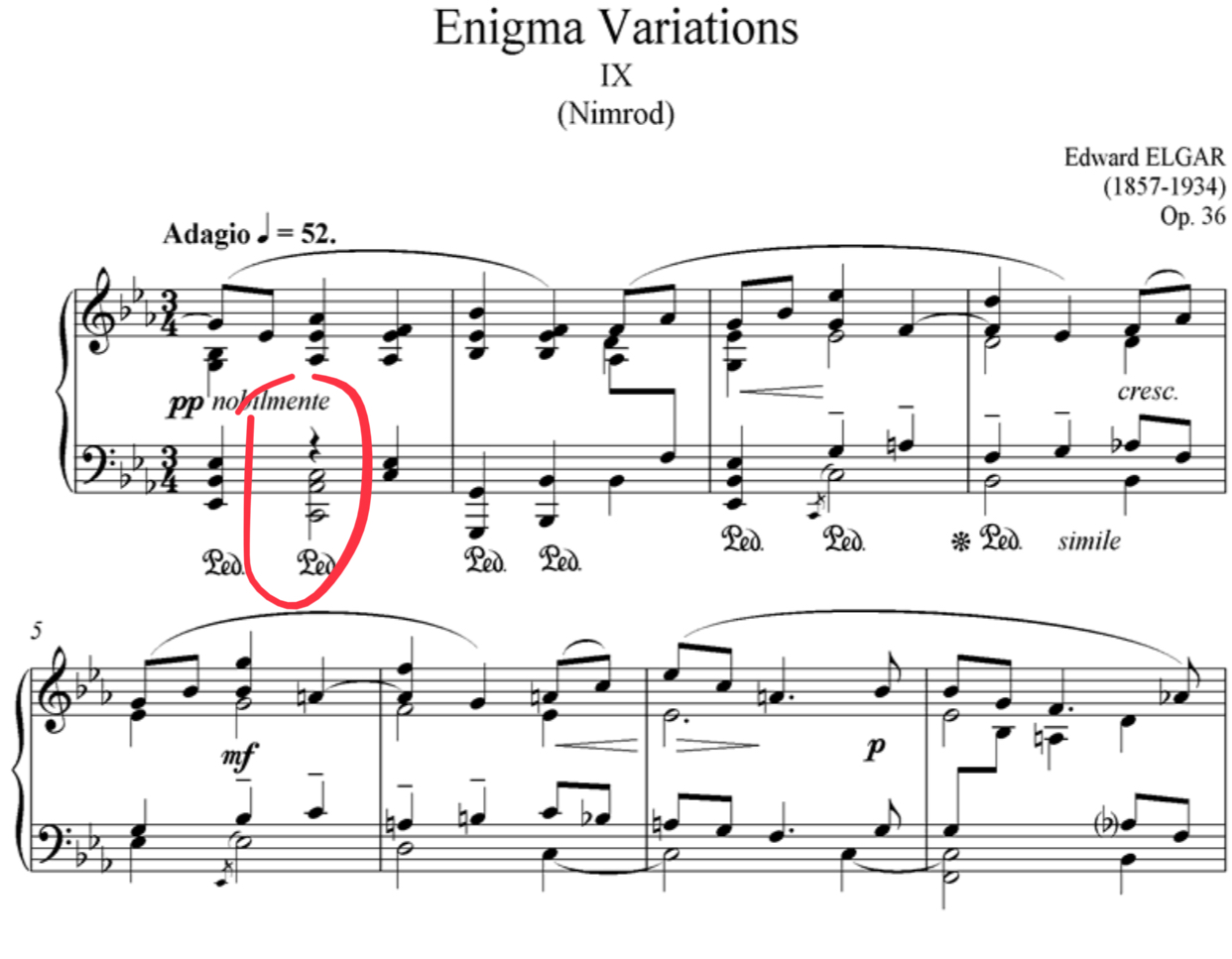 It comes from another voice, as Todd Wilcox says — a voice that's silent on the second beat. By writing a quarter-rest for that voice on the second beat, and writing it on the staff where it's about to have some notes, we properly set up, in advance, when that chord takes place. Yes, the quarter-note duration already exists on the upper staff, but that's a long long way away. The rest establishes that information locally, on the lower staff, to improve clarity.

A bigger question is where is the middle voice for the first two beats of measure two? And I'm a bit wrong because measure three seems to have four voices in it. Perhaps that's the titular enigma.

On further consideration, I think there are four voices the whole time, and it's just notated in an unclear manner. I think the lower middle voice plays the Eb below middle C that is the top note of the first chord in the bass clef, then the lower middle voice rests for the second beat, and then the third beat is the C and Eb in the bass clef. The upper middle voice is the G and Bb below middle C in the treble clef for the first beat, then the second and third beats are the middle Cs that are the lowest notes of the treble clef chords. Then they proceed from there.

Though clear, it would be marked wrong in a theory exam. The correct notation would actually be this. Each voice technically needs to show a complete bars worth of beats. 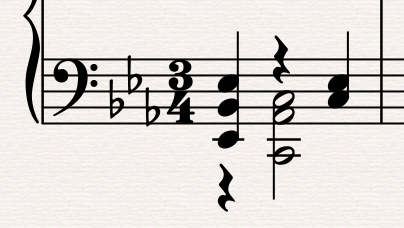 As others have said, there are multiple voices. Pictures are helpful: 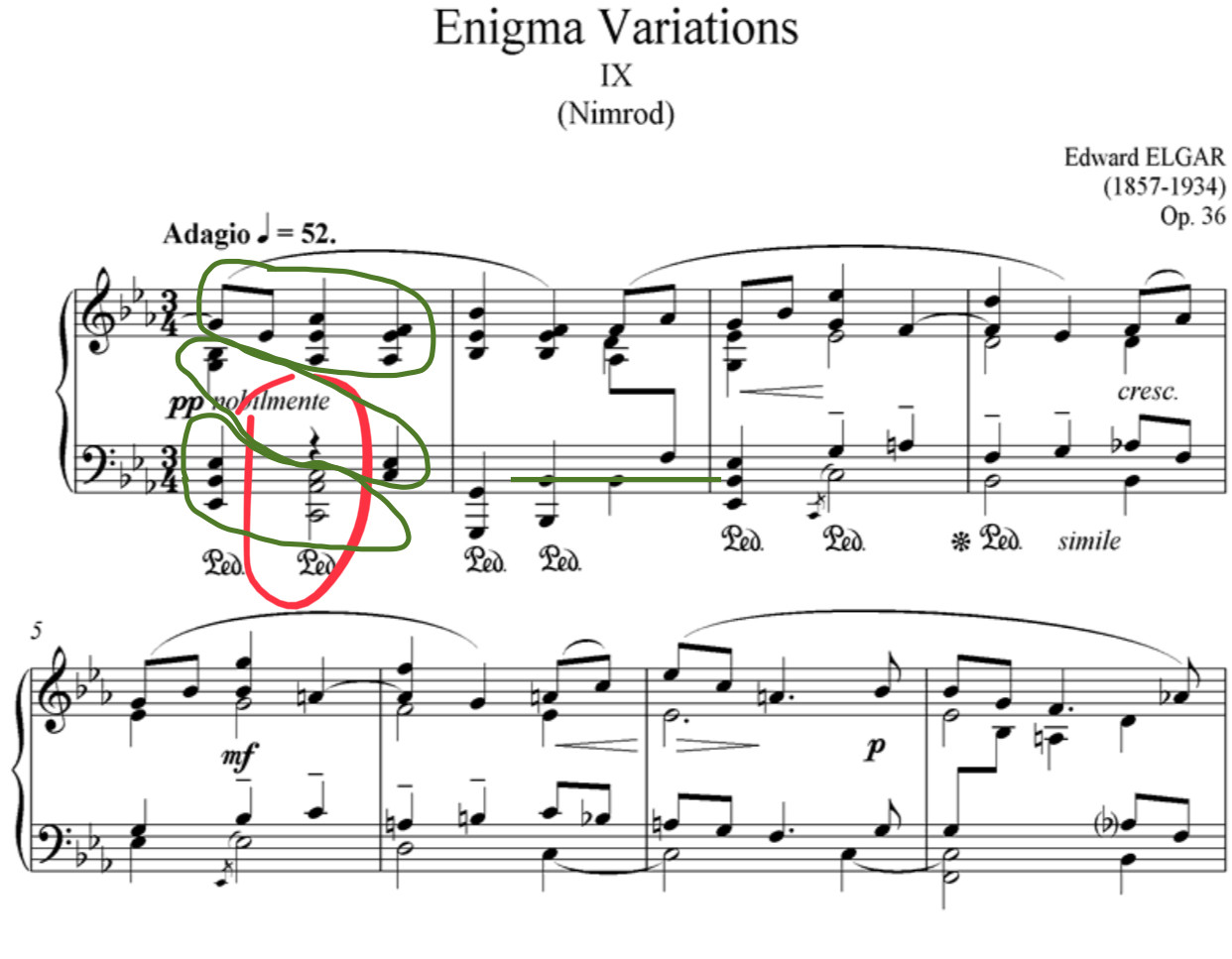 Common practice nowadays is to show all notes that are played simultaneously on a staff using a single stem if they start and end at the same time, and if nothing else will happen on that staff during that time. This is done even in choral music where a staff is shared e.g. between soprano and alto, or between tenor and bass. Notation is only divided into up-stem and down-stem portions at beats where different notes start and end at different times, or when there are distinguishable voices (e.g. sopranos and altos) and some but not all should refrain from singing on that beat.

Note that on beat 3 of measure 2, the treble clef actually has three voices, with the middle one playing a quarter note while the outer ones play eighths. The bottom voice is beamed with the eighth note on the second half of beat 3 in the bass clef because doing so avoids having to write an eighth rest for the first half of that beat, and because it makes clear that that note starts at the same time as the quarter note but lasts a different duration.

Had the bass clef not had an eighth note that could be beamed to that note in the treble clef, other ways of notating that measure would be:

Compared with the above, the use of the cross-staff eighth-note beam was a reasonable "least of evils" judgment.

A chord on a staff is executed immediately after the preceding chord, held for its full duration. If the quarter-rest were absent, the (c e-flat) chord at the end of the 1st bar would be played on the 4th beat, instead of the 3rd, as we would infer from its alignment with the chord in the upper staff. The quarter-rest explicitly indicates a splitting of the lower staff into two simultaneous "voices", but only in a notational sense. There is no functional splitting of voices.

At a large scale, I would say the voices act functionally as follows, though individual subvoices become discernable around the eighth-notes:

2
Why are these notes written this way and how should it be played on the piano?

8
Is there a rest symbol that means “rest until the end of this measure”?
5
Time signature 3/4 seems to have more than 3 quarter notes in a measure
2
Why is this section on the measure 'grouped' with a 3?
7
Why are time signatures not used in this score?
16
Chord stretched across treble clef and bass clef
2
Why is the alignment of notes written this way?
4
Why’s there a rest over this note in “The Easy Winners” by Joplin?
2
Question on time signatures relating to compound and simple time with tuplets
2
How to remember how much irregular groupings are worth