Play a scale across the whole neck of the guitar

I have learned all the boxes, of let's say, the major scale. How do i play this across the whole fretboard?

When people solo, they play a scale across the neck. So how i do this? Everyone that i know that can do this, say it's easy, yet no one has been able to explain this to me.

This is why I highly recommend learning the scale by scale degrees rather than simple box positions that don't show any of that data. Knowing your note names is also important to know where your tonic is, but I'd argue that knowing your scale degrees is just as important since it allows you to still play the same patterns up and down the neck but in different positions while also knowing which notes are which.

This diagram is something I made myself and it clearly shows where all the notes are. If you take the left most position as the open strings this diagram spells out the F major scale, with low E as the 7th degree, but any of these positions can be played starting on any fret. I would suggest you not shift up a fret between G and B like a lot of other methods suggest because the defeats the purpose of the closer tuning in that it allows you not to shift and lets you play only 2 notes on either the G or B string, depending on which position you are at. That means you should end up playing the same notes on the 1st and 6th strings. Two of the positions consist of 4 fret spans (3 and 7) while the other five consist of 5 fret spans (1, 2, 4, 5, 6).

For E minor (for example):

One way to play the scales all over the neck is to practice the 5 shapes. Look at the 5 images on this page: https://eatsleepguitar.com/2014/03/20/the-foundation-pentatonic-diatonic-scales/

The 5 shapes cover the whole neck. Practice one shape in its position, over and over, until you can play it without thinking about it, over a metronome. Then practice the next one, then the next one, etc.

Solos can be improvised by playing the notes in these shapes. The pentatonic scale is particularly useful because all its notes sound good together.

Another good exercice is to write the name of the notes on the dots. It will give a sense of the scale and where the root is, as well the 4th and 5th, etc., and help you to naturally change modes by moving the tonal-root within the same shape.

Since you are just beginning, here is a very simple way to get you started:

If you can only play the notes on one string, once you get to the 5th fret, all you have to do is subtract 5 from the fret number and move to the next string to get the same note.

Of course there is much more to all this, but this method will give you a start and teach you something about how to move around the neck. Important:
Pay attention to the positions of your fingers when you play across the strings - they form patterns. You'll quickly learn where the notes are without having to count.

I am not guitar teacher - this is how I learned on my own, many moons ago and that was mostly for bass, where there is much less emphasis on 'shapes' than there is for guitar. Bona-fide teachers probably have better ways, but this way is straightforward, and it works.

(If you learn some theory - highly recommended - there are much easier ways too.)

To answer "When people solo, they play a scale across the neck. So how i do this?"

Learn the Stairway to Heaven guitar solo for this. Why? Because it is a great introduction to playing a solo across the neck using the A minor /A minor pentatonic scales to something that is very familiar.

Starting at the 5th position for the opening then proceeding up the neck with phrases to the octave 17th position of where you started.

You will learn phrasing and how the patterns connect as you move from one position to the next.

I believe that what you refer to as "scales" are not just notes in a row, I think your friends play in fact patterns and licks.

Actually it's not that useful to change shape while playing a straight scale, usually you do that to repeat a pattern but make it sound different by inheriting the fingerings while changing the degrees you are playing. It's a common thing guitarists do.

As an example look at the diagrams below:

3) you can switch shape every 3 notes

4) you can switch shape following an arpeggio. 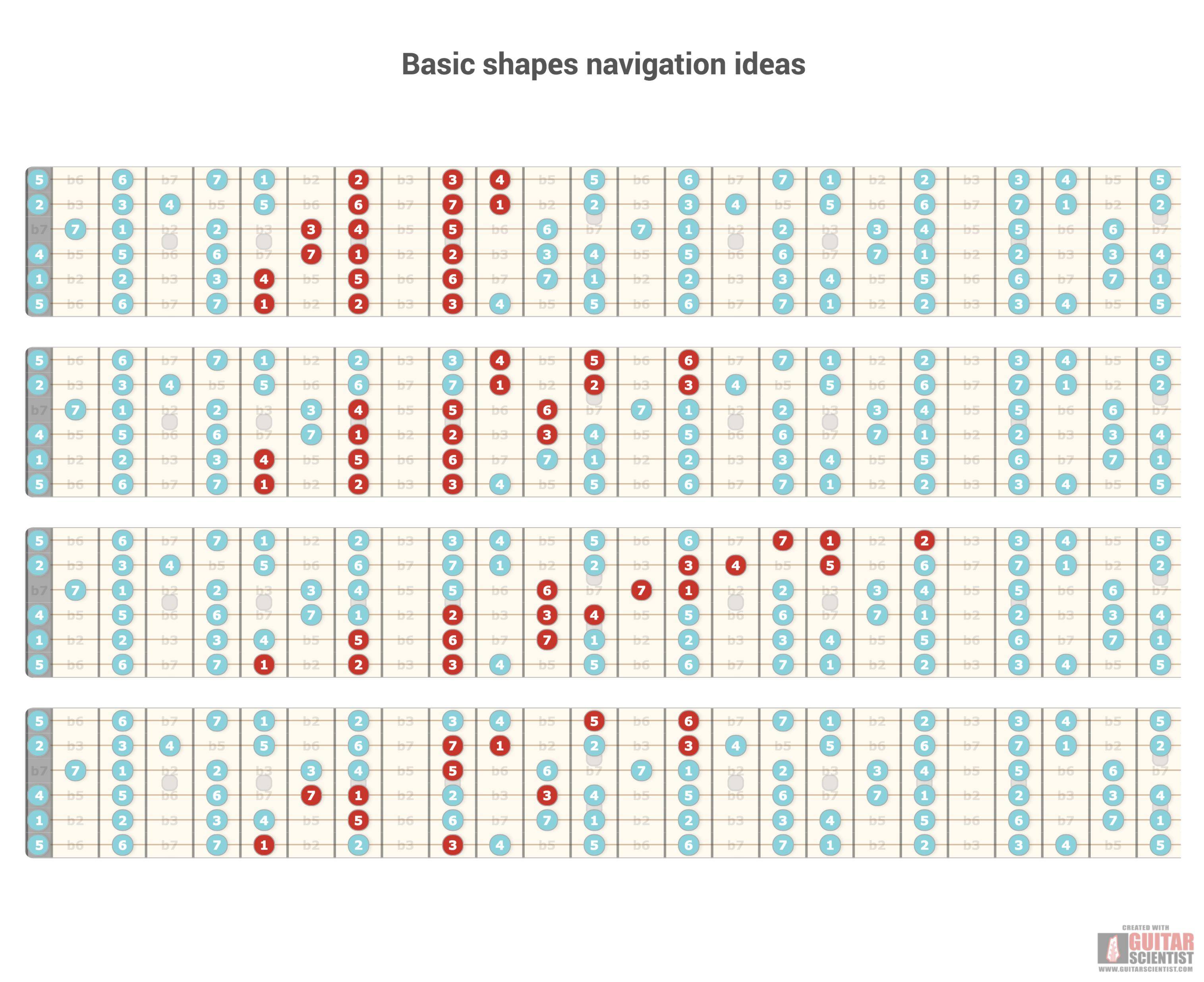 Browsing quickly through all the great answers, i noticed something missing (or maybe i just missed it). I'm just going to say that there are two steps to learning scale x:

Combine these freely once mastered. Playing a scale almost never means playing 1 2 3 4 5 6 7 1 2 ... In real life, learning to use the scale is more useful than letting the scale use you. Cliché, i know.

Nobody except Tama and Ramillies has given you the mechanical answer I think you're probably looking for. And neither Tama and Ramillies were as clear as they could have been. Let's break things down in more detail, using the box method you're familiar with. (Tama's recommendation about scale degrees is a good one, but it doesn't help you right now. This will.)

Let's say you're moving up the neck in a particular passage during your solo. You know ahead of time which is your lowest note and which is your highest note for that passage. Given that information, you first decide which box it makes the most sense to start out with and which box you want to end up in. (That could vary depending on the previous passage and the upcoming passage, but that's irrelevant to your actual question, so let's not get sidetracked.)

So your real question is: How do I move from box to box?

Ramillies gives you a different method--instead of sliding, which necessitates staying on the same string and moving your finger up or down it, Ramillies advocates using open notes to jump from position to position. However, s/he fails to break down what that actually entails (although, once again, the accompanying diagram does help after you understand what's being talked about). What you'll be doing is using the open note as a kind of trampoline to jump from one box to the next. To use that method, here's what you need to do:

As Ramillies points out, his/her method has its advantages, but it requires more thought so is more difficult to apply on the fly when improvising; and sometimes (though admittedly rarely) the open note may be two strings away from its predecessor or successor rather than just one. In that case it's still OK for fingerstyle but if you're using a pick it requires a string skip, which IMO negates the advantage of avoiding the slide. As a result I've used it when playing classical or flamenco passages, but I've never bothered with rock/jazz (electric). Still, it's your poison to pick.

Warning: This method will work best with classical guitar. It will break down if you try to use it in jazz etc.

If I need to run a scale across the whole neck, I always do it by using an open string. (Since most music for the guitar is in the keys with sharps, you can be quite sure that it will be possible at some point.) I play one half of the scale in the first position, up to a open string, most often E (1st string). While the right hand takes care of the open string, the left hand has plenty of time to move into a suitable higher position and finish the scale in there.

This is a very basic and braindead method, but it works best for me, even in some quite virtuosic pieces of the classical guitar. It's quite nice since you can play across the entire range in only two positions of the left hand: the first (you probably can do the scales the best in the first position, can't you) and the 7th or possibly 12th (if you perhaps want to go up to the top B or C). As you see, your left hand will have to move only exactly once, with quite plenty of time.

I guess this method would break down in very flat keys (each flat = 1 or more useless open strings), but there's only very little music written in them, so you needn't care :—). The flattest key you will regularly meet is, I believe, D minor, and there this stunt is still entirely possible.

P. S.: Don't forget to mute the open string after doing the leap. Your left hand will take care of it easily.

here is a very simple way to learn diagonal scales: a major scale is basically two major tetrachords separated by a whole tone. When you've figured out what a tetrachord looks like on the fretboard, move your fingers one whole tone down (or up) the string and play the next tetrachord and you're all set... you'll very quickly remember where the half-tones are in this sea of whole-tones and they'll soon be like beacons in the night! by the way, a major tetrachord is WWH (but you already knew that) figure out your own personal fingerings, they'll be as good as anyone else's

Not the answer you're looking for? Browse other questions tagged guitar electric-guitar scales fretboard guitar-neck or ask your own question.

9
How do I play notes in a scale/key freely up and down the neck without getting caught in boxes and shapes?
6
How to master the guitar fretboard
3
Guitar blues soloing- Minor/Major
2
Playing continuously through different scale boxes
4
Are Guitar Patterns an Absolute Necessity for Improvisation?
2
Putting (almost any) pressure on guitar neck warps sound
3
Guitar inversions / triads / CAGED
4
How do you think of the natural minor scale (or any non-major scale), when you play it?
3
How to improvise and play chords across the guitar neck?
0
How to "transpose" a guitar solo across the fretboard