I'm currently working on an arrangement of Christmas Time is here that is in the key of E.

The first chord played in this arrangement is an Emaj7, followed by a D7#11 which is not diatonic to the song, so I'm not sure of 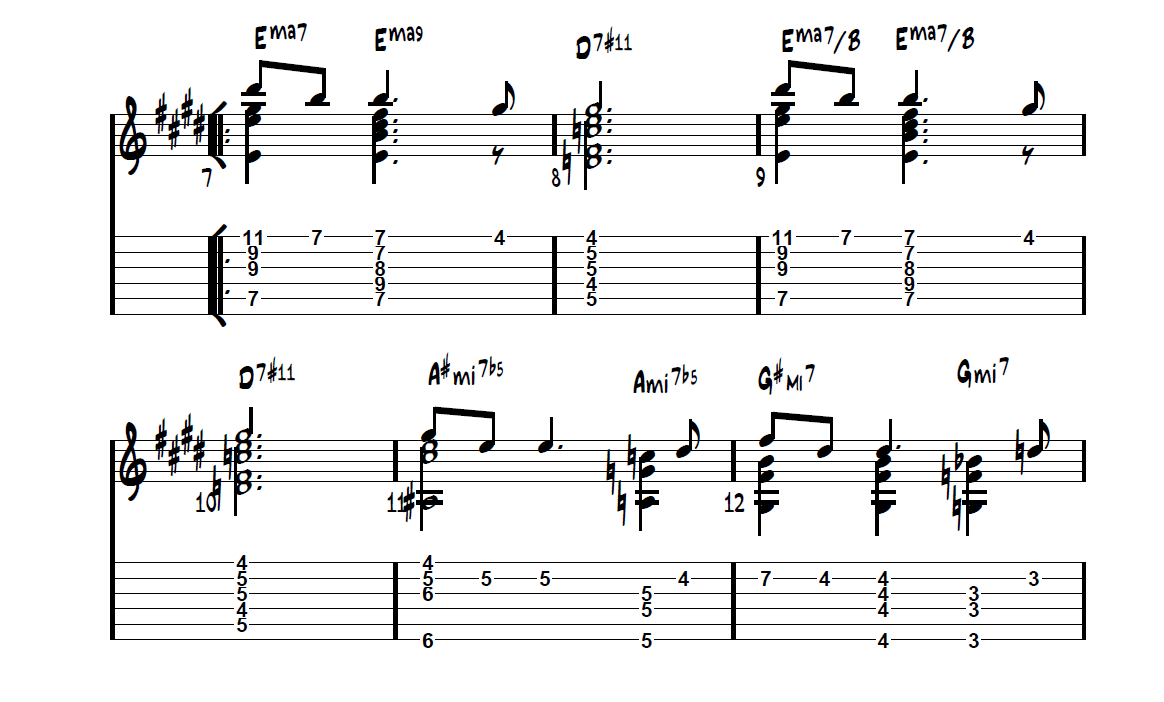 I agree with Laurence's answer, I just want to point out that the appropriate scale is the 4th mode of the A melodic minor scale: D lydian b7 or D mixolydian #11. Note that the name of the chord should indeed have a #11, not a b5, because the chord scale contains a 5:

The scale is obtained by applying the minimally necessary alterations to the scale of the key (E major) so that the notes fit the chord. Only two notes need to be changed to achieve that: the D# becomes a D (the root of the chord), and the C# becomes a C (the seventh of the chord).

This 'recipe' (minimally necessary alteration of parent scale) usually results in the most pleasingly sounding scale over chords that contain only a few tones outside the key.

The function of a bVII7 chord in a major key is usually to add a bluesy feel. This is achieved by lowering the 7th degree of the parent scale (D#) to a b7 (D), and using a dominant seventh chord (instead of a maj7 chord), i.e., lowering the C# to a C.

This, I imagine, from the sample first page at Sheet Music Direct? (Why not do it in the original key of Eb? E isn't always 'easier' for guitar, particularly when we explore jazzy chords and substitutions, which, almost by definition, will make much use of non-diatonic notes and chords.) It's followed by a repeat of the same 2-bar phrase. The printed chord name is wrong, it's D9(#11) - not Dmaj9(#11) which would include a C#.

The chord sequence doesn't take us anywhere, so it's not functional, just an pleasant alternative harmonisation of the G# melody note. The bVII chord is a popular choice for this sort of thing in 'jazzy' arrangements.

If you want a scale to play over it, look at the notes in the bar. D, E, F#, G#, (A), B, C. You could name this scale one way rooted on D, another way rooted on E. It doesn't really matter which you choose.

Two reasonable functional explanations are available using jazz harmony. First for most ♭VII7-I progressions, the ♭VII7 chord is interchangeable with the iiø7 chord. Hence, you can think of the | D7(♯11) | E∆7 | progression as being a iiø7-V7alt-I with a missing V7 chord: | F♯ø7 (B13♭9) | E∆7 |. *Second: you can alternatively think of the D7(♯11) chord as using D half-whole diminished, in which case the D7(♯11) is interchangeable with B7(♯11), the V7 chord for E∆7.

For your example, D9 (the ♭VII7 chord) is interchangeable with F♯ø7 (the iiø7 chord). Those two chords share the same notes:

If you replace the D7 chord with F♯ø7, you might think to improvise over F♯ Locrian. However, the D7 chord is actually D7(♯11), which means you need to play a G♯ rather than a G♮. This leads you to think of the iiø7 chord in terms of F♯ Locrian ♯2. The Locrian ♯2 scale is an advanced but an extremely common choice among modern jazz musicians for a iiø7 chord like F♯ø7. If you want more description of that scale, check out this outstanding answer. In fact, F♯ø7 and D7(♯11) are extremely similar: the F♯ Locrian ♯2 scale and the D Lydian Dominant scale are both formed from an A melodic minor parent scale.

Instead of thinking about the D7♯11 chord as using A melodic minor, we can think about this chord as using the D half-whole diminished scale (D E♭ F F♯ G♯ A B C). This scale fits D7(♯11) because it contains:

Not the answer you're looking for? Browse other questions tagged chord-theory jazz improvisation or ask your own question.

3
Seventh chords and the key a song is written in
3
Function of G7#11 in the Key of D
4
Can VI have a dominant function?
4
Descending Minor7♭5 Introduction/Motif Questions
2
How do I improvise over the V7 chord in minor?
6
Chords behaving as a melody
7
How to think of chord extensions when soloing over chords?
12
How to find scales to improvise with for “How Insensitive” by Jobim
2
Improvising: can't play what I hear (internally)