I have a two-part question.

And we all know about famous left handeds drummers playing right handed drum sets, but what about the oposite?

My band’s drummer is left-handed, and I am right-handed. If our drummer can’t make a practice or a gig, I will sit in for him. Playing on his lefty set opened my playing a little bit, but I could have reaped the same benefits on righty sets if I knew what to look for. I’d argue that it’s good to be able to do just from the perspective of being a more all-around capable musician, but it’s mostly a party trick.

I tend to play open-hand on a lefty set so I can use my right-hand leading patterns, and I found myself using the toms and cymbals for accents more than when I played cross-hand. It’s inspired me to play more open-hand on righty kits, as well, and to learn how to transition smoothly between cross- and open-hand. This, of course, means that I play left-hand leading patterns regularly now, which I had never bothered to learn before.

I will note that it was bloody irritating to learn how to play the bass drum with my left foot and control the hi-hat with my right. But you get used to it. Now, about a year in, I don’t notice the difference at all.

For me, it was the other way around :)

As a left-handed drummer myself, I played left-hand drumset for a long time. Switching to right-handed drum set made me think and unlearn any habits which had inhibited my progress before. (For example, my grip was sub-par, but because I essentially had to re-learn basic drumset technique, this was quickly fixed)

It also opened my mind, in the same way that drumming in, say, 3/4 is a good experience for someone who has only played set in 4/4.

I have never really gone back to lefty set, but I have noticed some improvements in my drumming.

I think anytime you take your playing out of its comfort zone you are going to learn something and improve. If you want to give this a try just take your right handed drum set and play it as is with your left hand on the hi-hat and the right on the snare. this allows you to open up your snare hand and move it around the kit without it being "crossed up". depending on how long have been playing you will probably pick the coordination up fairly quickly but it will take a really long time to get the feel right. all those years of playing accent patterns on the hi-hat and ghost notes on the snare are going to make things really awkward at first.

If you get some benefit from this exercise maybe you can also benefit from rearranging the kit to play full lefty. this will just compound the fact that you are dealing with your hands feeling out of place and now your feet will too.

Even though i don't love Dave Matthews band you can see some of the possibilities in the playing of Carter Beauford who seems to be able to play the set fully ambidextrously.

Note that he has a ride set up above his hi-hat and plays the ride and hat with his left hand for the most part but his kick is being played with his right foot. i think he also has a hat on his right side but don't think it used in this video.

by the way the nice thing about drums is that you can set them up how you feel comfortable so if you want to try it, rearrange your kit and give it a try. doesn't cost anything other than a few hours and a bunch of frustration. good luck!

This would depend on your current skill level. If you are a beginner or intermediate drummer, then there would be no possible advantage (other than being a party trick as Babu says) considering that you still need to build your skills and technique playing with the standard right-handed set-up first. If you are an advanced drummer, then perhaps you could possibly get some fringe benefits from attempting to play a left-handed set-up as b3ko and iPhoenix suggest... but to be honest, I feel like that is a bit of a stretch and you are still better off continuing to simply practice, learn even more advanced techniques (like open-hand technique on a right-handed set-up,) and add drums to and tighten up your right-handed set-up.

And we all know about famous left handeds drummers playing right handed drum sets, but what about the opposite? 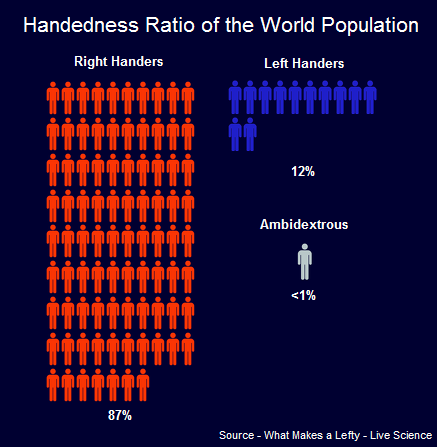 Finally, I will leave you with the same sign-off that I just gave on this question:

The instruments we use today are modern technology. They are manufactured and set-up the way that they are in order to be used as efficiently as possible. There may always be some novelty to seeing someone performing in some strange way; like playing piano while standing on your head. However, if anyone is playing an instrument in any way other than the way in which it was 'meant to be played,' then that person will LIKELY NEVER achieve the full potential of skill on said instrument (despite there always being exceptions to the rule.)

Not the answer you're looking for? Browse other questions tagged drums lefties or ask your own question.

2
Teaching a left-handed drummer on a right-handed kit?