How to count odd tuplets? 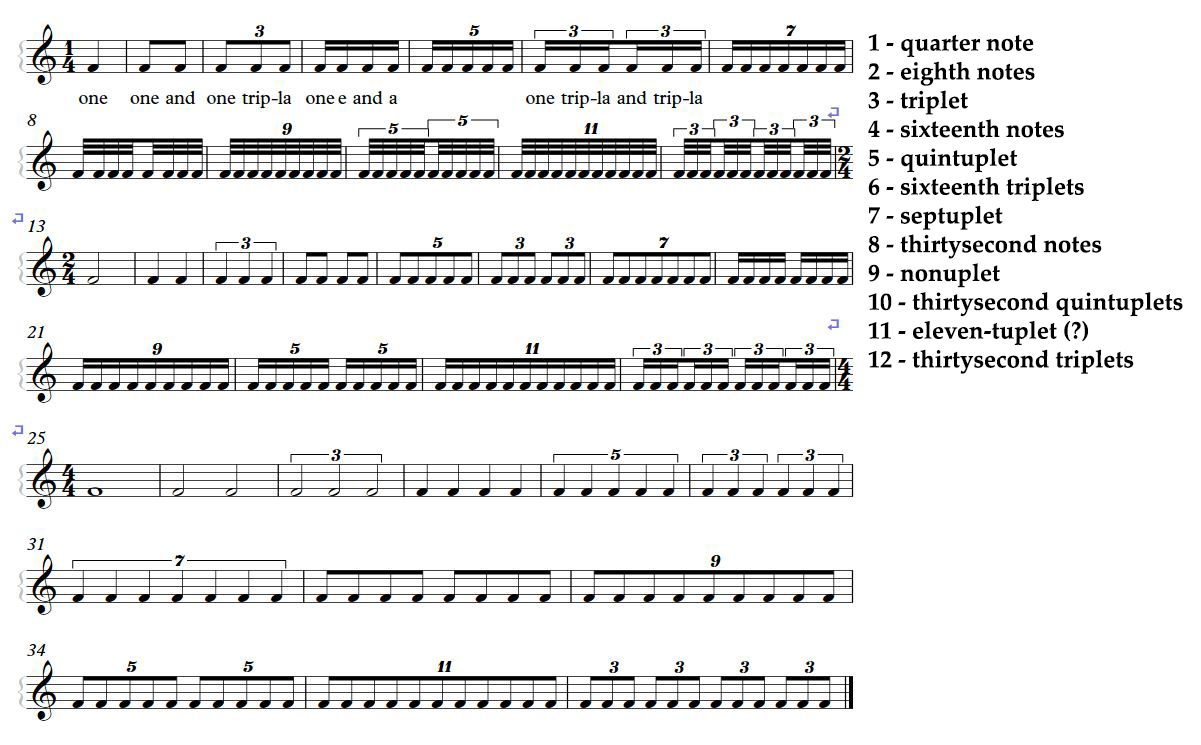 When I first learned how to play music I learned how to play the drums, and thus rhythm was the first thing I knew about music. I still feel like it was best to learn rhythm before pitch, melody, harmony, etc. and even today complex rhythms are something I look for and strive to achieve in my own music. I never joined drumline though, and never got much into practicing rudiments and that's something I want to improve on, so I come asking a question about subdivision.

Here I have layed out a chart that shows all the most basic rhythms I could think of in terms of a single beat, dividing the beat from one to twelve equal parts and doubling the all note values twice to give me three charts based on differing note values. I also included a list of the first twelve and the method I use to count the basic rhythms. My question is multifaceted: how do I count the rhythms I have unmarked, especially 32nd notes and quintuplets? Am I missing any special tuplets? Is there a good way to go about practicing them? Is there a difference between say, a sextuplet and two triplets, or a ten-tuplet versus two quintuplets?

Mostly I'm wanting to know a good way to subdivide and count odd tuplets such as these so I can better incorporate them into my playing/composing.

Sadly, I can't answer your question in whole. In fact, I would love to see a good, definite answer on this myself. But I think I can address at least some parts:

Am I missing any special tuplets?

Is there a difference between say, a sextuplet and two triplets, or a ten-tuplet versus two quintuplets?

Anyway, this is theory (from my 100-year old book). In practice, people don't care about this at all. What comes to my mind is Rachmaninoff's 2nd piano concerto, second movement:

You see that the natural way to play this is with 3 accents (1st, 5th and 9th note). So you will need to put the accents wherever your musical feeling tells you :---).

I guess that in theory, the 10-tuplets would work in a similar way (2 quintuplets = 2 accents, 1 10-tuplet, maybe 5 accents or maybe 1?), but these large tuplets are probably seldom meant seriously: see this question of mine: How are very long tuplets in Romantic music played in practice?

Is there a good way to go about practicing them?

I don't have any definite recipe for coping with them, but I have some tricks:

where the crossed note is first played (tapped) quietly and later just imagined, was quite helpful to me, even if you don't need to play the 3/5/7/whatever-against-2 polyrhythm itself. A good time to practice this is when walking (which naturally gives you the rhythm in the lower staff) --- you can silently tap the upper staff. (I think it can help with more complex polyrhythms too: you could make sure that the "halves" of both tuplets occur at the same time.)

So, when practicing quintuplets, I would try something like this:

(The accents are just to make it easier to practice, they should be got rid of eventually.) I would tap a long row of quintuplets, as in the first bar. I would repeat it quite a few times. When I feel comfortable with that, I would substitute one quintuplet with something "normal" (examples in the next bars --- it can be a quarter note, two eighths, a triplet... whatever), following immediately with one quintuplet, and so on.

Anyway, this sounds like I was an expert on insidious tuplets, but to be honest, I fail at doing them properly quite often. What I described is just what I find to be helpful. The good part of this is that you can practice everywhere: in a queue, in the public transport, etc. You can tap the rhythms silently with a finger against the other palm, or don't do anything and just imagine the rhythms, maybe nodding your head on every beat.

So, good luck with it!

16
How are very long tuplets in Romantic music played in practice?

10
How to tackle this tricky rhythm -- nested triplets?
1
Fitting melodies to beats!
2
Piano methods (classical) that address musical meter specifically
8
Learn music with odd rhythms
1
Help getting rhythm from head to staff
3
Confusing rhythms/tuplets in Le Sacre du Printemps?
16
How are very long tuplets in Romantic music played in practice?
2
Rules For Notating Tuplets
7
How to clearly notate tuplets, both "simple" and "complex," in irregular meters
3
How to practice this kind of complex tuplet structures appeared in Scriabin's Poem Op.32 and his Etude Op.42 No.2?