What is the term for multiple simultaneous vocal lines?

Is there a specific term for when a song has different vocalists singing different melodies at the same time? I know that polyphony refers to multiple simultaneous melodies, but is there a term specific to singing?

A song with an excellent example of what I'm asking about is Hello Seattle by Owl City (Spotify link). At the end of the song, the chorus is sung at the same time as a verse. Another example of this is at the end of Feeling This by blink-182 (Spotify link) (mildly not safe for work).

It's certainly a polyphonic device, and 'polyphony' is another name for 'counterpoint'. 'In harmony' doesn't point out the independence of the two tunes. A 'quodlibet' is a very specific type of humorous song. But I don't really think there's a better way of putting it than: 'The two tunes are sung together'.

Cole Porter was fond of this trick. Nice to see some current pop artists picking it up (though, listening to the track, they've mixed the second tune so far down that it's hardly audible).

Quodlibet is the term you’re looking for. From Latin for “as you please”, it’s two or more recognizable songs put together into another piece sometimes for lighthearted or humorous effect… and has been in place since the Renaissance. In fact, writing quodlibets was considered a demonstration of a Renaissance composer’s skill in counterpoint.

Examples include numerous works by Heinrich Isaac, Ludwig Senfl, Jacob Obrecht, JS Bach and many others especially in modern musical theater and even PDQ Bach—(listen to PDQ Bach’s Unbegun Symphony!). Pretty much what you might think of as today’s “mashup”.

There is no term that specifically denotes multiple simultaneous vocal lines while excluding multiple simultaneous instrumental lines. There are many terms that denote various ways in which multiple parts are played or sung at once, and some of those ways are historically or primarily vocal styles (fauxbourdon, for example).

Some of these terms (including some where there is relatively little independence among the voices) are:

And to counter your assumption that "counterpoint" cannot describe a situation with two independent melodies, consider the page Counterpoint Duet, which describes

A Musical trope. One character sings a song, then another character sings to the same chords but a different melody, then both sing together in counterpoint. Most often used to express arguments or show that characters have differing opinions on the same subject, though occasionally merely employed for fun.

Note the use of counterpoint to describe both characters singing together.

I don't suppose that a term specifically denoting vocal counterpoint would be very useful, because it is relatively efficient to add the adjective "vocal" to any of the existing terms. On the other hand, a term denoting counterpoint of independent melodies might be useful, because describing the concept requires a phrase of at least several words.

The 11th edition of the Encyclopædia Britannica (1911) has an interesting sentence on the topic:

The individual audibility of the melodies is a matter of which current criticism enormously overrates the importance.

The author of that article was Donald Francis Tovey.

Polyphony is the term. You can name specific genres like round or madrigal but they don't make sense to use when your examples are rock music.

This is sort of a "trick" based on presenting the two lines separately as verse and chorus and then combining them later. If the listener doesn't know anything about harmony and counterpoint it seems like something totally amazing happen, because most wouldn't expect separate sections to harmonize. But you can design music for that aim.

I think a round is commonly understood illustration of the mechanics. It isn't exactly the same - one melody versus song sections combined, and rock and traditional vocal music styles differ - but the musical device is the same.

...can also be written on four staves to show the melody is comprised of four short phrases that were written to harmonize with each other... 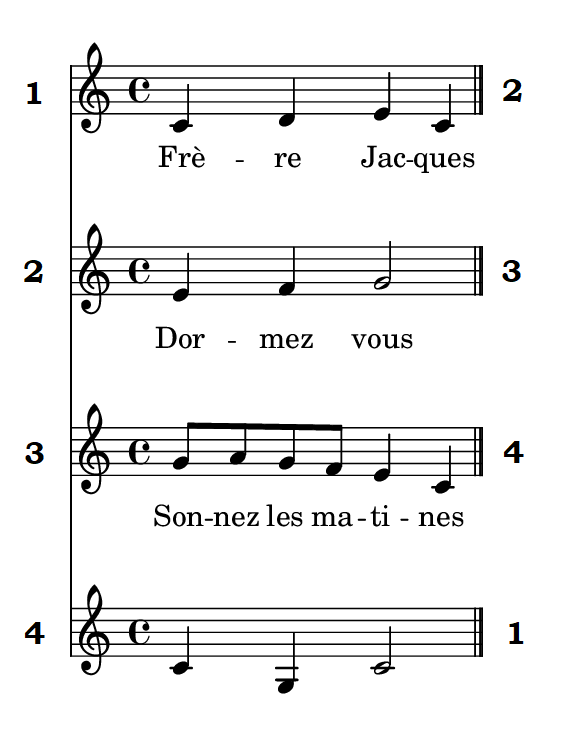 ...each of the four entries can just arpeggiate the starting chord and then the phrases concatenate nicely.

Of course I don't mean to suggest Blink 182 wrote their song as a round or they consciously wrote the two melodies together and then separated them into verse and chorus. The point is just when two melodies fit the same harmonic framework then can often be played together. You can do it deliberately or stumble upon it. The end result is counterpoint and polyphony.

I think the term you're looking for is counterpoint. See the song, "One Day More" from the musical, Les Misérables, which is an excellent example. The song is deconstructed in this Wikipedia entry: (scroll to the "Composition" section): https://en.wikipedia.org/wiki/One_Day_More

I think the word you're looking for is counterpoint. It is from the latin "punctus contra punctum ",point agst point. But it is not restricted to singing.

Not the answer you're looking for? Browse other questions tagged voice terminology or ask your own question.

10
Is there any name for two melodies that are being played at the same time?