I am attempting to learn all 60 root position seventh chords. I would like to do this in a way that advanced my playing ability most efficiently.

It seems my mind can only handle one thing at a time. Do you have any strategies to get these chords under my fingers in a way that gets the motor, sound, and theory cemented into my brain? Any particular exercises?

As of right now, I am just going up and down in one key to practice all major sevenths. Then I do all minor sevenths, and so on. This allows me to focus in on the chord quality sound and motor memory, but the theory escapes me as playing chromatically doesn't help my understanding I think.

Also, do you think I should continue to only work on root position until I have them all down and then do inversions?

I wouldn't do them that way, personally. It's quicker to learn things if you find ways to apply them as you go; otherwise, you lose track of why you decided to learn them in the first place.

For example, start with C, a I-IV-V-I progression. Play the chords in root position first, and take note of what type of seventh chord each one is. I and IV are major 7th chords, and V is a dominant 7th. Now, look at inverting the chords in such a way that they fall easily under your hands. If you're just blocking the chords like this, it's most common is to play I in root position, and IV and V in second inversion:

This minimizes the amount of movement you have to do from chord to chord. Even if you don't care much for the sound, it's a good idea to learn this, because if you're aware of the easiest inversions involved in moving from one chord to another in a progression, you'll find it easier to harmonize music at sight.

If you're working with a bass line, start by playing all the chords in root position. Something like this: 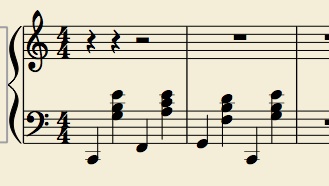 These chords are understood to be in root position, since the bass notes are.

Once you have found something that you like, you can start playing it in a bunch of different keys, and putting melodies above it.

So, by all means, go ahead and learn all 60 7th chords, but find ways to apply your knowledge as you gain it.

Not the answer you're looking for? Browse other questions tagged piano practice or ask your own question.

29
How do you remember your music and how do I improve in this regard?
17
How to memorize seventh chords and inversions on piano?
19
From beginner's perspective, should I polish an easy piece or move quicker to advanced ones?
6
How to practise, ear piano playing after years of sightreading only?
5
Fingerings for root-position Seventh Chords on Piano
0
Learning chords in all keys
8
How to develop intuition for fingering when sight-reading piano music?
4
Is practicing seventh chords ascending/descending chromatically effective?
6
How to bring all fingers down at the same time learning ukelele
4
How can I prevent memorizing patterns/ muscle-memory when learning a piano piece?