Is a minor 6 chord still called that way if the 6 interval is minor?

theory chords chord-theory
Share
Improve this question
edited May 22 at 5:54

The chord symbol for a minor triad with an added minor 6th would be Xm(♭6), where X is the chord root.

This requires that X is truly the root of the chord. Otherwise, as Tim explained, it's an inversion of a maj7 chord.

The main distinction between a m(♭6) chord and an inverted maj7 chord is the point of stability. Given [C E♭ G A♭], if the C is the stable pitch, then the chord is Cm(♭6); if the A♭ is stable, then it's A♭maj7/C. 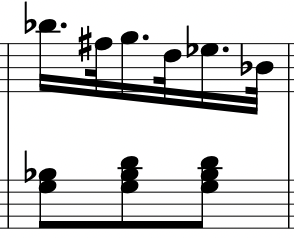 4
What is a Bm chord with a G in it?
2
What is the name of the triad with added 6 built on the 5th degree of the Harmonic minor scale

8
Does the bass note in a "slash" chord really have an associated interval?
8
What is a chord with a diminished third called?
17
Why does a minor sixth chord contain a major 6th interval?
0
Making part of a triad chord sharper, but is it counted as minor?
5
Triads with thirds that aren't major or minor?
3
What do you call a Minor chord on the flatted second?
1
Is there a way to determine the flatness (or sharpness) of the 4th note of a chord from its name?
2
Is it acceptable to use a Maj7♯5sus4 chord? Avoid note/interval clarification