Why do we use such different picks for guitar and oud?

The oud and the guitar are strung similarly (six strings vs. six courses of strings), and are both played with a flat pick; but the guitar pick is much smaller and flatter than the risha used for the oud. Did the different picks for the different instruments evolve by accident, or is the oud somehow better suited to playing with a risha and the guitar better suited to the triangular guitar pick? Could you reasonably play a guitar with a risha, or vice versa?

In terms of playing today, playing with these tools is likely just due to tradition and the timbre of the instrument when played with these tools. The point of the risha sticks out towards the end of the thumb when held in a traditional way, and the guitar plectrum typically sticks out at a right angle to the thumb when held traditionally. These techniques create different sounds when striking a string. See picture 1 (from oudforguitarists) vs picture 2 (from justinguitar): 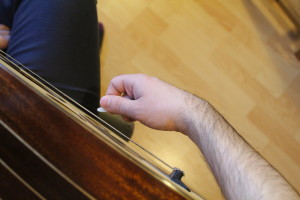 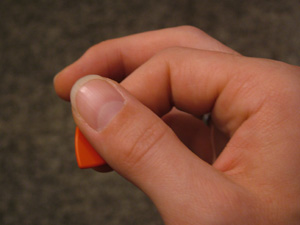 Not the answer you're looking for? Browse other questions tagged guitar technique history oud or ask your own question.

42
Why does conventional playing style give the string manipulation to the left hand?
5
Guitar Strumming and the High E string
4
What types of plastic and manufacturing techniques are used to make guitar picks?
1
Are nylon guitar strings sold in a pack such that only first 3 are nylon, rest steel?
13
I cannot spread my fingers easily. Am I anatomically disadvantaged for playing the guitar?
0
How can I improve my picking accuracy when I'm standing and can't see my guitar strings?
3
Alternate picking speed
1
Do faster tremolos with a pick require developing muscles in the wrist and how long does it take?
3
How to set guitar neck relief for different playing styles