Why are some instruments listed 'in F' or 'in B'?

I am looking through scores of pieces that I particularly like.

I can't understand (as this is the first time I have come across it) why here, in the manuscript, some instruments are named as follows:

X in B or X in F (X representing an instrument).

I have highlighted the sections in the image below. 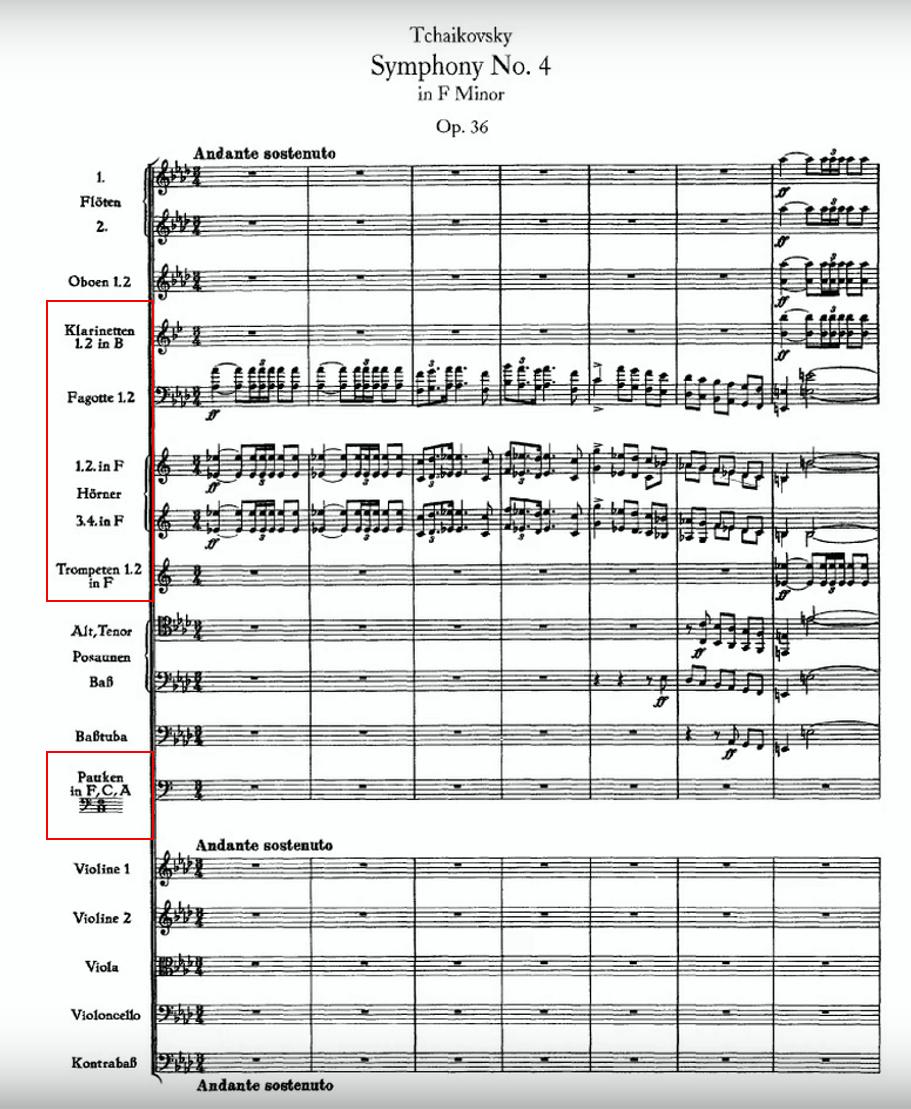 When a transposing instrument plays a written C, it sounds its name.

In other words, when a Horn in F plays a written C, it sounds its name, or F. From this we realize that the Horn in F sounds a perfect fifth lower than it is written. So these horns that start off on a written E♭ are actually sounding the A♭ below it.

The Clarinets in B are actually in B♭. This is because of the German tradition that B is B♭ and H is B♮. But the rule is still the same: when a B♭ Clarinet plays a written C, it sounds a B♭. Since this is a major second lower than written, we know that their written B♭ sounds like an A♭.

So, a little test for you, if you want (put your cursor over the blank answer): if a Trumpet in D plays an E♭, what pitch will it sound like?

When it comes to the timpani (Pauken), each individual drum is just tuned to one of those three pitches. In other words, the head of one drum is stretched such that hitting it produces an F; the other, a C; and the last, an A.

Tympani (kettledrums) are tuned to the notes shown in the score. When sounded, these drums give off this note. Thus one needs only as many drums as are being played rather than one for each potential note.

Some instruments are notated as 'Transposing Instruments' In this score we have Clarinets in Bb (the Germans use 'B' for 'Bb'), Trumpets and Horns in F. That means that when the player reads the note C, the pitch actually played is Bb or F. There are historical and practical reasons for this. https://en.wikipedia.org/wiki/Transposing_instrument

The Timpani (Pauken) instruction 'F, C, A' is a bit different. It indicates that three kettles are required, and they are initially to be tuned to F, C and A. (Timpanists call their drums 'kettles'. It's a nice name, that is worth keeping alive I think.)

For reasons I don't quite understand, all answers up to now refer to transposing instruments, which seems more like a coincidence than the real cause. While it is true, that one could detect the necessary variant of a non-transposing instrument by analyzing the notated range, this requires detailed knowledge and is still error-prone. Note also, that notation conventions are not permanent, so tympani were once notated transposed, but are no longer today.

Stating the instrument tuning is primarily necessary to designate the required variant since there are several to choose from (in clarinet case in descending order of demand: b flat, a and e flat). It is a well-established convention to list everything required on page one of the full score (here also instruments are listed, which don’t have to play anything at the beginning, similar to a cookbook recipe, where all ingredients are also given before the explanation of how to process them), and this is repeated on the single voices for each instrument, so the player prepares accordingly.

Knowledge of the intended variant of the instrument is also helpful for interpretation, which pitch will sound, but beyond the conductor and the players of the respective instrument you will seldom find non-professionals fluently doing it. That technical advances (as with French horn, pedal tympani) now allows quicker switching is a different topic.

Not the answer you're looking for? Browse other questions tagged theory notation key-signatures orchestra transposition or ask your own question.

46
What are the practical reasons for still having transposing instruments?
5
How Common Are the Trumpet in C and Clarinet in A?
5
Key used by clarinet
1
What does the tuning of a brass instrument mean?

4
How are keys in the circle of fifths related?
3
Can I say all black keys are enharmonic equivalents?
9
Did J.S. Bach write the figured bass in scores or continuo parts?
3
Notes grouped under a number
5
E# note in the D# Major scale. What does it mean?
17
Reasoning for redundant "natural" (but not courtesy accidental)
5
Two dots below a note in the Bass Clef
2
Chopin - Étude in A minor, Op.25 No.11 "Winterwind" Pedalling Discrepancies Between Sheet Music and Performances
4
Why is the key signature completely different from the actual notes?