I've noticed a couple of pop songs that use one chord progression that alternates between swapping one chord (either fifth or fourth) with one that's three semitones below it (to third or second):

I was wondering if there was any musical significance behind this. My guess is that I feel the song could be played with one or the other - is the alternation just to add a bit of variety? And if so, is there a name for this technique, and is there any special relationship between the fifth and the third chord, and the fourth and the second chord that makes this possible?

Sometimes a chordal instrument (guitar or piano) will continue to play a chord (e.g. F) whilst the bass descends from F to D. Is this chord now an F/D chord (aka F6) or Dm7? It depends on whether one can hear the bass. Structurally, it doesn't matter very much.

In addition to No'am's nice answer, there are two further points I'd like to make:

When we put it together, we see that this change makes a big adjustment to the harmonic environment, and it's an easy change to make. It's a pretty good payoff for relatively little work!

There are great answers already written, and I'll just add a little more explanation for why this phenomenon exists. In the end, it's a result of the fact that we construct chords from stacked thirds.

How Chords Are Built

Minor chords are the same way. Let's consider an A minor chord. You could continue stacking thirds until you've played almost every note in the scale: A3-C4-E4-G4-B4-D5. (McCoy Tyner uses this voicing on John Coltrane's recording of My Favorite Things.)

The takeaway here: chords are built from stacked thirds.

Let's consider a chord progression like vi-IV-I-V. We can add some variety by changing one of the chords every now and then. Let's choose the IV chord to modify. We achieve the smallest change by replacing the IV chord with a vi chord or a ii chord. In effect, this change entails moving the root note up a third or down a third (respectively). This creates the least amount of change because chords are built from stacked thirds, and hence we preserve much of the original chord. To see this, let's pretend our song is in the key of C major. The IV chord would be FMaj (F-A-C). The two possible substitutions are Dmin (D-F-A) and Amin (A-C-E). Each of these chords shares two common tones with the original FMaj chord: 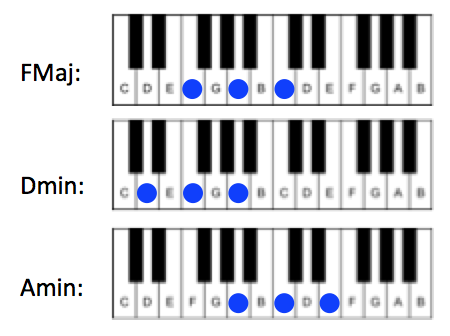 Given the similarities that Dmin and Amin share with Fmaj, these alternate chords are both capable of serving generally the same function as the Fmaj chord. They introduce some variety into the original chord progression without making any dramatic changes to the harmonic structure.

I've described a broader way to approach the substitutions you've noticed. We could use the description I've given to create new examples beyond the ones you've found. That said, No'am Newton is correct to point to relative minor, because every example you've identified is a substitution between the major and relative minor chords.

In the example I created above, FMaj is arguably closer to Dmin than Amin. The reason is that Dmin7 (D-F-A-C) fully contains an FMaj chord, whereas Amin7 does not. Moreover, Dmin contains the root of FMaj, while Amin does not. So Dmin is closer to FMaj and thus makes for an even more seamless substitution.

3
What is "musical significance"?

7
In chord progressions, how can I refer to a chord that's out of the scale?
28
How to create Chord progressions that make sense
4
Chord Progressions Including Majors That Should Be Minors
5
Diminished chord with one raised note
4
What are some commonly used chord progressions in contemporary Musical Theatre styled songs?
6
Are chord progressions based off of one chord used?
0
Why Do So Many Pop Songs Start With The Sixth Chord Nowadays
23
What are the four chords that so many pop songs are based on?
3
Reharmonization of pop songs, chord substitution
3
Is there any significance of key change of 3 semitones in pop songs?