Why are double staff pieces of music not properly aligned for Middle C?

I am a guitar, flute and (a long time ago) bassoon player. I can play a few things on a keyboard, badly, in short: I know how it all works. I'm trying to help teach my wife to play a harp. It has a range from C3 to C6, so when making arrangements for her, it makes sense to use staves with both clefs, like this: 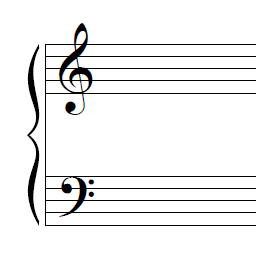 However, I have so much trouble finding music and blank sheets where the clefs are aligned properly. Looking at the above image, if we place middle C in there, it isn't in the middle at all: 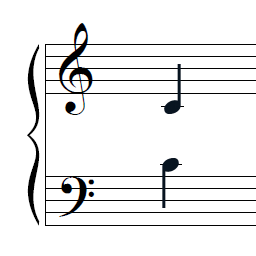 Why isn't more printed work done where the two clefs work together and actually have middle C, well, in the middle? Like this: 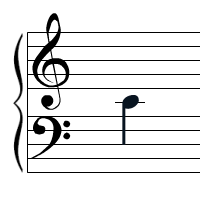 EDIT As everybody so far seems to think that I am only referring to handedness for piano as an issue, this isn't the case. I'm asking about confusing music that doesn't seem to have anything to do with what hand you use (this could be played with one hand on a harp without much difficulty), such as:

As you can see here: Roberto Di Marino - Celtic Suite - Flute and Harp

Unless because it's done that way on piano, so that's why and no other reason.

Relative to the Grand Staff, it's important to think of "Middle C" as a concept more than a literal visual expression. Here's why:

At first glance, you might think, "that's not so bad". However, once you add music, especially complicated music, this type of notation can be quite unwieldy.

So it's split into what we commonly see as the Grand Staff, which, as others have mentioned, usually relegates a hand to each staff. So, we've solved a visual problem by separating the staves with some space. But now we have another problem: what if we want to know how loud / soft to play the music?

Well, putting the dynamics on the outside of the Grand Staff is visually distracting and cumbersome:

It is more difficult for the musician to read the music and the dynamics this way.

However, keeping dynamics and other indications between staves – for the most part – can help reduce visual clutter and lead to better reading / performance.

So, let's go back to the question: 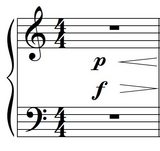 **Why isn't more printed work done where the two clefs work together and actually have middle C, well, in the middle? **

In order for the staves to be exactly aligned, you'll need to sacrifice other important visual, performative, and logistical elements in the music. Using ledger lines helps us cope with this off-set. For publishers, composers, and performers, the staff spacing relative to middle C just isn't that important.

Because the the bigger point behind the grand staff for piano is to have one for each hand rather than show an absolute note position on the instrument.

It's not too uncommon to see two treble or two bass clefs in the grand staff. For example the way Imagine by John Lennon is notated for piano using two bass clefs.

There are also other modifiers that can make the top or bottom staff different like octave clefs, ottava alta marks, and ottava bassa marks.

It's useful to teach the grand staff the way you mentioned, but in practice when playing keeping them their own systems is important.

The top staff is for the right hand, and the bottom staff is for the left hand. As Dom says, you could have two treble or two bass clefs, but even with one of each as pictured, there would be severe problems with having the staffs this close. It's common for the left hand notes to go several ledger lines above the staff, or for the right hand notes to go below. We need the space to see this.

Using multiple staves is meant to separate multiple logical voices, or parts, within the music. Consider that there may be more than two voices for a given piece of music (SATB is an example; soprano, alto, tenor, and bass).

People have mentioned that one staff is for the left hand and one is for the right - but this is an oversimplification which leads to questions like the ones you asked. When you think of music in terms of more than two voices, the idea of aligning the staves becomes more difficult to implement.

Another thought - A Grand Staff is two individual and different staves joined - a treble staff and a bass staff. There is no need for alignment because a Grand Staff is not a single thing - it is and remains two separate things. As long as the leger line for treble middle C is below the staff at a staff lines distance and the bass middle c is above the bass staff at a staff lines distance - then the correct spacing is being observed. As well as the other comments about multiple leger lines and handedness, expression marks etc needed to have space to operate.

As far as finding staves printed as you would like, they probably don't exist. However, it is quite easy to make up some of your own, as in your third example. Once one sheet is prepared, it's simple to copy others off. That would then be easy to play harp music from. You'd probably end up writing out by hand, but that's pretty well what I do for drum music for students, and isn't particularly onerous. Or come up with something like an alto clef, putting a middle note from the harp at a convenient place on a single staff - like several other instruments have done.

12
Why are some measures separated by double lines?
4
Are there limits for the possible pieces for different violins?
12
Are there unicode characters for double sharp and double flat?
3
Why are ledger lines (lines below or above the staff) used in writing music?
5
How to properly notate scales that are not heptatonic
16
Why are accidentals not additive?
0
Why are the many instruments notes are not in order?
1
Why are western double-reed instruments smoother than double-reed instruments outside Europe?
7
Why are some notes double stemmed in keyboard style harmony while others are not?