What scale degrees form the most-used chords in a minor tonality?

We know that for songs written in a major tonality, the I, IV, V chords are the most used. The II chord is used often, the III and VI chords a slightly less often, and you almost never see the VII chord.

Are there similar trends found in the chords used in songs having minor tonality?

In minor keys, most of the time i, iv, and V (often V7) are used. As for other scale degrees, you often see VI, but the other scale degrees aren't seen as often. ii¬∞ and vii¬∞ are diminished and need special resolution to sound good, while III+ is augmented and hard to fit in anywhere.

Here is an image of triads built on the various scale degrees (remember that the harmonic minor is used most commonly): 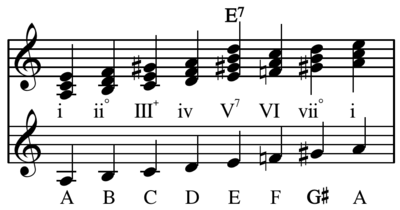 Not the answer you're looking for? Browse other questions tagged theory scales harmony or ask your own question.

6
Finding out which scales contain a specific chord
4
"I-vi" in Major or "III-i" in Minor?
6
Chord progression if the chords are not part of the scale?
1
Are the iv and V chords used in the minor scale just like the major scale?
3
What are the primary (or most common) chords of the minor scale?
3
Is the melodic minor scale use as the basis of chord progressions in modern jazz?
1
In A natural minor what are the tonic and sub dominant family chords?
3
Beethoven Piano Sonata no. 1 in F minor: What are the first 2 chords of the transition?