Does an implied tie exist

Is there such a thing as an implied tie? Like some kind of symbol or notation that would specify to hold a note through the duration of all the notes on a pitch as if they were tied together.

Edit: I am asking because I am wondering if there is a way to specify that instruments hold one tone (like a choir that is humming) instead of playing each note separately. The reason I am wondering is because I am using a notation program to write out some music, and then you can listen to it, and I want to hear it like a choir humming. I know about ties, but I just thought I'd check if there is such a thing in music.

Edit: By implied, I mean it isn't written in the music. In other words it is specified at the beginning of the part or something like that.

Edit: I am using Noteworthy Composer.

If you want a long, sustained note, you could notate it in quite a few different ways. Below are some suggestions. Not all will actually save you time, by cutting notation, though! Each of these is only five bars long, so, obviously, you would only get any time benefit from using these techniques with longer notes.

BTW, I haven't used Noteworthy Composer before, so have no idea if they would work with that software. I used Sibelius7 for these, and all played back exactly the same (apart from the second line), i.e. with one sustained note per bar. 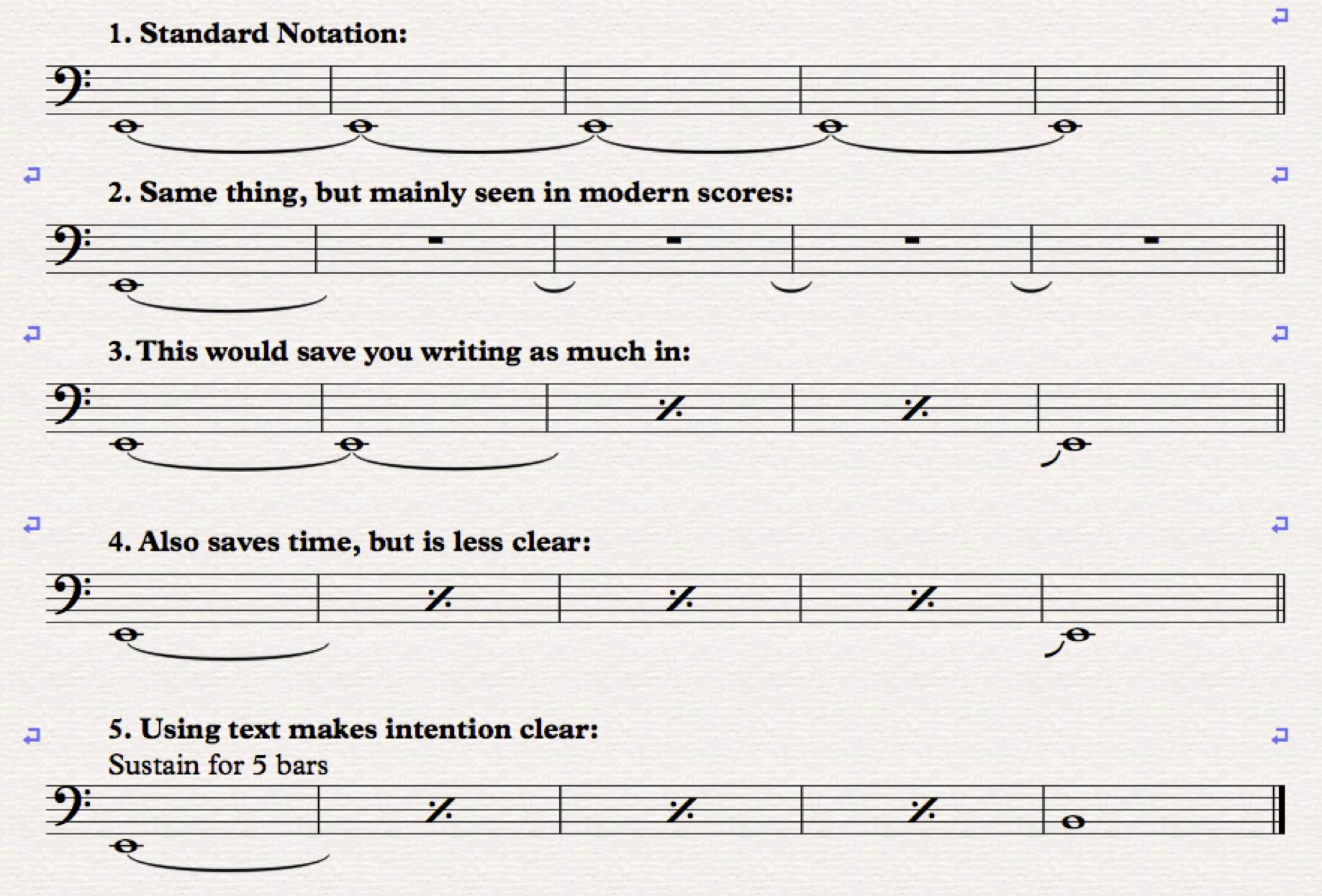 With this answer I've tried to show different kinds of notation for sustained notes that would be valid within a score. Not all of them would save time if all you actually want is to hear the music (or to create a MIDI file of it, for instance). If all you want is to create a long held pitch, as quickly and easily as possible, the notation below will create the necessary effect (well, again, it works in Sibelius7, but might not in other software). But it is certainly not correct notation!

As I understand your question, no there is not. A tie is always written out with a curved line connecting two or more notes of the same pitch.

The only thing that I can think of that comes close is a dotted note. However, a dotted note is viewed as one note, not multiple notes tied together.

It depends on the instrument. The abbreviation "l.v." is used. It stands for "lasciare vibrare" in Italian, or "let vibrate" or as luser droog says, "let ring". It is used for percussion instruments like the tam-tam and timpani, and also for harp and similar instruments.

Your best bet is to just write instructions at the beginning telling the musician what to do.

In guitar music you occasionally find the remark "Let Ring." This means tones are held as long as possible, until that finger is required elsewhere. A somewhat similar effect is produced by holding the sostenuto pedal on a piano.

[Perhaps my terminology implies more expertise than I actually possess. I learned on an antique player-piano with the player mechanism discarded. It had a pedal that moved all the hammers closer to the strings thus curbing the range of accelleration, the 'piano' pedal. And it had a pedal to raise all the dampers so every tone rang until it had diminished below the threshold of perception. It is this pedal that I mean by 'sostenuto'. To use it musically, you have to clear the memory while sounding a new chord, so as to have no gap in the sound. There are some fancy "modern" pianos that can sustain only the notes currently being played, allowing staccatto on the other keys. The player-pianos of yore did not have this ability.]

While the staff notation would be no different than not doing this, it does seem to require explicit instructions (e.g., "Hold pedal until a chord can hide the pedal change."). Instructing software to do this would be somewhat different than instructing musicians.

Could you be talking about like Gregorian Chant kind of stuff? AFIK, Gregorian Chant is distinguished in notation by having only four lines, with or without a clef, which may be any letter a-h ("No B♭, that's a Bad B♭!").

Older than that is notation based on 'neumes' which I never really understood. But neume comes from 'pneuma', greek for spirit or breath; so with both of these, the notes comprising one word of the text are to be sung as if tied together.

For software, I'd search for something with a Chant mode, or a plugin or something. This has got to be already-explored territory. 2¢

Not the answer you're looking for? Browse other questions tagged notation terminology rhythm or ask your own question.

4
Guitar notes: rest vs tie
9
How can I typeset a break or jump in my scores?
9
Are there any situations when one needs to make a distinction between slurs and ties?
7
Does the existence of a chord tone (and its enharmonic spellings) imply the absence of another?
7
Why are time signatures not used in this score?
3
Confusing rhythms/tuplets in Le Sacre du Printemps?
4
Ties vs voices for notes of different length
3
When to use tied notes vs. an unconnected “laissez vibrer” (l.v.) tie?
10
What is the symbol for “is the enharmonic equivalent of”?
0
Adjusting the BPM for an odd rhythm (to render a MIDI)