Context: My theory book is elaborating on some rules for melodic motion to be applied to the soprano voice when Writing in Four Parts.

In the screenshot below, I'm trying to digest the quote:

Two leaps of 4ths are usually poor, but arpeggiation of a dominant 7th can be effective.

Question: Are these two statements intended to be read in contrast to one another? I'm trying to imagine a scenario where a dominant 7th chord could be arpeggiated by two consecutive leaps of a 4th, but can't see it happening.

Maybe these are simply two independent rules which are joined with the word "but"? I'm just seeking clarification on which interpretation is correct. 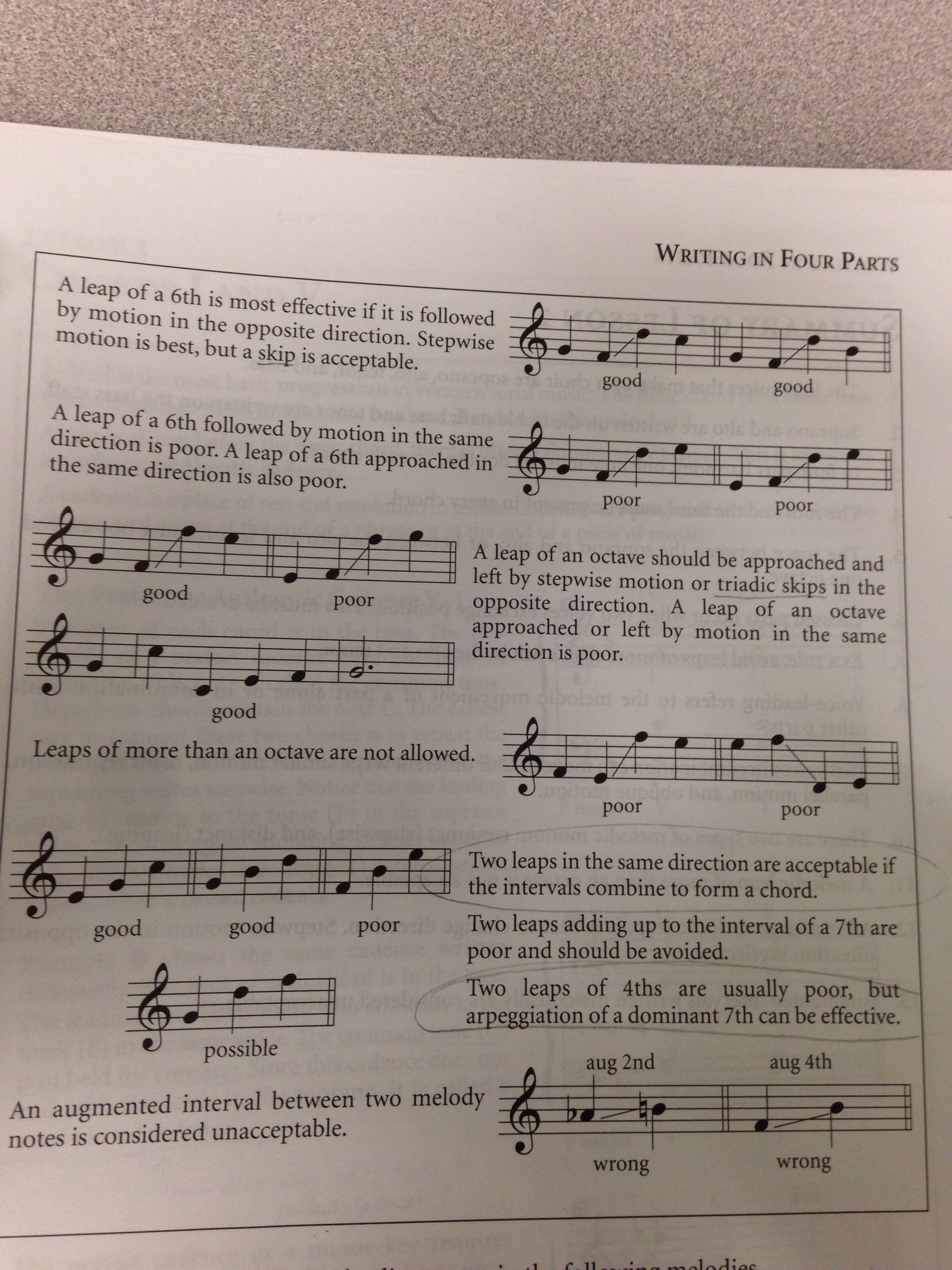 The two rules are meant to contrast each other. Two consecutive leaps of a (perfect) 4th combine to span a minor 7th--the same 7th interval as the one a dominant 7th chord uses.

An example of two consecutive leaps of a (perfect) 4th: F - Bb - Eb

Note how both examples begin and end with the same notes.

Mathematically, there are only two ways to have two leaps in the same direction that span a 7th: two ascending fourths or a combination of a fifth and third.

In traditional part writing, two consecutive leaps of a fourth will sound out of place because they don't form a chord. Consecutive leaps of a third and a fifth (or a fifth and a third) can be effective in certain cases, most often outlining the dominant 7th chord. Remember that the dominant chord has a special place harmonically as the chord of highest tension, so it can be made to stand out more than other chords.

Not the answer you're looking for? Browse other questions tagged theory voice-leading or ask your own question.

17
Circle of fourths in Jazz
3
Does the rule regarding consecutive octaves/fifths actually hold any weight?
3
Voice leading/resolution of consecutive secondary dominant 7ths
1
Melodic Minor Modes
5
Is contrary motion a requirement when approaching a cadence?
0
Why do we harmonize the melodic minor scale if it was created for melodic purposes?
5
Are consecutive 3rds allowed in harmony?
2
Why are these double notes labeled 'contrary motion'?
3
Is there a rule in SATB writing regarding the Soprano & Bass moving in contrary motion?
0
Harmonic/Melodic Modes