Some measures have extra whole notes in them. What do they mean? [duplicate]

Ask Question
Asked 4 years ago
Active 4 years ago
Viewed 732 times
1
This question already has answers here:
Rest above a note in a piano piece (4 answers)
Closed 4 years ago. 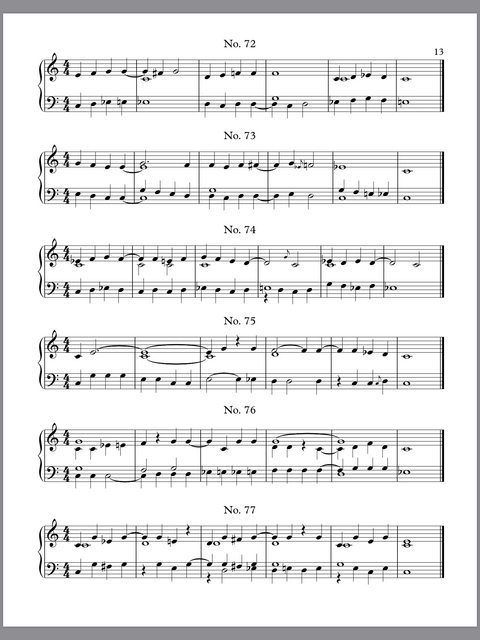 So i am practicing sight reading and i came across these exercises that have extra whole notes in a measure. What do they mean and how do i play them?

It's hard to tell in the measures with just whole notes, but you're being given two separate voices to play. You'd play them at the same time.

No. 74 is probably the best example to use to explain. Notice how the right hand has a series of quarter notes with the stems up and a whole note followed by two half notes with their stems down? The quarter notes are the upper voice, the whole and the half are the lower voice.

Also, do you notice how they line up vertically? The whole note has 4 quarters above it, while each half has two above it? That illustrates how they line up rhythmically and should be played at the same time.

These are exercises to teach you how to play passages with some of your fingers while holding a note down with another one. Looking at the first one (No. 72), second measure, you need to play the C while holding the G down (tied in from the previous measure), and then play the F# and G while holding the C down.

A little more involved example will give you an idea of where this is going, and why the exercises are there. Here's a snippet from one of Bach's fugues: 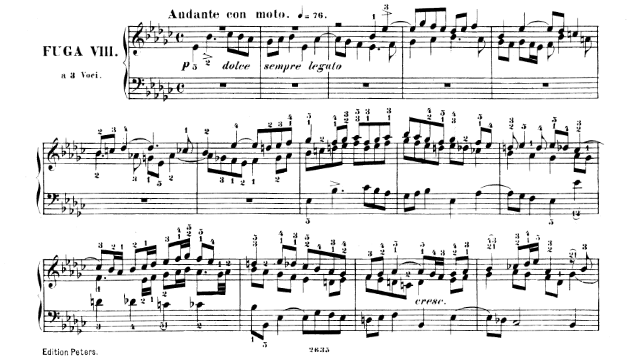 You will notice the first two bars have whole rests on top of notes. (How can this be? You're either playing or you aren't, right?)

This is a fugue with three voices. You can think of it as a mashup of three different parts written on three different pages. The top voice doesn't begin until the second half of bar 3 -- note the two whole rests and the half rest on the F line before the two quarter notes. (Some scores omit whole rests in voices that are silent for an entire bar, if there are other notes in the same clef.)

To see just how complex Bach's counterpoint (multiple-voice music) can get, I'll include this performance of a six-voice fugue from A Musical Offering. (The story goes that a king gave Bach the theme and challenged him to write a fugue with six voices. Most of his fugues have three or four.) You'll notice that when all six voices are running, he adds a third staff to keep things from getting too cluttered. (This is also a fairly common practice. The goal in score writing is to make things as easy as possible to read.)

As Lao Tzu says, a journey of a thousand li begins with a single step. Enjoy!

Not the answer you're looking for? Browse other questions tagged piano practice sight-reading or ask your own question.

31
Rest above a note in a piano piece
5
How should i play this 4/4 measure with 4 quarter notes and 1 whole note in it
2
Help with same note next to each other but different values?
3
Too many notes in this measure