When to release piano sustain pedal

I just recently upgraded to a digital piano with sustain pedal and am trying to learn this song at the moment: https://musescore.com/carlosgbrozatti/jhin

If I have to release the pedal after every bar, how would I play this: 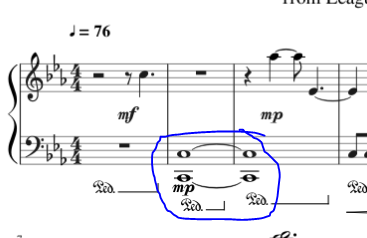 Anyone mind helping me out, havent found anything useful in the search results of music.stackexchange

Seems totally pointless releasing and grabbing again. That means holding down the l.h., which is effectively why we have the sustain pedal. In this music, I say it's not written well. Normally the pedal is released as you play the next part, which is then grabbed again before taking the hand/s off. Re-pedalling that part is like a broken pencil. Pointless.