Ending of Ballade in G Minor 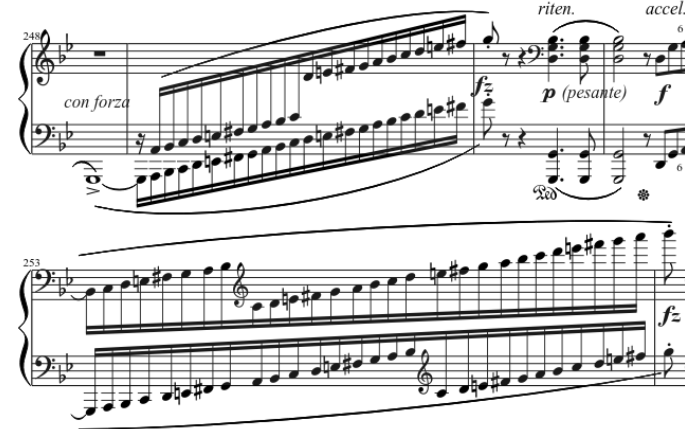 I'm currently working on Chopin's Ballade in G Minor and have come across a problem I can't work on. The two sets of scales shown below are meant to be played rapidly. However, whenever I try this, my right and left play out of sync and ends up sounding really muddy. I've tried playing slowly with a metronome but hasn't helped me reached the speed I want it to. Any suggestions?

First, those scales need to run pretty quickly, it is true. Are you able to play any scales at, say, 144? Probably not. You have to work at them. And, all the while you're working on them, it often seems like you're not making any progress. But then one day you sit down and run one off, and it suddenly sounds a bit better than it did just the day before.

I suggest that you practice your G melodic minor scale, both in octaves and in tenths, four octaves. Make sure that you don't allow yourself to let the hands get uneven. Work on it very slowly (start with, say, one note per second or 60 on the metronome, and two octaves is ok to begin with), note by note, making sure that each hand hits at exactly the same time. As you get the evenness, the speeding up will happen naturally on its own.

If you aren't finding that to be the case, then it's most likely because you aren't being rigorous enough with yourself in paying attention to that evenness. Probably because you are letting your right hand tantalize you a bit, because, you know, it plays so much better than your left (if you're left-handed, then the opposite is true of course), and so is so much closer to what you want.

One of my teachers once told me that he spends three times as much time working on his left hand as he does with his right. Your right hand has to slow down and give your left hand a chance to keep up with it. Don't let yourself become impatient; a way to not make progress is to keep going over things wrong. If you do that, don't expect things to improve; you're just teaching your hands how to play things wrong. Then you have to un-teach them, and that's much tougher than teaching them right in the first place.

If you don't work out the problems with the evenness, they will magnify exponentially as you attempt to speed up the scale. So work on it.

The next thing is that if you can't play your scales evenly, you are having problems with most of the rest of the piece as well. Don't obsess over one detail or another and gimp your way through the "parts that you're putting off until later." If you're practicing in problems, you'll have to unlearn them. So be rigorous with your approach. Don't let details go.

Above all, be patient. And don't feel like a failure if you decide to put this aside for a while (you'll have improved your G melodic minor scale, after all) and work on some less difficult Chopin music. (Mazurkas!) It's a way of breaking up problems into smaller bites. Every piece you learn well contains keys to mastering more difficult pieces.

p.s. In case you couldn't tell, I did all the things I'm telling you not to do, slopping my way through this very piece until nobody could stand to listen to me practice it any more.

When I'm practising hard passages like this, I have a 'practice toolbox' which I find very useful. This includes:

Slow practice - as numerous others have said, preferably with a metronome. But slow practice alone will not help you get the speed up.

Rhythms - really surprised nobody mentioned this! Maybe triplets then a long note, short-short-long-long, dotted rhythm, whatever suits you and whatever fits. Again with a metronome if possible.

Every week, you might want to increase the speed a little, and gradually you will find it super easy to play!

Of course, you don't have to isolate all of these things- you can play staccato rhythms slowly and things like that. The reason that these techniques work is because they force your brain to subconsciously think a lot harder about the passage than it normally would when taking it at face value- it's like playing practice games! A change of 'mindset' might also be useful- instead of looking at the passage like it is, see it as a scale (which you might find less scary).

Not the answer you're looking for? Browse other questions tagged piano scales or ask your own question.

0
Why does minor scale and minor chord differ in degrees?
1
Ballade in G Minor
11
minor tetratonic scales
12
What is the historic origin of the terms & textbook definitions of the natural minor, harmonic minor, & melodic minor scales?
5
Playing a trill with grace note ending
1
Ending a measure in “and!”
7
Melodic minor scale
3
Does a melody ending on the 6th degree mean that the section of a song is in aeolian mode?