How to rewire my cabinet properly

You've read up on impedance mismatching and figured you'd rather save yourself the grief and inevitable heartache when it all goes wrong and one of the amps goes kablooey. So, you have a genius idea to rewire your cab to have 2 inputs, one 16 Ohm and one 4 Ohm. You know this can be done as both speakers are rated at 8 Ohms.

How would you go about rewiring this cabinet?

TLDR; cab has two inputs, both mono, two 8 Ohm speakers wired in series. How can I turn it into a cab with one input at 16 Ohms and one input at 4 Ohms.

To clarify, I am not using both amps at the same time. I want one switch or input to be 4 Ohms and the other to be 16 Ohms. Specifically, I am looking for ways to wire this up, with or without a switch (preferably without).

First, a caution: This is wiring for higher power levels than hobbyists normally work at. You should find that speaker cables are thick and have thicker bundles of strands which are harder to solder than normal line level or guitar level cables. A lot of times, a normal soldering iron isn't enough to effectively solder large wires and to larger lugs. I had to get a higher powered solder gun with a larger tip than a normal electronics iron in order to effectively solder speaker connections.

The risk of bad soldering in this project extends all the way to possible damage of your amps. If something shorts or a solder joint goes cold, you could overload or unload the amp and that can put damaging stress on the output transformer. I recommend you consider the fact that you had to ask for advice on this project as a signal that you might not be ready to DIY something that could damage some nice amps that you are "proud" to own.

This is theoretically possible but unlikely to work in practice. I was able to draw up a wiring diagram where the wiring is automatically switched based on which jack you plug into (lower left corner of the image). In order to do that, I had to draw it with two 1/4" TRS jacks that had both tip and ring switched. So great, right? The problem is in practice I've never seen switched TRS jacks that are built for speaker level signals. They may be out there, but it might be a pain to find them. I think one reason why they probably don't exist is that the contact surfaced inside the jacks for switching purposes are just too small to handle the kind of current you want to be ready for in a speaker cabinet.

Option 2: One jack with a switch that changes from 16 Ohm to 4 Ohm

I think this is the way you'll want to go, assuming you can find a high current DPDT switch (pretty sure DPDT is enough). If you look at the lower right hand diagram in the image below, that's my suggestion for wiring up an impedance changing switch.

The + and - shapes on the right side represent the positive and negative terminals of each speaker. Obviously the polarity of the speakers is critical for this project, so make sure you know which is + and which is - for each speaker.

Make sure you get a DPDT switch that has large enough lugs to handle the speaker cabling (I hope and expect they exist), and look for ones that have a rated power or current capacity that is sufficient. Also you might look at a rotary style DPTP switch, since that way you can use the existing hole in the connection plate of the cabinet. Just remove one of the speaker jacks and put the switch in its place. Use an office label maker to label the switch positions.

Below I've shown my whole thought process, so you can do this kind of thing for yourself next time, perhaps. When I'm trying to figure out a switch, the first thing I do is draw the two states I want to switch between without the switch. Then I try drawing the switch using the two states for reference.

The first thing to look for is what doesn't change between the two states. In this case, the positive terminal of one speaker is always wired to the tip of the jack, and the negative terminal of the other speaker is always wired to the sleeve. So with the switched diagram, the first thing I do is draw those connections, since the switch won't change them.

Then I assume the switch is in one position and try to draw that out. Then I try to draw the other position without changing the wiring for the first position. Sometimes I have to do a couple revisions. At this point I'm pretty good at DPDT switches so I can get it on the first try most of the time. 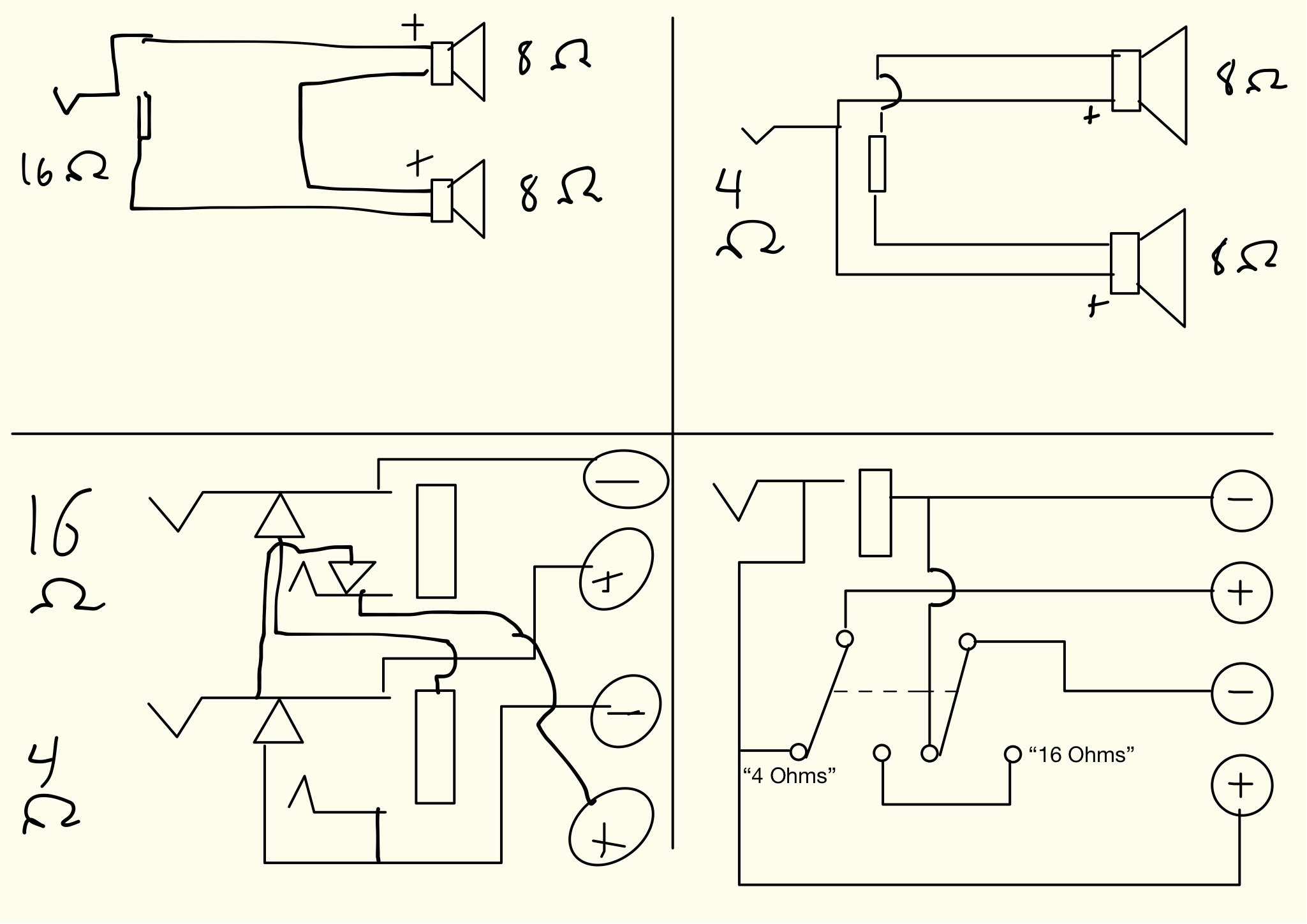 Two 8 ohm speakers wired in parallel will present 4 ohms to the amplifier. Wired in series they will present 16 ohms. So if the speaker is 16 ohms, I think you've got your series and parallel mixed up! Maybe you were confused by the spec. which states '2 X PARALLEL ¼” INPUT JACKS FOR ‘DAISY-CHAINING TO ANOTHER 16 OHM CABINET'. It's the inputs that are in parallel, not the speakers.

Yes, what you suggest is theoretically possible. But it would involve some fairly complicated wiring and switching, and I really wouldn't bother. Use the 16 ohm output on the amp that's got one, the 8 ohm on the other. The amps will be fine.

You ARE talking about using one amp OR the other, not both at once, I hope? Don't do that. Though I suppose it MIGHT be interesting to wire one input socket direstly to one driver, one to the other, completely isolated, and use both amps, maybe with different effects? A rudimentary stereo system.

I'm hoping you want to use the cab with either/or amp, not both simultaneously!

Given that assumption, one socket on the cab will wire the speakers parallel, giving 4 ohms; the other will be series, giving 16ohms.You might consider switched sockets, which when you plug into, would disconnect the 'wrong' circuit.

Label them clearly, and all will be well. Not a good idea to run both amps through the same cab - unless you use each one for each amp. At 8 ohms, speakers totally separate from each other, there's not a problem.

Not the answer you're looking for? Browse other questions tagged amplifiers speakers or ask your own question.

1
2 Heads on one Cab?
0
Ohm ratings for guitar amp / extension cab
3
Chaining amplifiers together
0
Speaker impedance connected in parallel for the power mixer
0
Are stereo speakers suitable substitutes for studio/rehearsal monitor? What amps/preapms are required?
1
Blown (?) speaker, or swapped poles?
0
connect two keyboards to speaker and possibly computer sometimes
0
Splitting a 4x12 to two 2x12s
0
Connect an electronic drum kit to a powered speaker
2
5 watt tube Amp has 2 8ohms outputs and I have 2 1x16ohm speakers. Can I connect them together?