How many chords exist in total? [closed]

How many would there be in total for two hands (piano) if not take very complex large chords that would require more than 5 fingers on each hand? Okay, and probably not more than 10 keys.

Maybe there is a diagram of all those chords?

Edit: A chord is more than 1 note. So G5 counts. Inversions don't count.

It's difficult to say. A particular set of notes can conceivably be called by many different names. By your rules, and following the generally accepted conventions of chord symbol rules, what would we call D♯ and F played together? If we respelled F as E♯, it could be called D♯(sus2omit5) or D♯(add9omit3,5). Do those count separately?

I could go on, but what I can't do is think of a properly named chord that has just D♯ and F in it. Yet, how can anyone say those two notes can't be sounded together? You see the problem?

So if a chord is defined as 2 to 10 unique pitch classes and inversions don't count, there would still be additional things to take into consideration, and counting the combinations is way more than simple math. You need to consider the compatibility of each interval. You can't, for example, have a diminished 5th and an augmented fourth in the same chord, can you? That's the same note. But let's say we define a chord as a root plus one or more of the following intervals:

...you would come up with 46655 chords for each root note. But before you go multiplying that by every root, you'd have to eliminate chords which don't make sense. A minor third with an augmented fifth is really just a different major chord, so let's reject those. You wouldn't want something like a Csus2add9 chord, because that's duplicating a pitch class that's already in the chord. You wouldn't want something like Cadd♯9omit3 because that ♯9 is better identified as a minor third. So, if you take away everything that doesn't make sense, you're down to 7637 possibilities, by my count. Many of these are enharmonic, but should still count separately. For example, C+7add♯4 and C7♭5add♭6 are different by interval, but the same by piano keys depressed.

This is an interesting theoretical question. I wrote an algorithm to explore the possibilities and I asked a few questions here to help me do it. (See this, this, and this if you're interested.) You can check out the fruits of my labor here:

The theoretical maximum is 12, because then you choose all notes and there's nothing to add. The number you get there is 1302061332 chords.

However, this is meaningless combinatorics, so to say.

How many would there be in total for two hands (piano) if not take very complex large chords that would require more than 5 fingers on each hand? Okay, and probably not more than 10 keys.

It seems to me that these two statements contradict each other. If you ignore voicings, doublings, and inversions, then all we're doing is labeling any subset of the chromatic scale as a chord, and I doubt that there are any such subsets that can't be pretty easily fingered on the piano with two hands in a close voicing. For example, there is only one 12-note chord, which consists of all the notes of the chromatic scale. Hitting all those notes simultaneously on a piano keyboard is actually pretty easy.

The number gets quite a bit smaller if you want to count only chord types. For example, you could say you don't want to distinguish a C triad from a C# triad. The count gets roughly 12 times smaller if you do this, but not exactly 12 times because some chords are symmetrical, e.g., Cdim7 is the same as F#dim7.

I actually answered a question similar to this awhile back here. The question was concerning scales, but since I calculated the amount of scales with all length of scales that includes any combination of notes that could also be considered a chord. Note that these were all calculated based on 12 tone, equal temperament and were only in a one octave range.

For instance, with Tritonic (3 note) scales there are 220 unique versions with 55 of those being unique modes. If you don't want to count inversions there are even less than that. Personally I think inversions sound distinct enough to be their own chords, but things like semitone clusters will definitely sound the same.

Here's a Google Spreadsheet I did on it. Any other style of chord you could possibly want is in there. 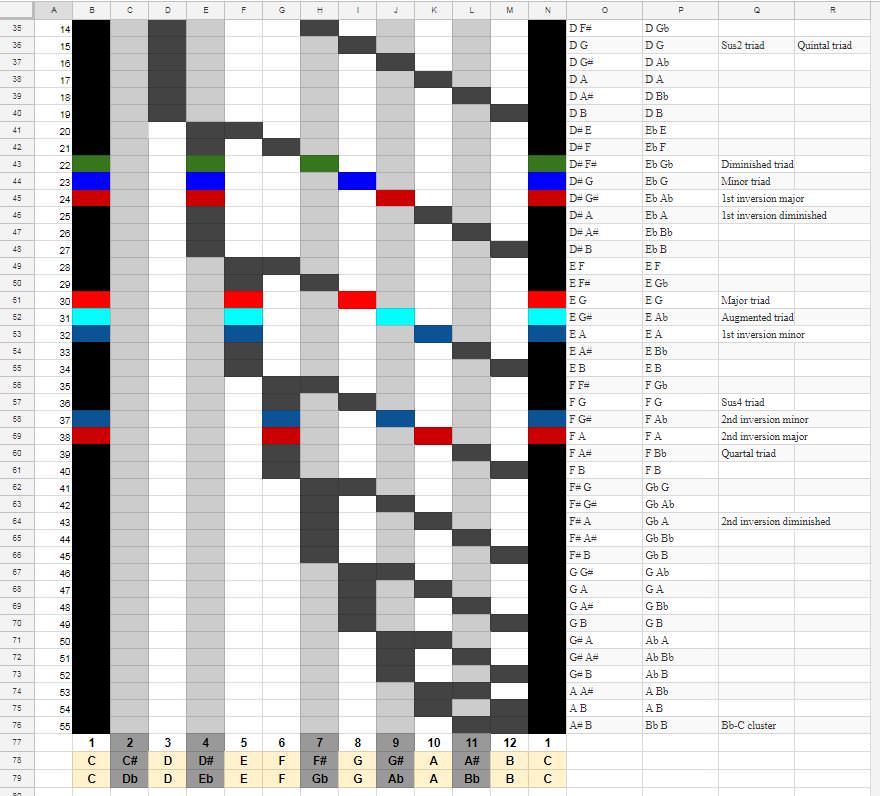 17
Why is a ♭5 chord not a “triad”?
12
When a major 6th (or an octave thereof) is in a chord, when is the chord symbol written as a 6th vs. a 13th?
3
What implications do the formal rules of inversions have for suspended chords?
1
(“Natural”?) Scales… How many are possible, etc

18
How to memorize seventh chords and inversions on piano?
16
Scale modification in sus2 and sus4 chords
23
Chord naming conventions: add2 versus add9
10
Barre chords kill my thumb!
1
What are the key chords I need to know and how do I recognise them?
5
Triads with thirds that aren't major or minor?
8
Is 'fundamental frequency' the same thing as 'fundamental bass' (chord root?)
2
Fingers touch adjacent strings while playing chords
5
Inversions of chords in closed/open positions
2
Is there a naming convention for open chords?