Could someone help me figure out what kind of electric bass this is? I found it in my great-grandparent's attic. There is not a single word on this thing anywhere, and I can't find a similar model via photo.

On an additional note, a recommendation of strings I should use to replace the old ones?

I apologize in advance for poor photo quality: 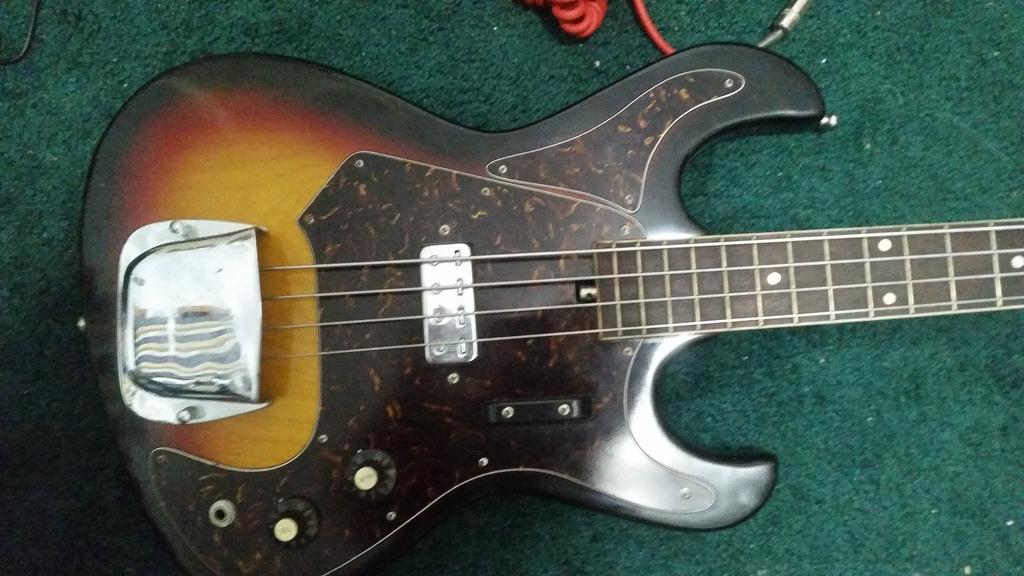 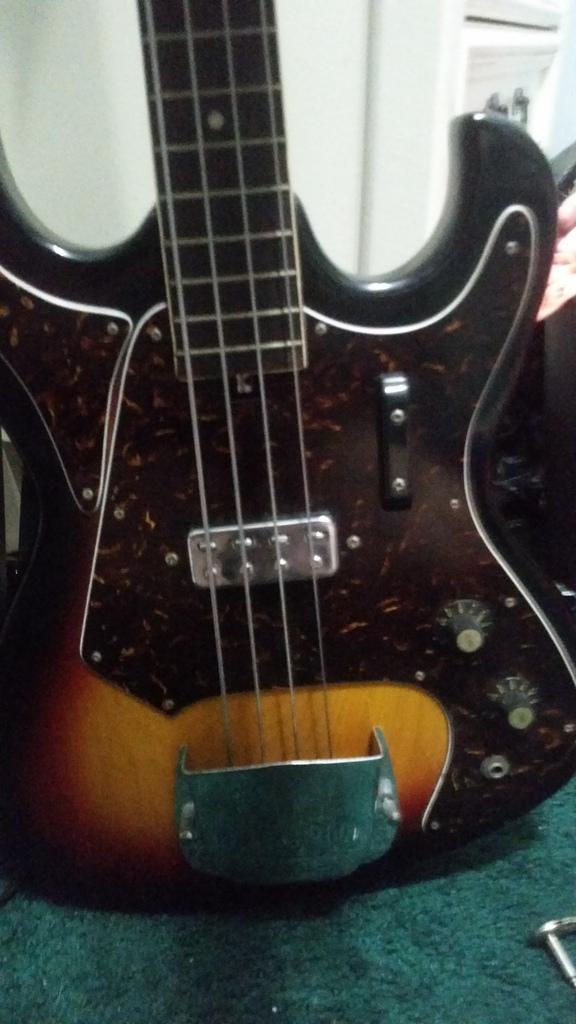 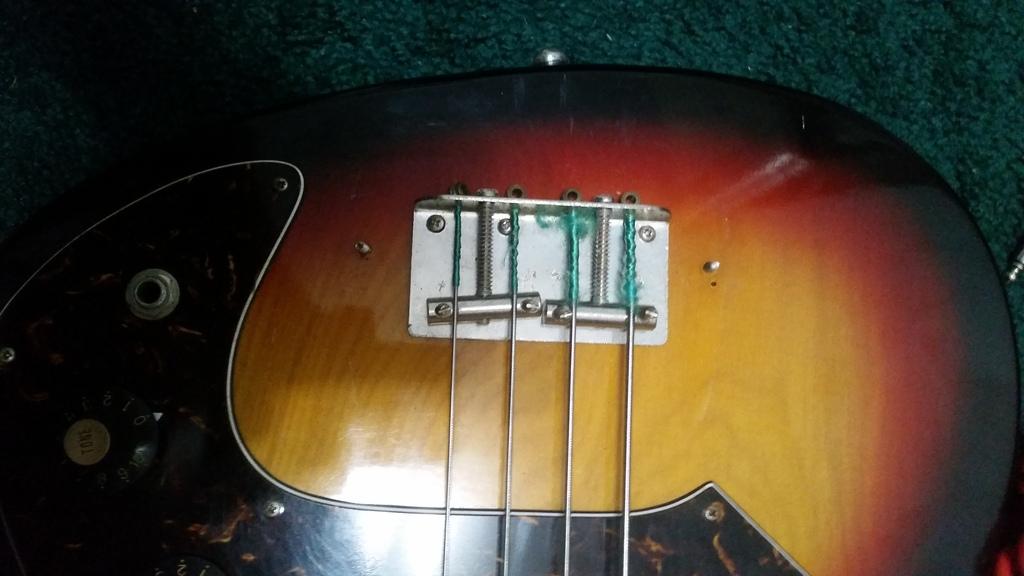 Your instrument appears to be a 'Top Twenty' Bass that was made in Japan. It is possibly a 60/70's but can't be sure. The pick up on the bass is a Hofner staple pick-up so that would er towards 60's. I have a similar bass with the same pick-up.

It's a 60/70's Japanese Fender knock-off of some sort. (That's back in the days when Japanese stuff was cheap and junky.) It's made of various cheap parts that don't really match each other.

There were many names stuck onto those products- often the same instrument with different names, or vice versa. Without a name on it, it may be impossible to accurately identify it. (Perhaps some mad collector or dealer or expert in old instruments could nail it for you, if you could find someone like that.) At that time, teenagers were becoming very interested in music, due to the Beatlemania, then Woodstock, etc, so the markets were flooded with such instruments - low priced knock-offs of expensive American instruments (in this case the Fender Jazz Bass) that targeted the young market with prices that were fraction of the cost of a "thoroughbred".

In the USA, such an instrument probably cost around $79.95 in Sears, in 1970. Now it might be worth 3x or 4x as much, assuming it's in good playing condition. (That's after taking inflation into account...) Judging from the pics, it doesn't look bad at all. Highly doubtful you've stumbled upon some buried treasure.

Take a look here - you might find something similar - I didn't right now but the list is always changing: Vintage basses under $1000 - note that the basses for sale there are mostly in excellent condition, with known names.

Among the listings there is this :Gallan Jb Circa 1969 3ts 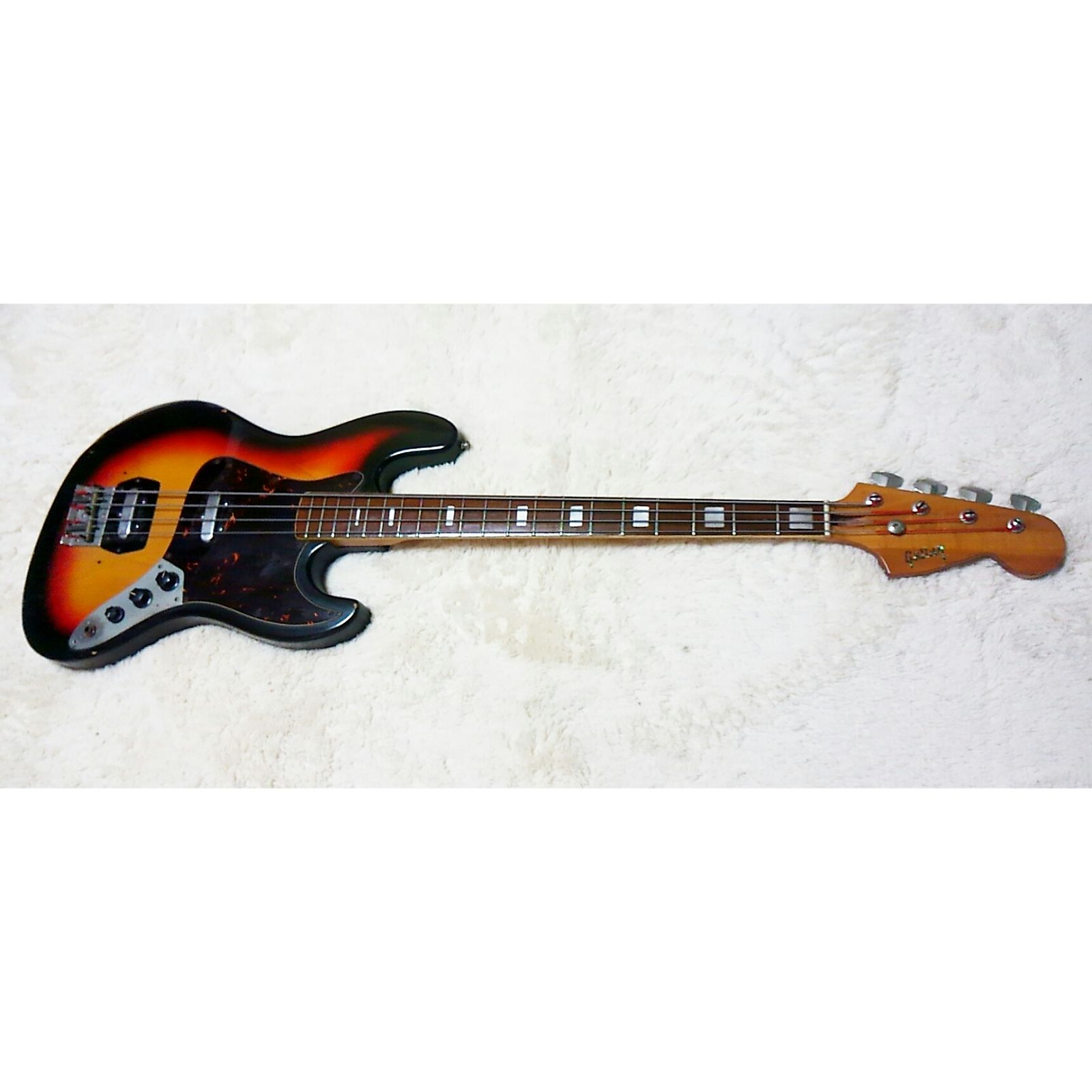 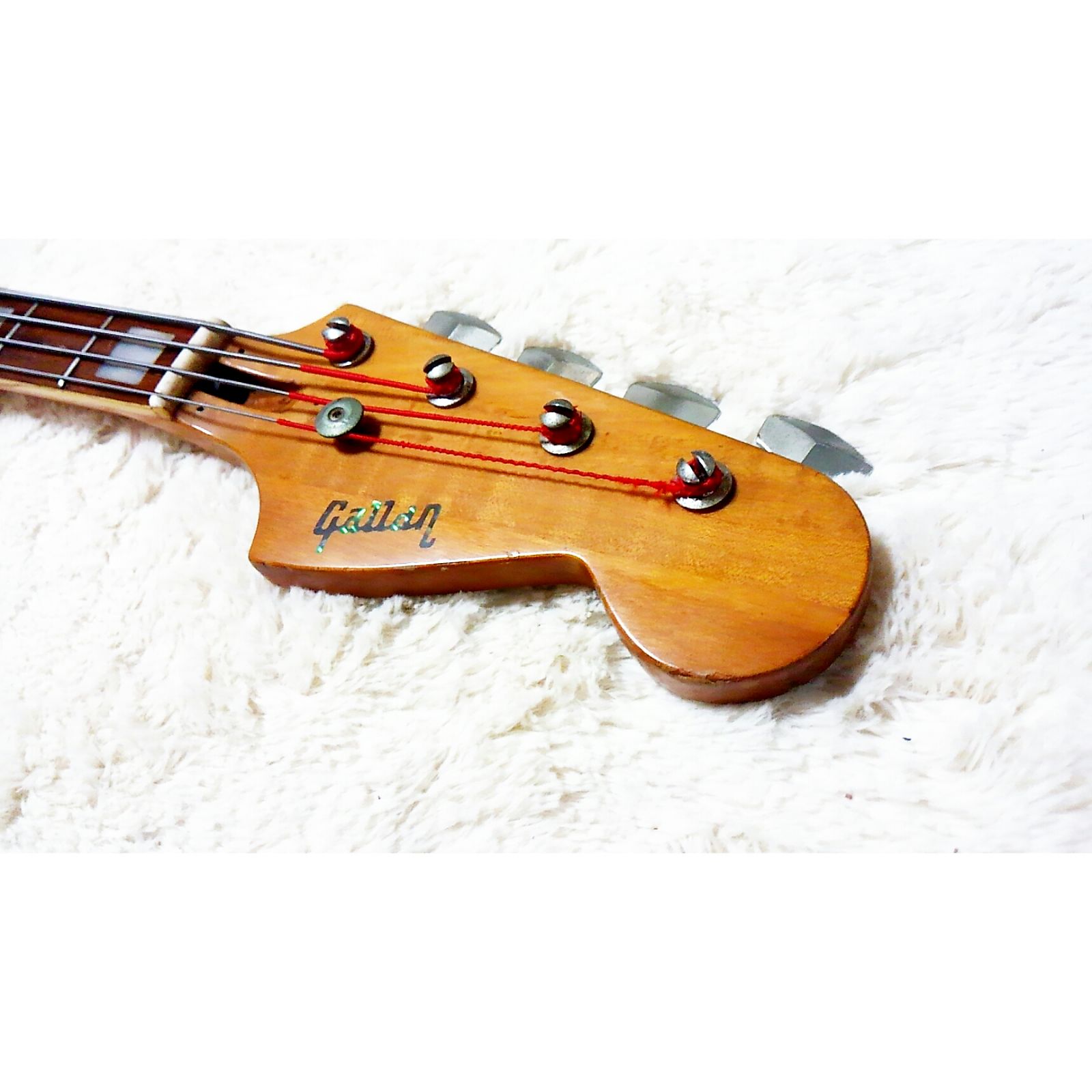 You can see similarities to your bass, and also differences. So perhaps it's a "Gallan" of some sort. The seller (Japanese) describes it this way:

...This bass, although a kind of budget build back in the day,that went for around 35000JPY, is a very decent Jazz bass. The neck is 3 pc maple, rugged and reliable, and is still healthy with an operational truss. The body is most likely plywood with maple laminate on top and back, the fretboard is rose with abalone inlays and white binding. The scale is 34" and all the hardware, circuit, pots and pickups are original!

It was made for Kyowa-shokai corporation by the Matsumoto Musical Instrument group, meaning Matsumoku most likely made the neck and the rest maybe was outsourced to other builders. This was one of Kyowa's first brands and was later replaced by their slightly higher grade Fresher brand in the mid seventies.

As you can see, that instrument is probably made from parts coming from different sources, and the name "Gallan" was subsequently replaced with "Fresher". So maybe yours is "Gallan" or a "Fresher" or maybe some other name entirely, built by someone else, using some parts from the same source used to build the Gallan.

Note that your bass has a few interesting features that could make exact identification easier:

Your best shot at getting a good ID for it online will be here: TalkBass.com - Bass Guitar Instrument Discussion - if there's anybody around who might be able to ID it, they will probably be found on that site. You'd have to become a member of the site to post the question - it's free.

On an additional note, a recommendation of strings I should use to replace the old ones?

Hard to recommend strings without knowing what style of music you intend to play, and what the length of scale is. (It's probably 34 inches). We also don't recommend specific products here on this site.

So I'll just say that a good quality medium gauge, long scale (34 inches), nickel, round wound string for 4 string electric bass from D'Addario or GHS are good for general use. There are many brands, but those two are very popular with a great number of players. DR, LaBella and Ernie Ball are other names name you'll often see. Personally I have used only D'Addario or GHS string for many years.

Important A word of advice: If you intend to try and sell and make a few bucks (It's possible if you put in some effort, although as mentioned, not a great fortune), do not modify or fix it up in any way. (You also put in a picture of the cord, but that's separate from the bass and is worthless - likely it's flaky too.) Whatever value it might have is because of its original "vintage" condition. If you change it somehow, you will immediately diminish greatly whatever value it has. You can clean it up and polish it (be careful you don't rub off the finish), but don't change anything on it - no new strings, new tuning pegs, new pickup, new finish, new knobs, etc. Handle it with care and put it back together carefully, since you've now taken some of it apart.