Learning the Circle of FIfths

I have been playing guitar and bass for over 10 years but never learned the circle of fifths (never even heard of it until recently). When you play in blues/alternative/covers bands, that sort of thing does not come up all that often.

I can understand the "fifths" part, and I know relative majors/minors, but the circle itself confuses me. I don't really understand it.

I've been through several youtube videos over the past few months and am none the wiser.

Could anyone recommend any simple resources on this and/or related subjects?

I apologise if this is too broad, but I don't really know anything about music theory so it is difficult for me to be specific. A case of "not knowing what you don't know"

I use the circle of fifths to find out what the diatonic chords are in a given key. For example, just pick any key on the circle. let's take C major, then take itself and its immediate neighbors: Cmaj (I), Gmaj (V), Fmaj (IV), Eminor (iii), Aminor (vi), Dminor (ii). So these are the 6 main diatonic chords of the key of Cmaj. Note that the diminished chord is not shown, but that's fine because diminished isn't used as much anyway.

Also note that anything on the inner circle is the minors, and the outer circle is the majors. You can use this technique to find all diatonic chords of a minor scale as well. Just take the immediate neighbors as mentioned above. If you noticed both Cmajor and Aminor share the same diatonic chords - this because Aminor is the relative minor of Cmajor. 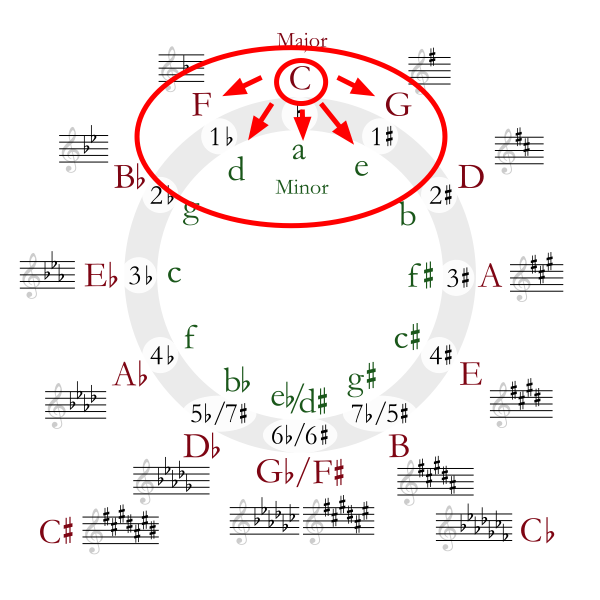 This site has some stuff and some pictures. You can Google for others. https://ledgernote.com/columns/music-theory/circle-of-fifths-explained/

Basically, the circle of fifths (also known as the circle of fourths or cycle instead of circle) is an arrangement of keys by fifths, C-G-D-A-E-B-F#-C#-Ab-Eb-Bb-F-C. Enharmonics (C# & Db, etc.) are treated as the same note. Thus we have ordered the 12 notes of the common chromatic scale by fifths. This does have a point, it's not just rearranging by another interval (although the only possibilities are 1 or 11 or 7 or 5 half-steps.) Melodies (chromatic) tend to be organized by step and harmonies tend to be organized by fifths. The accordion bass side is arranged by this circle of fifths to make transposition easy. Note that transposing from (for example) the key of D to the key of g entails moving all notes up by 5 half steps using the sequential ordering. The chord patterns can be found by moving the chords (centered around D in the original) to being centered around G in the cycle of fifths. (Makes accompaniment easy for accordion players.)

Another use is to consider the diatonic cycle of fifths (arranging a major scale by fifths) for example C: C-G-D-A-E-B-F or Bb as Bb-F-C-G-D-A-Eb. Then the most common chord patterns occur in this shortened cycle. One of the fifths is a diminished fifth (and this means that the scalar patterns of the 7 notes differ from each other unlike in the chromatic case.) If we take the tonic as I and write the diatonic cycle this way, we get, IV-I-V-ii-vi-iii-viv0 for a major scale (starting one step below for later comments; it's still a circle) and iv-i-v-ii0-VI-III-VII for the (natural)minor. Note that common chord sequences are next to each other in this arrangement. (I-IV-I-V-I or I-vi-ii-V-I) etc. Knowing this, one can often accompany a song without having heard it before. This works pretty well for most music written from 1600 to 1900 and most popular or jazz or country or folk music written from 1600 to 2017. It's a useful map to make it easy to visualize harmonic movement.

The circle of fifths basically demonstrates how one key/scale is connected to the next mathematically, fourths one direction and fifths the other direction, both major and minor, and how a person may start at any point on the wheel and work around the wheel and eventually end up right where they started. It seems that might be the reason it's charted in wheel form as opposed to another type of linear chart. It's also effective in illustrating which scales are enharmonic and how that works and study of the wheel helps folks to better understand key signatures and why the sharps and flats in key signatures are arranged the way they are. It's pretty handy information for many musicians.

Giving up on the Circle? Say it ain't so. You have a simple resource on hand: it's your guitar fretboard.

A fifth is an interval. An interval is a distance between two notes. You measure this distance by counting the letter names from note to note. C to G is a fifth (you need to count C as 'one').

To visualise fifths, play any note on your E string then go up one string and two frets. You have ascended a fifth. If you keep going (across a string and up two frets) you have ascended another fifth. You can do it one more time before the pesky B string interferes (it is tuned a third up from the G string, but that's another story).

That's it. Just mess around with it for a while (maybe a week, maybe forty years) and let it stew and assimilate. If you play large and small barre chords, that will help you visualise things.

Next time you look at the circle just pick two adjacent keys and try confirming it using your fretboard. It might just help you bond with the circle.

Recently someone asked me this same question and I honestly couldn't recall any circumstance where I had to use the circle of fifths. I had known it for decades but it was always just something pretty and round that sums up some basic music theory, which musicians have learned by heart and use regularly. For example, finding the secondary dominant, dominant chords, etc. Do you need a chart for that, not really, but yeah having a chart can help. You can also count, and you may know it so well that "counting" just doesn't take long.

What's the V-I chain starting from C? We don't really need a chart. But for beginners, having a chart helps. It visualizes the progression.

So to me, its is a learning tool. A tool to help learn the key signatures and perhaps the V-I or I-IV chordal relationships (given it's fifths in one direction, and fourth the other way). It's not really something you need in a jam session or to communicate efficiently with other musicians. Because at the end of day, you want to know by heart whatever this circle is summarizing/telling you.

Did you encounter any situations where you think you really needed to know this circle? If not, I wouldn't worry about it.

I asked a few of my colleagues who performs in many different genres professionally and they all seem to agree with me.

Having said all that, I think the circle of fifths is still a pretty chart to look at and get excited about how much information can be packed into this beautiful round thing. Here is an article that talks about circle of fifths and the practical use for learning theory. https://www.libertyparkmusic.com/the-circle-of-fifths/

All this mathematical stuff and diagrams people add to this simple circle is just confusing.

You don't actually need the circle

This is a little thing I like to call, "The circle of fifths without the circle."

You can get the keys with sharps just as easily by counting correctly without the circle, so how do you count?You start by counting from C Major, C Major has no sharps or flats, you then count 5 forward for the key and 4 from that same place for the sharp.

You then also have to remember that new keys keep old sharps, this means that each new key will keep all previous sharps. So let us count.

G Major the key with one sharp has an F#

Now onward from G this time.

Now we count onward from D

New keys keep old sharps, it will have an F# and C#.

A major has both a F, C and G sharp

E Major is the new key, new keys keep old sharps, it will have an F, C, and G sharp.

B Major is the new key and will keep all previous sharps, it will have an F, C, G, D sharp.

And now for the last one, the one with all the sharps. We count 5 forward from F# for the new key. F, G, A, B, C. We remind ourselves that C Major has no sharps or flats the key with seven sharps is actually C# Major.

Congratulations you have now succsessfully gone from zero to seven sharps. 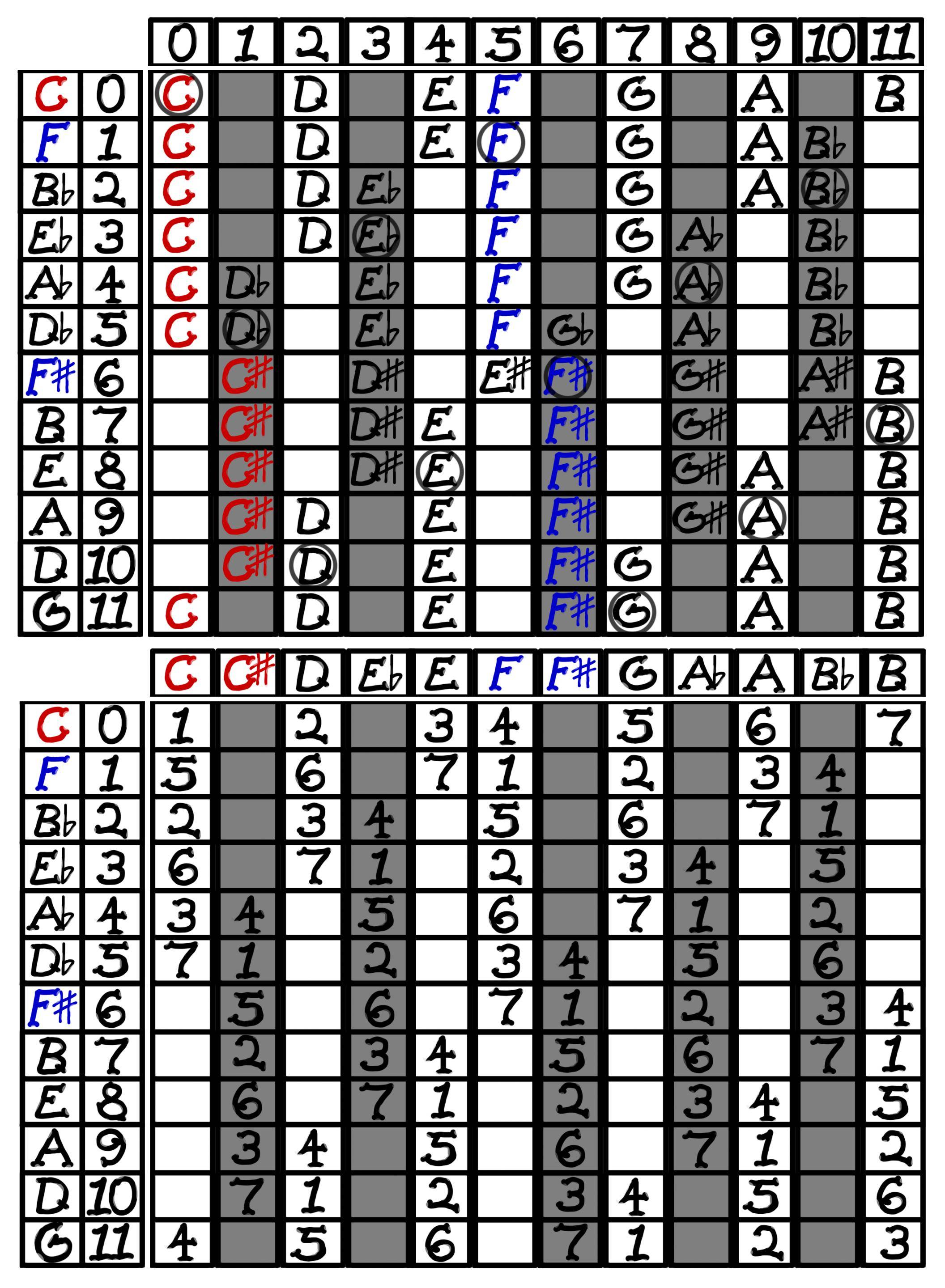 Here's a resource I made for myself that I think might benefit you. It's a list of all the major keys in the circle of fifths order. When you get to the last key it repeats and you go back to the top, just like the circle. This time though, I include the scale notes and then those notes as scale degrees, all in a one octave range like a piano keyboard (or guitar fretboard on one string). The scale degrees not only tell you where that note falls in the scale, but also which chord it is.

If you'll notice the order of the scale degrees is always the same: 4-1-5-2-6-3-7. Each note is present in 7 scales, with 2 of them being a half step away from the next note in the sequence. For example, knowing this order you can find the quality and function of any C chord. In G major it's 4, which is a major chord. In C it's the 1, major of course. Going down another 5th it's now the 5, or the dominant. In the next three keys (Bb, Eb, Ab) it's a minor chord and finally in Db it's a diminished chord. This can make modulating easier by finding common chords or common tones. Since C minor is present in both Eb and Ab this can be used as a pivot chord.

Alternately, you can see how scales transition between each other. Sharp scales always change the 4 to a 7 by moving it up a half step. On flat keys it's the opposite; 7 is flattened by a half step to make it a 4. You'll see this creates a chromatic scale going diagonally across the chart. It's really quite a useful tool, but not always necessary to think about when playing.

The Circle of 5ths is an illustration of something that you probably understand pretty well already. If you're playing a song in C major, you know that it's common to throw in an E7, and you know where it's very likely going to lead to (A7, D7, G7, C.) If you play jazzy styles, you have probably also absorbed the fact that instead of Dm7, G7, C you can play Dm7, Db7, C.

You can describe the first as 'circle of 5ths', the second as 'b5 substitutions'. But that's just labelling - you were doing it anyway! Don't worry about LEARNING the circle of 5ths. Just recognise it in what you're already playing.

Yes, if you go all round the circle of 5ths in a string of secondary dominants you end up where you started. A fact that, to my knowledge, has no practical application whatsoever!