Is there a defined note for the triangle?

Do all triangles sound the same note in the same octave, or are there differences between models?

There are many differences, both in pitch and timbre. I've seen triangles used with a 10" side length down to 4", and you can purchase them made out of a variety of different materials and construction methods.

Some pieces even call for three different triangles of different pitch. So no, there's no defined standard pitch. A percussionist just chooses the triangle that he finds most appropriate for the style of the piece (which the conductor may override if he/she feels differently).

Not only that, but orchestral percussionists will carry around a set of triangle beaters of different sizes and weights to further fine-tune the tone of the triangle.

The thing about triangles is that their overtones are not integer multiples of their fundamentals. I'll show you what I mean:

In the beginning, there were sine waves. Well, not really, but they are the simplest waveform. Waveform influences timbre, and the sine wave is composed of one sine wave:

The sine wave is cool, but it is boring to listen to. But we can take all the sine waves with frequencies an integer multiple (2x fundamental, 3x fundamental, etc.) of the first one,and add them together to get (after messing with the relative amplitudes) a square waveform! 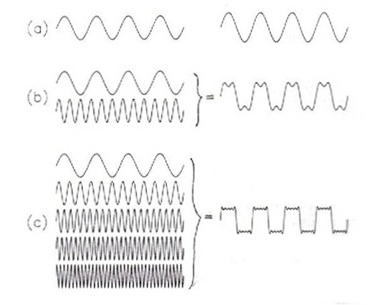 Now, most musical instruments naturally produce some variation on this or a similar waveform (those variations are one reason you can tell a violin from a flute). The instrument itself will usually vibrate in multiple ways, which is what creates the multiple sine waves. Our ears, amazingly, hear all the combined sine waves as one note.

However, a triangle is different. Ideally, the overtones are exact multiples. Though no musical instrument produces overtones that are perfect multiples of the fundamental (except maybe violin and a few others: https://en.wikipedia.org/wiki/Inharmonicity), triangles are so imperfect (by design) that their overtones are too far away from the integer multiples and our ears and brains do not perceive them as having a fundamental, instead hearing a noise. They do have one, but it's near impossible to determine it aurally and has no use musically. Because of this, I presume that not all triangles sound the exact same note, but that it doesn't matter; a triangle will sound okay in any key as a percussion sound. This also explains the same phenomenon in drums and other unpitched percussion instruments.

That said, some pieces will call for multiple triangles, and their different frequencies can be used to some effect (but I doubt anyone's tried triangle triads).

Not the answer you're looking for? Browse other questions tagged percussion or ask your own question.

4
Adapting music for the alligator xylophone for my son
4
Ηow can I replicate the sound οf this instrument?
4
What should I think about when acquiring a triangle (percussion)?
2
What is the name of these tubes, that emit sound when being swung?
2
Is there a word for drum beats that sound like a heartbeat?
3
Is a triangle okay for rock music?
4
how do you get the pitch of a triangle to get higher or lower?
3
Mnemonic or memory aid for Xylophone, Glockenspiel, Marimba, and Vibraphone
7
Note with two stems in snare drum part [Ravel's Miroir]: What is the result?