How does 8va work on a staff with multiple voices?

I am writing a piano score and at one point I have a bar with multiple voices, one of which is quite high above the staff. 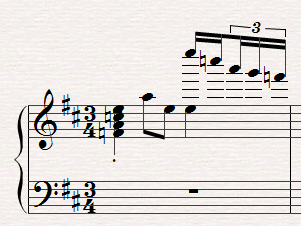 I would like to write the top voice with 8va to make it more readable, but I'm not sure if it would apply to the lower voice or not. Which of these is the correct way to write this? Or is there a less ambiguous way to notate this? 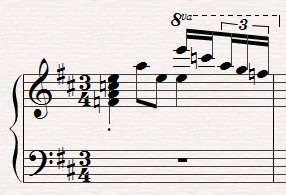 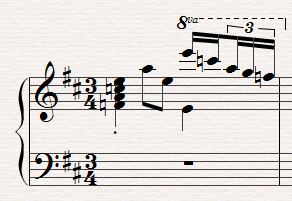 An octave sign applies to all parts on a stave. A note written with an octave transposition should not share a stave with a note to be played simultaneously at pitch (loco) if there is a feasible alternative layout. Transfer either the ottava or the loco pitches to another stave. If necessary, add a third stave for this.

Thus, if the notes you showed were the only ones played at that time, you have (at least) two options:

If these are not possible for some reason (e.g. because there is separate activity in the bottom stave for the left hand), you should either:

¹I tried to make an example of this, but it turns out to be pretty hard to convince Sibelius to do this. An example is given in Gould's book (p. 325).

The 2nd version is correct. Maybe to make it look neater you could start the 8va sign on the 2nd beat (of course lowering the A and E quavers an octave on the page).

3
Unplayed 2nd voice in notation - spaces or rests
1
Switching between voices on a multi-instrument staff
4
Is it common to combine multiple voices in one piano staff, even if they don't fit the time signature?
7
What's the name for when you write multiple voices on same staff? And are there any cons?
3
How to condense an SATB choir section with mixed dynamics, voices & hairpins
2
Confusing Bar (Multiple Voices)
3
Music Notation (in Musescore) - Ties or Separate Voices?
4
How to beam multiple voices correctly
5
Is the number of voices determined relative to the bar or to the phrase?
4
How to notate a phrase than goes up and down several octaves